↓
Home→Detroit→Detroit Before Edward Stiling – Part I

In the published accounts of the history of Detroit (now known as Florida City), Edward Stiling is portrayed as the founder of the town. The true story, as is always the case in history, is quite a bit more complicated. Stiling has achieved prominence in the historical record because he came to Florida City in 1910 and stayed there for the rest of his life. He, with four others from Detroit, Michigan, started a tomato canning plant in 1913; served as mayor from late 1916 to 1920, was active in agricultural and civic affairs in the area, was a well-known real estate agent and his daughter, Octavia, married Lee H. Lehman, who was a prominent businessman in Homestead. While he played an important role in the founding of Detroit, other men from Lawton, Oklahoma; Topeka, Kansas; Henry, Illinois and Knoxville, Tennessee also contributed greatly to the establishment of the town. James M. Powers and his sons worked for the Miami Land & Development Co., Charles S. Hough, from Lawton, Oklahoma, was the first marshal and helped establish the first church in Florida City, Dr. Benjamin F. Forrest, of Henry, Illinois was the first mayor and Andrew H. Love, from Tennessee, owned a real estate company, the Biscayne Bay Land Co., which promoted Detroit real estate in Knoxville. Then, there were all of the homesteaders who were busily selling off their claims for a tidy profit shortly after they proved them up. While Stiling did bring the first group of people to Detroit in October of 1910, there were plenty of other people whose presence contributed to the establishment of the town.

An article published in the Homestead Enterprise on March 30, 1923 gave a very brief history of Florida City up to that time. The anonymous author wrote that before the group of people from Detroit, Michigan arrived, “[t]here had been homesteaders there before them, J. S. Caves, the Hunters and one or two others, but there had been no organized development.”1 This statement is debatable, because Jesse S. Caves’ property was just outside of the future boundary of Florida City (as was Henry Brooker’s, who was not mentioned in the article and who filed his claim 2 years before Caves did) and William H. Hunter owned 10 acres of land within the future town but did not live there. There was a resident who did settle in what became Detroit in August of 1910, before the arrival of the group from Michigan. He was one of the “one or two others” noted in the article but he has never been mentioned in any of the histories published so far. His name will be revealed in part II of this article.

The F.E.C. Railway reached Homestead on August 30, 1904 and there was a brief halt to construction activity until April of 1905, when work began on the Key West Extension. 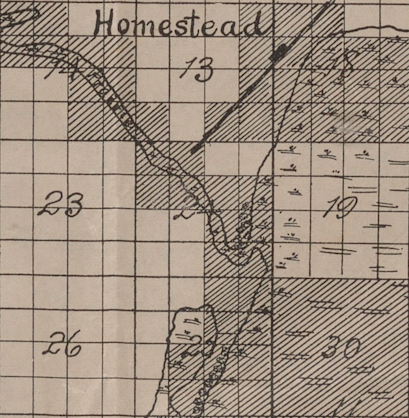 The Land Holdings of the F.E.C. Railway Co. in 1903 in the Detroit Area

This map, drawn in December of 1903, shows the route of Flagler’s railroad extending southwest, past Homestead. When William J. Krome completed his exploration of the Cape Sable country in June of that year, his proposed route was not included on this map. Instead of going to Cape Sable, E. Ben Carter, the civil engineer in the Jacksonville headquarters of the F.E.C., in consultation with others, made a decision to stop at Homestead and explore other options. The route finally decided on was to go to Key Largo, passing through the small settlement of Jewfish, on the mainland just north of Key Largo. The railroad route turned south just past Homestead and proceeded south-southeasterly through the east half of the southeast quarter of section 13, crossed the land in the north half of the northeast quarter of section 24 (the two squares that are not marked with diagonal lines) claimed by Horace K. Roberts on September 6, 19042 and continued to a point a half-mile south of present-day East Palm Drive on the eastern boundary of section 25 and then took a more southeasterly turn down to Jewfish Creek.

The work of building the roadbed for the track-laying machine below Homestead was largely completed by African-Americans, but documentation of their contributions is not easy to find in the newspaper accounts of that time. An article that appeared in May, 1905 in The Daily Miami Metropolis stated that “[t]he operations now being pursued on the mainland south of Cutler, or Homestead, the present terminus of the road and consists of grading, fully one hundred or more negroes being engaged in the work. The better part of these negroes were secured in Jacksonville and came down a few days ago in a special car, which was switched from the main line to the extension and taken to Cutler without a change. The others were secured here and it is said that the company will continue until at least one thousand hands will be engaged in this great undertaking.”3 On July 25, fifty more negroes from Jacksonville arrived in Miami and were “taken to Homestead to work on the extension of the road from there to the coast4 and on October 10, “another large bunch of negro workmen for the Key West extension operations came in from the north.” They were “hastily transferred” from the train to the steamer Biscayne and “they were off to the wilds of the lower coast.”5

Three years of planning by John S. Fredericks, William J. Krome, Berte Parlin, William P. Dusenbury and many other civil engineers whose names are likely lost to history laid the foundation for the work that started then. The enormous project of building the Key West Extension started on Key Largo and Long Key and proceeded in both directions. Work on what is today known as the Eighteen Mile Stretch started from what would become Detroit in mid-September of 1905. 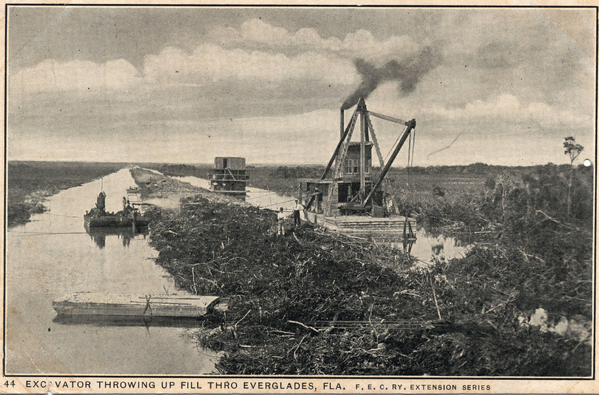 “The two dredges being built by the F.E.C. Railway at Homestead are now nearing completion and as soon as they shall have been done, they will be set to work cutting themselves out of a canal through the land eighteen miles or more in distance to Jewfish Creek, where they will emerge into the open waters of the coast. This canal will be mostly through prairie and low land and will follow the route of the railroad from Homestead to the coast, the soil removed being thrown up to form the bed of the road. The crafts will be launched into miniature pools, or lakes, already dug for them and from which they will begin their trip through the land to navigable waters.”6 These dredges had no name – they were simply designated as “Dredge No. 1” and “Dredge No. 3.” After completing their work, they were towed down to Long Key, where they were put to work building the viaduct there.7 There were two additional dredges, the Mikado and the John Babcock, that worked their way north from Key Largo. The dredges completed their work in early July of 1906 and the rails reached Jewfish Creek on December 1.8

With the completion of the tracks to Jewfish, engine No. 11 was dedicated to bring supplies from the Miami Terminal Docks in January of 1907 and the bridge across Jewfish Creek was placed in service on February 5, 1907. This was an important achievement, because supplies were now routed directly to Jewfish Creek, shortening the route to the Keys by 50 miles.9

The country south of Homestead was now easily accessible. All of the land eligible for homesteading within one mile of the Homestead F.E.C. depot had been claimed by the end of 1906 so this area became the new center of homesteading claims. A rough trail was cut through the virgin Dade County pine forest following the section line that became Palm Avenue towards the Everglades and numerous homestead claims were filed, starting in 1910, west of what was to become the town of Detroit.