The Tatum Bros. Real Estate & Investment Co., which founded the town of Detroit in 1910, relentlessly promoted their property as a place where buyers could become wealthy practically overnight by growing tomatoes and other vegetables. However, there was a problem with flooding. To overcome that, the Tatum brothers had canals dug to drain the land. The first canal, called the Central canal (now known as the Florida City canal), was completed in early January, 1912. Work then commenced on a north-south canal which had no name but ran parallel to S. W. 162 Avenue and connected the Central canal to the Michigan Street canal (now known as the North canal) which runs to Homestead Bayfront and Biscayne National Parks.

In addition, an area called the Terminal Basin, which ran in a north-northwest to south-southeast direction 60 feet wide and 900 feet long, was excavated south of Palm Avenue (now Palm Drive) and east of the railroad (now the busway). These projects were completed in August of 1914.1

The lots fronting on the Terminal Basin provided an ideal location for businesses to be established to process and market the crops being raised on the Detroit valley land to the east. The Hardee & McFarland Company and the Simmons Packing Company erected packing houses on some of these lots.2 In them, men, women and children sorted, washed and packed the tomatoes, beans, cabbage, lettuce, beans and squash being grown in the fields for transport by rail and water to markets further north. Small boats regularly plied the waters of the canal,3 taking vegetables to markets in Miami. One company, the Biscayne Transportation Co., offered a rate of “.45 per crate of vegetables from Florida City to New York, Philadelphia, Baltimore and other northern ports.” Cabbage could be shipped for $9 per ton. The cabbage, when it reached New York City, commanded a price of $150 per ton.4

Ice was an essential product to keep the vegetables fresh. As early as 1903, the Florida East Coast Ice Company, owned by Henry Flagler, manufactured ice in Miami.5 After the rails reached Homestead on July 30, 1904, ice and other products became readily available. The construction of the Key West Extension, which continued the railroad through Detroit and into the Florida Keys, started in April of 1905. The ice manufacturing business was very competitive and by late 1913, there were three ice manufacturers in Miami: the Florida East Coast Ice Co., Miami Cold Storage & Ice Co., and City Ice Co.6 Perhaps because the additional freight charges to bring ice to Detroit made it too expensive, the Miami Land & Development Co., established in 1911 by the Tatums, saw a profitable business opportunity and organized the Detroit Ice, Light & Power Co. on July 20, 1914.7 An application for a corporate charter from the State of Florida was filed on October 12, 19148 and construction of the plant got underway in early December.9 The company, which made its first ice on April 19, 1915,10 had an initial output of 15 tons of ice per day.11 By 1923, the plant was producing more than 40 tons of ice daily.12

In addition to ice, the plant also provided electricity to customers close by. The steam engine that powered the compressors for the ammonia used to manufacture ice also powered dynamos to generate direct-current electricity. No research has been done regarding the production of electricity by the Detroit Ice, Light & Power Co. so it is not known how many customers the company had. It is likely, however, that the service area was small, perhaps just to the businesses located in the area of the terminal basin. The dynamo only operated while ice was being manufactured so the availability of electricity was very limited. It was not until well after December of 1917, when Homestead’s first power plant went on-line, that residents of Florida City were able to have electric service installed in their homes and businesses.

The plant was built on lots 43 – 50 of the Industrial Addition13 and a railroad spur serving the Industrial Addition was completed in early December, 1914.14 A packing house, 70′ x 150′, leased by the Hardee & McFarland Co., was added to the ice plant on the east side, nearest the waters of the Terminal Basin.15 This packing house opened for business the week of January 25, 1915 under the management of Mr. Roberts.16 17 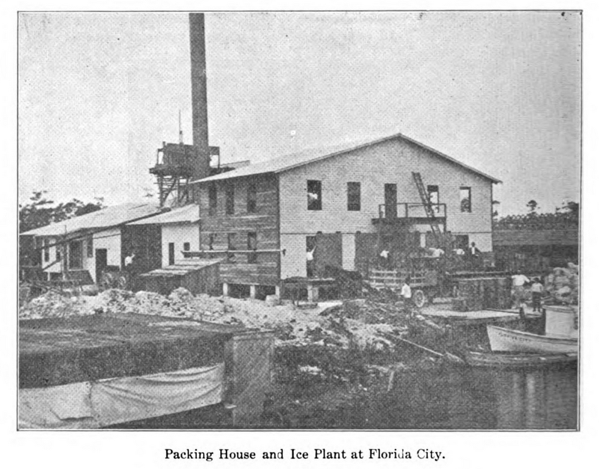 From an article in The Tropic Magazine18 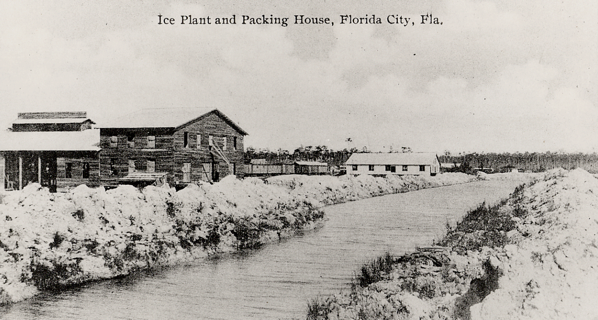 Detroit Ice, Light & Power Co. (left) and second packing house (right)
Courtesy of Seth Bramson
This photograph was taken from the south end of the Terminal Basin looking northeast. Between the ice plant and the packing house, box cars on the F.E.C. Railway spur can be seen. The concrete foundation for the second packing house, 72′ x 150′ and built by the Simmons Packing Co., was laid in late January of 1915.19

The Detroit Ice, Light & Power Co., with its tall smokestack, in the distance
Courtesy of the Florida Pioneer Museum
The ice plant is in the distance, a packing house is adjacent to it on the left side and the packing house in the previous photo is in the foreground on the right side. This photograph was taken from the north end of the Terminal Basin looking southwest.

The steam engine which powered the ice manufacturing machinery was fueled by wood delivered by contractors felling the virgin pine forests in the surrounding area. The DeBerry Brothers built a sawmill adjacent to the ice plant in early 1918 and supplied waste lumber to the ice company in exchange for steam from the ice plant engine to run their machinery.20

The Detroit Ice, Light & Power Co. was owned by the Miami Land & Development Co. so it is no surprise that James Powers and his son Ralph were among the initial directors of the company. Frederick W. Symmes, Marion G. Tracy and S. D. Bates were the others. Symmes was from Charleston, S.C. and was hired away from the F. E. C. Railway, where he had been an auditor based in Marathon.21 Tracy was a carpenter and contractor who had come to Miami in 1912 from the same neighborhood in Topeka, Kansas22 as Dr. John B. Tower, Orville W. Calkins, Roy D. Marsh and Hugh H. Ewing, all 1910 homesteaders in Longview, west of Detroit. Bates was the paymaster and cashier for the F. E. C. Railway in Marathon23 and was no doubt a friend of Symmes.

Frederick W. Symmes, a Spanish-American War veteran, was an insurance agent in Charleston, S. C. before he came to Miami in 1912.24 His son, Thomas H., was a physician.25 Frederick only lived in Detroit briefly before moving to Miami in 1916.26 He visited Florida City in September of that year when he was investigating the possibility of establishing another canning plant in Florida City. Edward Stiling and Walter C. Shutts, in partnership with three men who lived in Detroit, Michigan, had established the first canning plant in Detroit in 1913.27 Symmes and Irwin R. Matthews, a brother-in-law of Rev. Joseph A. Kahl, who established the South Florida Banner, Homestead’s first newspaper, had purchased a canning and pickling plant in Delray28 29 and were considering moving it to the Homestead area. After moving to Miami, Symmes continued to work for the Tatums in real estate development,30 31 was a director of the Miami Bond & Mortgage Co. (of which J. R. Tatum was president and Henry R. Pridgen secretary-treasurer)32 and was the vice-president of the Miami & Tampa Highway Co., which proposed to build a toll road to Tampa alongside the Miami-Okeechobee canal.33

Edwin Z. Duncan, elected to the Board of Directors of the Miami Land & Development Co. in January of 1916,34 was a wealthy capitalist from Oil City, Pennsylvania. Duncan had moved to Miami in May of 1914 and “purchased the Craig house at Point View,”35 a wealthy neighborhood on Brickell Avenue. He was elected president of the Detroit Ice, Light & Power Co. in early 191736 and Bethel B. Tatum assumed the presidency of the company in January of 1918.37

Throughout all of these changes in the membership of the Board of Directors of the company, Marion G. Tracy managed the ice plant. The company moved into the Miami market in late 1917 and its name was changed to the Dade County Ice Company in early 1918.38

By the mid-1920s, the market for ice exploded, there being 14 ice companies in Miami by 1927.39 In June of 1923, the Homestead Leader reported that the capacity of the factory was being taxed by the need for ice for pineapples arriving from Cuba on “the big F.E.C. ferries.”40 Tracy, who also owned the Tracy Lumber Co. in Florida City, purchased the Dade County Ice Co. in 1924 and then built a plant at Douglas Road and the F. E. C. Railway tracks.41 The Homestead Enterprise reported on April 17, 1925 that Tracy had purchased a plot of land near Avocado drive and the Dixie Highway, where he would build an ice plant with a capacity of 65 tons a day.42 The Florida City plant was still producing ice in November of 1925, as G. A. Kass had recently arrived “to take up the duties as engineer at the Tracy company ice plant in Florida City.”43

In March of 1926 Tracy sold the company to the South Florida Ice Co. for $700,000 ($9.9 million in 2018 dollars). The Florida City plant had a capacity of 30 tons per day, the Homestead plant 60 tons and the Coconut Grove plant 80 tons.44 The South Florida Ice Co. changed its name of the General Public Utilities Co. (GPU) a few days later and was authorized by the state of Florida to increase its capital stock to 600,000 shares, thus increasing its ability to acquire more companies.45 Between April and June of 1926, it purchased the Royal Palm Ice Co., founded in 1921 in Miami.46 47 It was located at the corner of N.W. 4th St. and 1st Ct. in Miami.48 In July the GPU purchased the ice business of the Redland Ice, Light & Power Co., located in Naranja.49

The General Public Utilities Co. was a holding company – it retained the company names and officers of all of its acquisitions. Marion G. Tracy, as president and general manager and his son Marion E., as secretary-treasurer, continued to be listed as the officers of the Tracy Ice Co.50 The Royal Palm Ice Co. plant in Homestead, located on lots 18 and 19 of block 3 of the plat of Seminole Heights, was listed as delinquent on the property taxes for its Homestead plant, located across the highway from what is now Seminole Wayside Park, in the July 30, 1932 issue of the Miami Daily News. 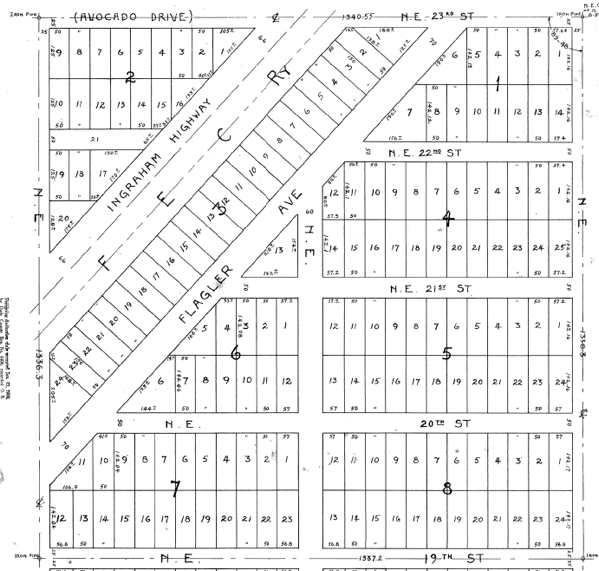 Tracy retired from his business in the early 1930s and moved to Ocala in about 1935. He didn’t stay there long before moving to Sanford in mid-1937.51 Shortly after moving there, Marion G. Tracy died at the age of 60 on March 14, 1938 and is buried in the Evergreen Municipal Cemetery.