Before the settlement of South Florida, the landscape looked entirely different. A narrow ridge of land, up to 10′ higher than the land to the east and west of it, extended from well north of Miami all the way down to what is now called Long Pine Key in Everglades National Park. Vast stretches of the land were covered with pine rockland forests. Some of the trees in those forests were 4′ in diameter and 100′ tall. Scattered throughout those pinelands were dense stands of tropical hardwood trees, called hammocks. 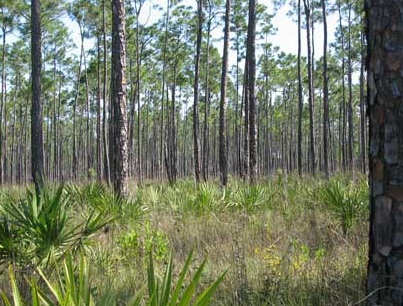 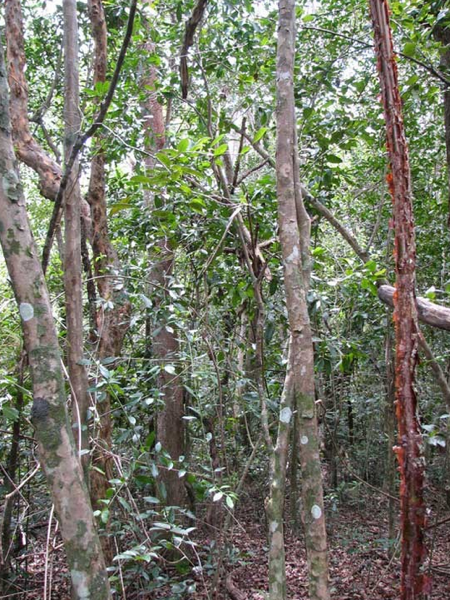 The Everglades stretched from Lake Okeechobee southwest to Cape Sable and the rock ridge, heavily forested with slash pines and tropical hardwood hammocks, formed a barrier that prevented the water from flowing southeast except through openings called finger glades. These long and narrow areas allowed water from the Everglades to drain into Biscayne Bay.

The finger glades opened up into the marl prairies on the eastern edge of the pine forests and what would become the route of the F. E. C. Railway from Miami down to Detroit. 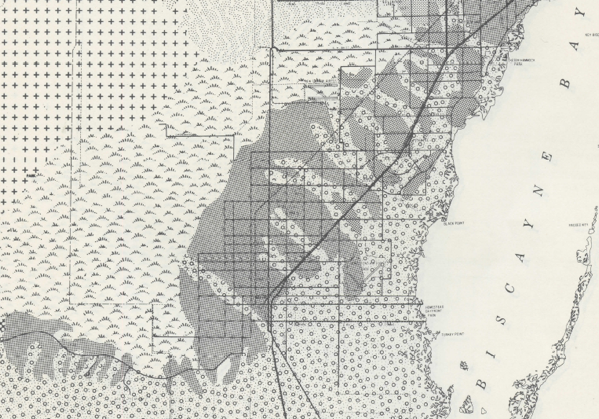 Map of Finger Glades in Dade County
William J. Krome, while working on his Cape Sable survey in 1902-1903, called these areas the “front prairie,” to distinguish them from the sawgrass prairies of the Everglades. The marl soil on these prairies was deeper and better suited to agriculture than the thinner and different soils in the Everglades.

The Tatum Bros. Real Estate & Investment Co. purchased a controlling interest in 9,720 acres4 of these lands from the Model Land Co., which was the real estate holding company of the F. E. C. Railway and from other private owners, including John Brand, who, with others, was the owner of a plantation known as The Cedars.5 In 1910, the Tatums started plans to develop their property into a settlement that would be called Detroit. They had closely watched the work of John C. Baile, who purchased about 1,000 acres of the front prairie east of Goulds. They decided on a different approach to controlling the water flow on their land: they would dig drainage canals instead of building dykes and installing pumps, as Baile had done.

The Tatums, relentless real estate promoters, touted their property as a paradise where any crop would grow in such abundance that new settlers would soon be millionaires. The area, they claimed, would never be subjected to flooding and, building on the disaster that was the 1894 – 1895 Great Freeze in Central Florida, they said that crops would never be damaged by cold weather.

The first group of settlers arrived in Detroit on October 28, 1910. Despite the promises of the Tatum brothers, flooding was a problem and many of the initial settlers left Detroit, never to return, after a flood in the spring of 1911 dashed their hopes of prospering in Detroit. No documentary record of this flood has yet been found, but an article in the Miami Herald on August 23, 1913, referring to Detroit, mentioned that “none of this land can suffer a flood such as overwhelmed the tomato fields of the lower end of the county last spring, and it is such a guarantee that the growers want.”6

The Tatum brothers, fully aware of the threat that flooding presented to their plans, organized the Miami Land & Development Co. in early 19117 and let a contract to the Miami Engineering and Construction Co. to dig a canal from Detroit to Biscayne Bay using a dredge. The machine was shipped down on the railroad and assembled at the intersection of Orange Street (now Krome Avenue) and Palm Avenue (now Palm Drive). From that starting point, the dredging crew worked east and exited into Biscayne Bay in early January of 1912 after cutting a canal “thirty feet wide and four feet deep.” It was a shallow canal as only the overlying marl was removed. Once the job was complete, the dredge was towed to Miami for overhauling.8

Flooding continued to be a problem even after the first drainage canal, called the Central (Florida City) canal, was finished. In October of 1912, the company installed a centrifugal pump capable of pumping 400,000 gallons of water an hour into the canal. The railroad filled in the culvert under the tracks at Detroit to “prevent water from flowing from the west side onto the Miami Land and Development Company’s land on the east.” They also removed “two dams south and west of the track” so that water would flow southward.9 Plans were made to deepen the canal, using dynamite to break up the oolitic limestone at the bottom so that the rock could be removed by the dredge, which had a 2 cubic yard bucket.10 The excavated rock was used to build a road on each side of the canal.

James M. Powers, who was the manager of the Miami Land & Development Co., advertised for workers in the Miami Herald. He complained bitterly about how lazy the men were:

“We can use fifty or more men right away,” said Mr. Powers, “but there don’t appear to be any in sight. I will wager I could go over to colored town and find a hundred men idle, but as long as they can live without working I don’t suppose they will break the charm. We have taken men down to our work and paid their fare as we are doing now, and they would skip out within twenty-four hours if not before. We want men and we don’t care whether they are black or white. The work is not hard, the quarters are comfortable, the pay is good and their money is ready every Saturday night and I don’t know what more they could want.”11

The Miami Land & Development Co. let the contract for the dredging to the A. B. Sanders Co., a well-known dredging company.12 13 That company then contracted with William C. Norwood to deliver 400 cords of wood, 20 cords each week, which was burned to operate the two steam-powered dredges used on the project. Their names were the ‘Marion”14 and the “Detroit.” Capt. Anderson was in charge of the dredge.15 Work was started at the east end of the canal in early May of 191316 and completed 10 months later. The initial contract for 400 cords of wood was supplemented with an additional 100 cords at the end of May.17 The total amount of wood burned approached 1,000 cords over the length of time it took to complete the project.18 The Miami Land & Development Co. marked the completion of the work with a big celebration and marketing event on February 19th and 20th, 1914. They gave free motor boat rides down the canal to the bay and held a fish fry on Friday night. On Saturday, they chartered a special train from the F.E.C. to bring visitors down and fed the crowds with a beef barbeque dinner that night.19 20

In November of 1913, before the first canal was completed, the Miami Land & Development Co. signed a contract with Emmett E. Collins, who excavated the Goulds Canal in 1920, to excavate another canal, parallel to and one mile north of the first canal.21 This canal, now named the North Canal, was originally named the Michigan canal, after Michigan Street on the plat shown below. This is the canal that empties into Biscayne Bay between the headquarters of Biscayne National Park and Homestead Bayfront Park. That work was completed on Saturday, August 1, 1914.22 There were plans to dig a South canal, one-half mile south of the Central canal, to be named the Iowa canal,23 but that project was never started.

After the two parallel canals were finished, a north-south canal, parallel to Farm Life Road (S.W. 162 Ave.) was excavated connecting them and providing a route for farmers on lands adjacent to the North canal to bring their produce to the packing houses in Florida City. Farmers did so by using trucks on the roads built adjacent to the canals. Men without the capital to purchase a truck used small boats plying the waters of the canals. That north-south canal, on the east side of the Villages of Homestead, has mostly been filled in. Only small portions of the canal are still visible and no one now has any idea of the history behind those “lakes.” 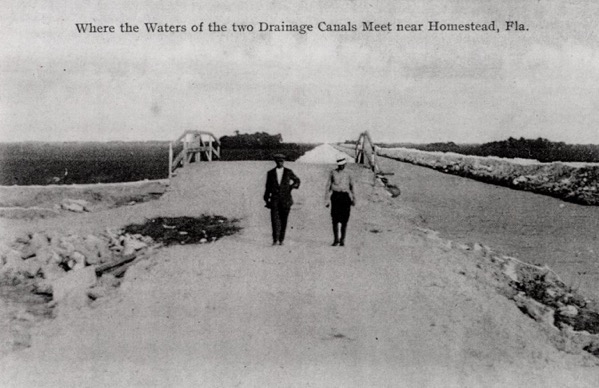 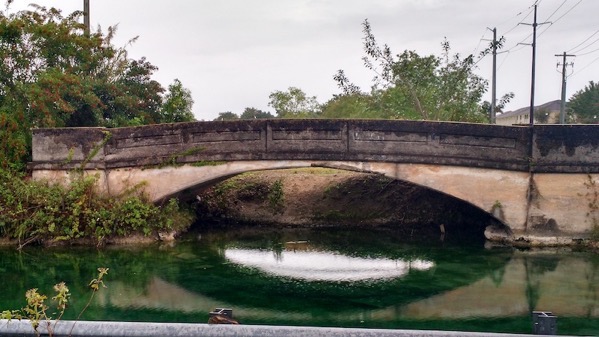 The bridge in 2020 looking north from the Florida City canal.

The Miami Land & Development Co. had more plans: a large basin near the railroad tracks where packing houses and other businesses could be located. As soon as the excavation of the North canal was completed, the dredge was floated back to the beginning of the Central canal, at Orange Street, to begin work on this project. Work started on Sunday, August 23, 1914 and was completed quickly, work being done around the clock.24 The Terminal Basin was filled in during the 1970s and is now the location of the Strano Brothers packing house complex.

“The connection from the central canal has been excavated and the basin is now being worked out. This will extend three blocks south, leaving a tier of lots between the basin and the depot, extending along east of the railroad one half mile south, also a frontage of lots on the east side of the basin. Including connections at the north and south, the basin will be one half mile long, giving a lot frontage of one mile, which will form Detroit’s industrial addition, having access to water and rail transportation and connected with the third canal, which will be constructed, beginning one half mile south of the outlet of the terminal basin, then east nine miles to the bay.”25

The office of the Miami Land & Development Co. was on the north side of Palm Avenue, across the street from the Industrial Basin. It is shown on the above plat. Download the plat by clicking on the title under the image and enlarge it – the location of the office is noted on the left side of the document. 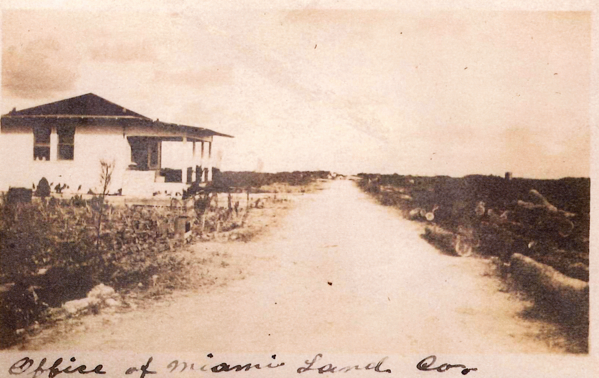 Courtesy of the Florida Pioneer Museum
The office was just a short distance northeast of the Detroit F. E. C. depot, which was just east of where Rosita’s Mexican restaurant now stands. 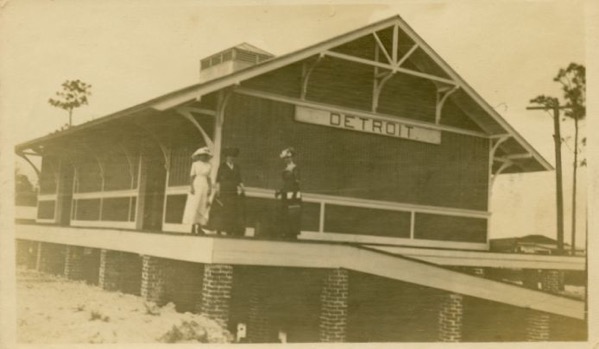