If you grew up in Goulds or Princeton, you know where Baile’s Road is. For those who never ventured far from Homestead as a child, Baile’s Road joins U.S. 1 at about S.W. 224th St., where the NAPA store is located. 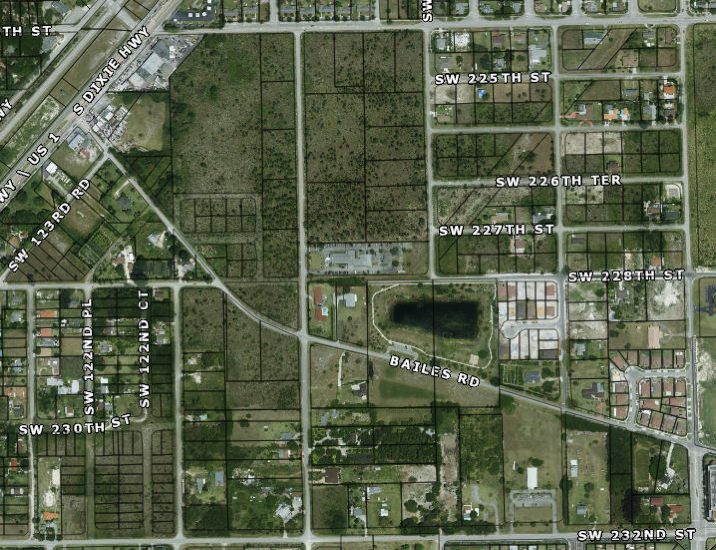 For years, I drove by the intersection and occasionally turned on to the road and ventured east but I never knew the story behind the road. A small patch of pine rockland has been preserved just east of the highway, which makes for an initial scenic drive. The road angles south and east and then merges with Silver Palm Drive before it reaches Allapattah Road.

Viewing the past from our small nuclear families in 2018 prevents us from understanding how important the network of kinship ties that governed life on the frontier in early Dade County was. In this post, I hope to show you some of those relationships as they pertain to Baile’s Road.

Baile’s Road is named after John Charles Baile, who was born on December 27, 1859 in West Alexandria, Preble County, Ohio. He was the son of John and Sarah Lovina Williams Baile. In the 1900 census of Warrensburg, Johnson County, Missouri, he was enumerated with his wife, Rosie, 28, their daughter Hilda, 6, and their son Kenneth, 4. He was a farmer, like the vast majority of his neighbors.

Also living in Warrensburg were John Collins Christopher and his wife, Minnie Claire. She was a sister of John Charles Baile and her husband was a prominent real estate investor. Another person of interest in Warrensburg was Nancy Jane Baile Roop, the wife of Ezra Roop. Nancy was the older sister of John Charles (J. C.) Baile and the mother of John A. Roop, who figures into the story after J. C. came to Miami.

J. C. apparently came to Miami in about 1907 with his cousin, John A. Roop. They immediately started investing in real estate, buying the Richardson Grove in January 1908 from Charles O. Richardson, who was nearly 91 years old, for the very low price of $500. That sale caused a bit of a controversy at the time. The real estate agent in charge of the sale was J. H. Tatum, one of the Tatum Brothers who were behind the Miami Land & Development Co., the developers of Detroit (later Florida City) and who was a third cousin, once removed, to Russell F. Tatum, the first mayor of Homestead. By 1910, the former Richardson Grove was known as the Musa Isle Fruit Farm and it was owned by Baile & Roop. Baile’s brother-in-law, Joseph C. Christopher (husband of Baile’s sister Minnie) came to visit in 19081 and no doubt invested some of his money in Miami real estate and probably staked J. C. in some his ventures.

J. C. Baile hit the ground running when he arrived in Miami. He solicited funds from Miami businessmen to build a highway from downtown Miami up through the Gen. Samuel C. Lawrence estate, past the pumping station at the head of the Everglades and then connecting to the Allapattah Road.2 There was an Allapattah section in Miami before there was an Allapattah Road in South Dade. Baile, who lived in Lemon City, north of Miami, agreed to furnish the poles and place them if the Miami electric utility would furnish power to his part of town.3 In 1908, J. C. and Florence Haden of Cocoanut Grove (of Haden mango fame) worked together to send fruits and vegetables to the Michigan State Fair, held in Detroit from September 3 – 5.4 By the summer of 1909,5 J. C. was a director of the Subtropical Laboratory Association, which was formed to support the research station in Miami that had been supported by the U.S. Bureau of Plant Industry. Funding for the station was eliminated after the 1906 hurricane that struck Miami and a severe freeze in December of that year. Another director of the Subtropical Laboratory Association was Walter Waldin, a prominent real estate investor and the brother of Bernhardt “Barney” A. Waldin of Homestead.

During this time period, J. C. acquired a tract of land east of Goulds from the Model Land Company that is variously given as anywhere from 400 to 1,000 acres. There were at least three people who were partners with Baile in this venture: William H. Owens, William L. Burch, and Thomas E. Cheatham. Who is associated with J. C. in his Baile Farm venture depends on which source is consulted. William H. Owens was a truck farmer who boarded with Charles W. Smith, who lived on 9th street in the 1910 census of Miami. Smith was a wealthy automobile dealer from Lawrence, Kansas who had 300 acres of tomatoes on the Baile Farm. William L. Burch was a truck (vegetable) farmer, who had retired from the Benner line, a merchant shipping line based in New York City. He built the launch Sallie and in 1903 “began regular excursions” up the Miami River.6 Thomas E. Cheatham owned a tailoring business in Miami and was the brother of J. Hubbard Cheatham, a wealthy merchant. They were natives of Viriginia and had come to Miami from Bartow, Florida in 1898 to serve the needs of the Spanish-American War soldiers in town at that time, according to an article by Howard Kleinberg published in the Miami News as the “363rd in a series of articles about early Miami.” The Cheathams lived in South Side, which, before it was taken over by the building boom of the early 2000s, was a wealthy residential area with numerous mansions west of Brickell and south of S.W. 8th St.

Baile very likely did not use much of his own money to finance his ventures, a tactic that was (and still is) very common.

By late 1909, the Campo Rico Trucking Company was advertising in the Miami Metropolis:7 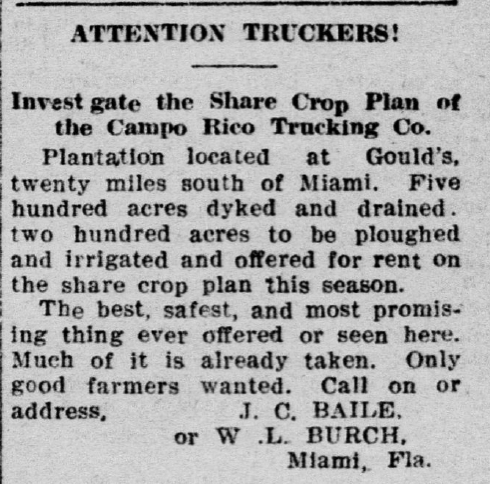 Farmers rented the land owned by J. C. Baile and his partners and grew tomatoes, cabbage, potatoes, celery, beans and other crops for the Miami market and for shipment to the North. Among the farmers were William Ira Peters, a brother of tomato king Thomas J. Peters; Leon M. Fornell, who was born in France; Anderson Lee Allen, the postmaster of Goulds, who was killed in 1922 in a train/truck accident;8 Charles W. Bush and John Strange. John Strange was an iron worker from Brooklyn who quit his job on the Key West Extension after the 1906 hurricane and settled in Goulds to become a supervisor for Campo Rico.

A crew picking tomatoes for William I. Peters
Photo courtesy of the Florida Pioneer Museum
J. C. Baile built a packing house at the corner of Baile’s Road and the County Road. The road was completed by late 1910 and just waiting for the County road roller to compact the surface.9 Baile’s packing house burned down in the 1920s. The packing house is shown on this plat of Goulds, from 1912. Click on the link under the image to download a larger version: 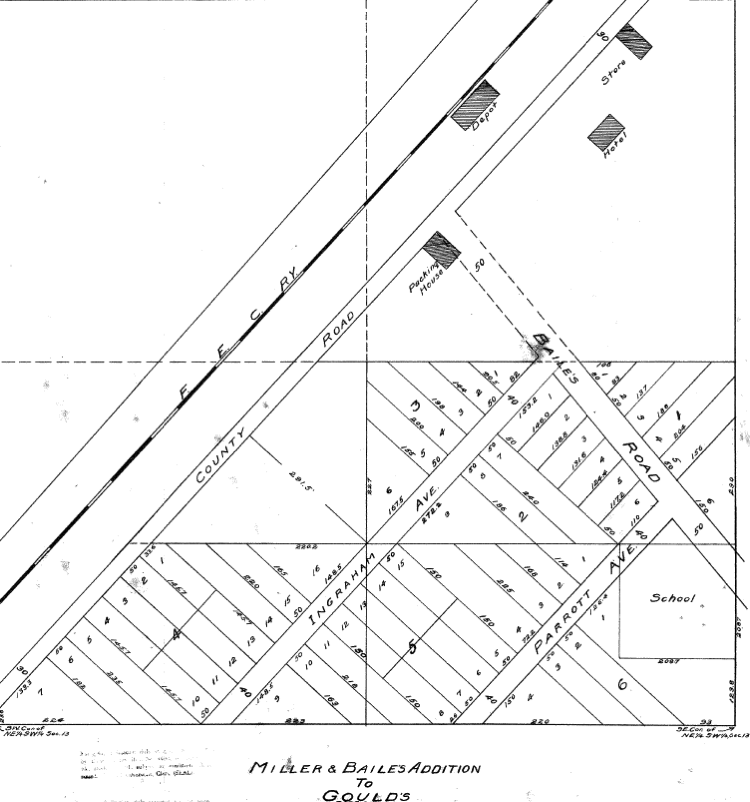 The Baile Farm was in the East Glade, roughly between S.W. 248th St. on the south and S.W. 216 St. on the north. Baile built a 1.5 mile long narrow gauge tram line before 191110 to carry the produce from the field packing house at about Allapattah Road and Silver Palm Drive to the packing house near the depot in Goulds.

This is a photograph of the packing house on Allapattah Road:

Engine No. 1 was powered by a 5 1/2 horsepower Ferro marine engine, according to the October, 1911 issue of the magazine Motor Boating.

Photo courtesy of the Florida Pioneer Museum
The packing house shown in this photograph was at the intersection of U.S. 1 and Baile’s Road: 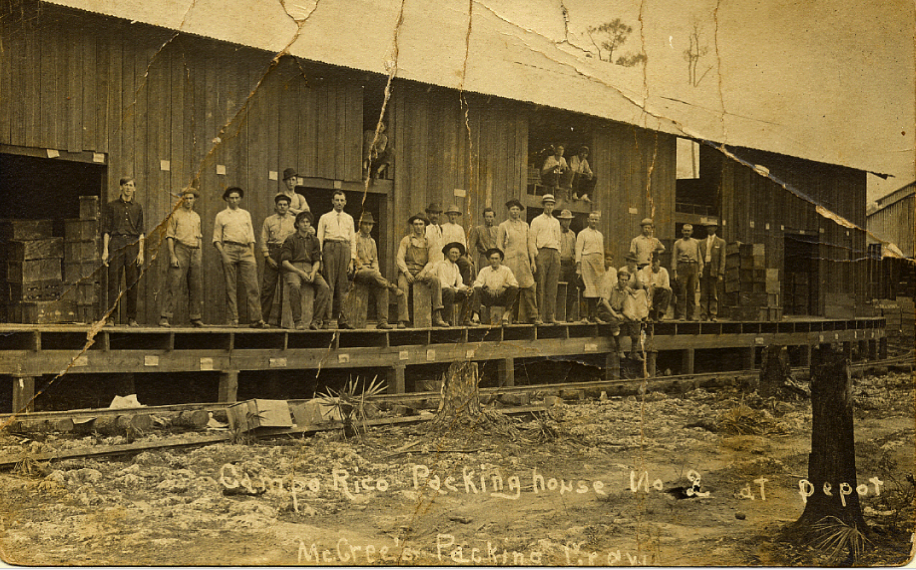 Photo courtesy of the Florida Pioneer Museum
People were very resourceful in those days – this photograph shows Engine No. 2, which apparently was a converted automobile:

Photo courtesy of the Florida Pioneer Museum
The Baile Farm struggled to be a successful farming venture. According to an article that appeared in The Country Gentleman in 1911,11 Baile had installed two drainage plants, each capable of moving 12,000 gallons of water a minute. But heavy rains overwhelmed them and destroyed farmers’ crops, a lesson not lost on the Tatum Brothers, who invested heavily in digging the Florida City and North (Michigan Avenue) canals from 1912 – 1914 to drain the land that their Miami Land and Development Company owned east of their planned community, Detroit.

Photo courtesy of the Florida Pioneer Musuem
J. C. Baile was involved in many other ventures besides his farm in Goulds. He had an interest in the Biscayne Bay Company, which purchased land on Miami Beach that was later developed by Carl Fisher. As a County Commissioner, he was the prime mover behind the creation of the Goulds Drainage District, which funded the construction of the Goulds Canal. He was also in charge of the construction of what is now known as the McArthur Causeway.