Writing the post entitled The Beginnings of Goulds led me to want to find out more about Lyman B. Gould, for whom the community is named. I searched through issues of the Miami Metropolis from the era, conducted census research on Ancestry and searched records on the Internet and FindAGrave for this post.

As I wrote in my previous post, Lyman B. Gould was born in Brown Township, Washington County, Indiana. His grandfather, John Gould (1790-1858), was in Washington County as early as 1840 and one of John’s brothers, Lyman, owned a store in Claysville in Vernon Township in 1830. It is likely that Lyman was the first of the Gould family to move from Ontario County, New York, where John was born, to Indiana. John had married Anna Hilton and they had at least 7 children, including Riley, the father of Lyman B., who was born in about 1823. In the 1850 census, Riley Harrison Gould and his wife, Sarah Irene Wheelock, were the parents of four children: William K., born in about 1846; Cynthia A., born in about 1849; Lyman B. Gould, born in July of 1857 and Samuel Lincoln, born in about 1860. Lyman was named after his uncle, who died in 1837.

Riley Harrison Gould enlisted in Company C, 56th Regiment, Illinois Infantry as a private on September 28, 1861 and was discharged on January 28, 1862. He re-enlisted as a sergeant in Company A of the 66th Indiana Infantry on August 3, 1862 and was discharged on June 3, 1865. After the war ended, Riley and his brother Norton moved their families to the Cuming City area in Washington County, Nebraska, where he was a farmer.

On October 15, 1876, Riley’s son Lyman married Henrietta Williams at Fort Calhoun in Washington County, Nebraska. He was 21 and she was 17. The 1880 census of Blair, Nebraska lists Lyman Gould as 24. He was a brakeman on the Sioux City and Pacific Railroad and was living in a hotel, which may explain why his wife was not listed. Lyman next appears in the historical record in Pueblo County, Colorado, where he married Sarah Catherine Berry on November 17, 1889. I was unable to discover the fate of Henrietta Williams. It is unclear why Lyman moved to Pueblo but the town was served by railroads and had a booming steel industry.

At some point, Lyman and his second wife moved back to Indiana, where they were living in New Albany in the mid-1890s. The first mention of Lyman B. Gould in Miami appeared in the September 2, 1898 issue of the Miami Metropolis where it was noted that “Lyman B. Gould, of New Albany, Ind., has been in Miami for some days prospecting for a future home…” Voice of the boom town that it was, the newspaper crowed on September 23 that Lyman had “struck it rich by finding a homestead a little over six miles west of town consisting of 160 acres…” His property was “four miles west of the Everglades schoolhouse.” He apparently quickly sold that property for a tidy profit and moved closer to Miami as a deed from Mary Brickell and her husband to L. B. Gould for $280 was listed in the May 5, 1905 issue for “lot 1, block 4 section 38(sic), tp. 54, range 41 east.” Since there are only 36 sections in a township, this property was likely in section 28, which encompassed the settlement of Cocoanut Grove. Lyman had owed taxes on this parcel as early as May 31, 1901 so he had been living on the property prior to receiving the deed, which may have happened when he paid for the property in full.

Gould regularly appeared in the Miami Metropolis from March 9, 1900 on.

In early August of 1901, Henry Harrison and Samuel H. Richmond petitioned the County Commission for a road to be built from Cutler to the southeast corner of 13-56-39 and then west to the southeast corner of 16-56-39. The committee appointed to lay out the road was composed of Charles Gossman, Thomas R. Pinder and Frank Caldwell. Gossman and Caldwell had filed homestead claims in 1898 and 1901 that would benefit from the new road.1

Click on the title below the map to download the survey of the Perrine Grant, showing Samuel H. Richmond as Land Agent. 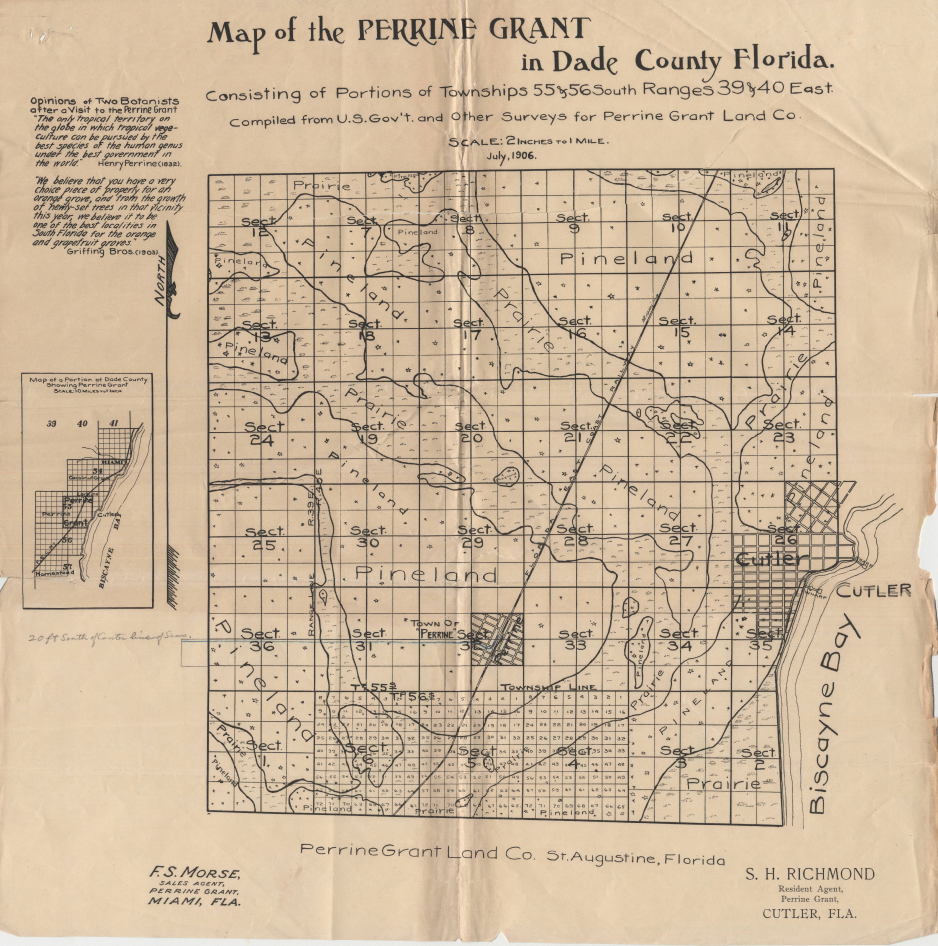 Courtesy of the University of Miami Richter Library

Lyman first appeared as a registered voter in the City of Miami in October, 1901. In October of 1902, he was a trustee on the incorporation papers of the First Methodist Episcopal Church in Miami.

Lyman’s wife, Sarah Catherine, was the victim of an assault by a “negro” on January 23, 1903 while she was on her way home from her job as a tailoress for the firm of Kronowitter & Worley in Miami. In the ensuing days, Miami was caught up in a racial frenzy and when the alleged perpetrator was caught, his whereabouts were not advertised for fear of a lynching. The assailant, one Richard Dedwilley, was tried and convicted to hang on February 27, 1903. The prosecution and defense rested after “two or three hours” and the jury returned its verdict in less than 15 minutes, according to the account in the newspaper. He was hung in the county jail yard on March 13, 1903.

The construction of the F.E.C. Railway from Miami to Homestead started in January of 1903. Charles T. McCrimmon had a contract with the railroad for the timber on the right-of-way and it is likely that Gould worked for him cutting down the virgin pine trees for lumber and cross ties. According to Jean Taylor’s oral history, The Villages of South Dade, Gould was the foreman of a tie-cutting crew. There is no mention of Gould in the Miami Metropolis from late December, 1903 until July of 1905, when there was a note that L. B. Gould and his wife had granted the F.E.C. Railway a “right-of-way across [his] property for extension purposes for $1.00.” It is likely that during this time, Gould was busy supervising a crew of African-Americans along the route of the Cutler Extension, as it was called, who were cutting down pine trees for Charles T. McCrimmon’s sawmill.

On February 23, 1906, Sam C. Lawrence filed an “ejectment” lawsuit against Mary Brickell, W. B. Brickell and L. B. Gould. This was probably related to Gould’s property in Cocoanut Grove. On April 27, 1906, “Lyman G. (sic) Gould et ux” apparently sold lot 4, block 58 in the City of Miami to E. W. Stephens. He was getting ready to move, it seems, for the next mention of him is a note to the editor of the Miami Metropolis from him in Phoenix, Arizona on July 1, 1906.

He probably timbered his homestead claim and then got ready to move because his claim was cancelled by the “R. R.” on April 23, 1906 and picked up by Frank J. Sanford on July 9, 1906.

Having made his money in Dade County, like so many other early “homesteaders,” Gould moved to the bustling town of Phoenix, where he and his wife got into the real estate business. On April 22, 1909, he registered to vote in Maricopa County, Arizona. From 1914 until 1916, the Phoenix City Directory shows them living at 312 N. 1st Avenue, where he was in real estate and his wife, S. Katherine, was a dressmaker, an occupation she had followed in Miami.

Lyman and his wife divorced while they were in Arizona and he came back to Dade County, where he died in on March 4, 1928.4 The informant on his death certificate was Charles Gould, most likely Lyman’s younger brother, born ca. 1869. His former wife stayed behind in Phoenix, where she died on April 6, 1961.

Lyman B. Gould was only in Dade County for eight years and in the Goulds area for perhaps three. He must have been part of a very large lumbering operation to have the railroad go to the expense of building a siding south of Perrine which was known as late as 1909 as Gould’s Siding. Gould was a very typical early pioneer who came here to make his fortune by exploiting the abundant natural resources of this area and then decamped for greener pastures in Arizona. In a future post, following up on my previous post, I’ll tell the story of Bailes Road.
______________________________________________________________