It is often noted that history is told by the victors. Those who don’t tell their stories are forgotten but those who do assume out-sized importance in the historical record. Such is the case with Edward Stiling, who, in the published histories of Detroit (now known as Florida City), overshadows many others, like Lafe Ishmael, the Shields brothers, Elbert H. Ring, A. C. Graw and James Powers, who also contributed greatly to the establishment of the town. 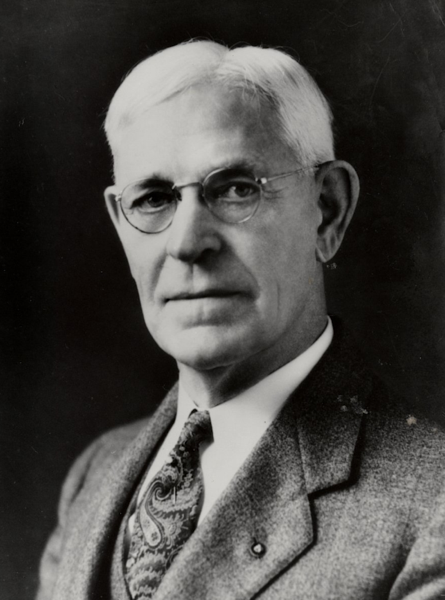 Edward’s parents were Edward Chambers Stiling and Sarah Ackland Ellis. Edward C. Stiling, Edward’s father, was born on July 26, 1828 in Broadhembury, Devon, England. In 1851, Edward and his wife, Sarah Ackland Ellis, lived on a 52 acre farm in Broadhembury. By 1858, they had three children: Grace E., born ca. 1854; Georgina, born ca. 1856 and William, born in September of 1858. In August of 1859, the family emigrated to Canada, where they were enumerated in the 1861 census as living in Normanby, Ontario. Edward was born there on October 18, 1860. Edward’s father found work as a butcher there but didn’t stay in Normanby long, moving to Mt. Forest, Ontario, a small town 230 miles northeast of Ann Arbor, Michigan. In December of 1862, the family moved again, this time to Ann Arbor, where Edward’s father was a baker.1 If he owned his own shop, no evidence has surfaced of that. Edward’s father died in obscurity on October 25, 1888 in Detroit and his mother, Sarah, died on May 18, 1900, also in Detroit. Nothing further is known about either of Edward’s parents.

Edward attended the public schools in Ann Arbor until 1876, when he was 16. The family then moved to Detroit. A short biography of Edward, published in 1914 in the Homestead Enterprise, stated that he entered “a prominent business college” in Detroit, where he took “a thorough course in bookkeeping, commercial law and kindred subjects,” graduating after three years in 1879.2 That school was likely the Bryant & Stratton College, which was located at the corner of E. Larned St. and Woodward Avenue in downtown Detroit. In October of 1881, Edward went to Texas and then moved to Sanford, Florida in 1882,3 where he accepted a position as bookkeeper for the firm of Tuxbury & Fernald.4

Sanford, a planned community, was founded by Henry S. Sanford, a wealthy diplomat from Woodbury, Connecticut in 1870, when he purchased over 18,000 acres from Joseph Finegan, who had served as a brigadier general for the Confederacy. The town was incorporated in 1877 with a population of 1005 and by 1880, the South Florida Railroad had connected Sanford with Tampa.6 At about the same time, Charles H. Tuxbury, a wealthy lumber dealer from Saco, Maine and John C. Fernald, a retail grocer in Saco, established the firm of Tuxbury & Fernald, a hardware store, in Sanford. 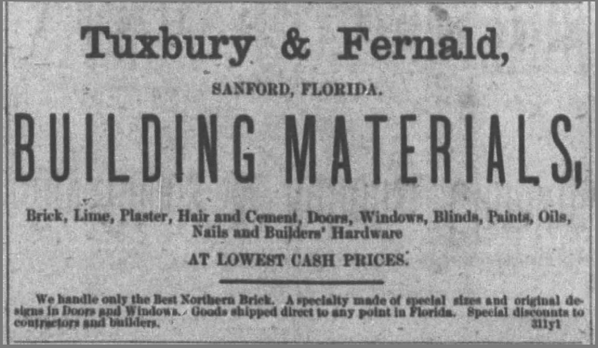 Like most business districts of that era in Florida, the buildings in downtown Sanford were constructed of wood. On September 27, 1887, a fire that started in a bakery destroyed much of the downtown area.9 After the fire, there was no further mention of Tuxbury & Fernald in the newspapers so it is likely that the building burned down and the owners did not rebuild.

Alfred G. Prentiss, another retail grocer in Saco and a friend of the Fernald family, spent his winters in Sanford and brought along his family, including his daughter Emily. Edward and Emily fell in love and were married in Saco, Maine on November 15, 1887. They returned to Florida, settling in Cocoa, where Edward had partnered with Alfred A. Taylor to buy out George H. Fernald, who had opened a branch office of Tuxbury & Fernald on Delannoy Avenue. They renamed the business Stiling & Taylor. In 1889, Emily became pregnant and went back to her parents’ home, at 27 Thornton Ave. in Saco, where she gave birth to her only child, Octavia Rosaleen, on November 5, 1889.10 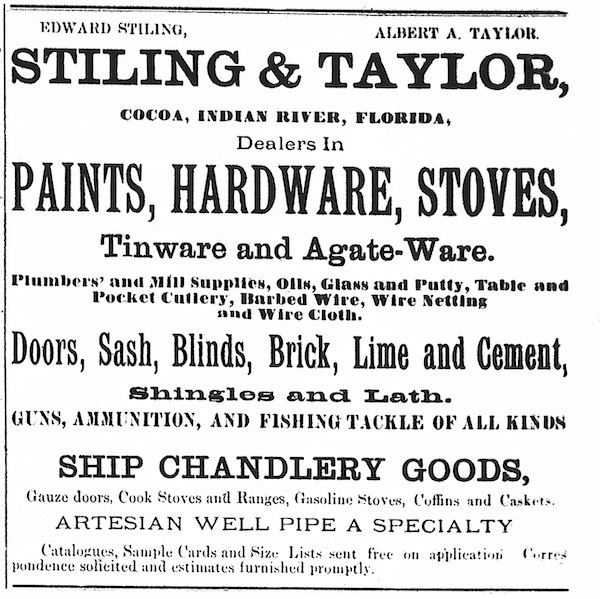 On September 2, 1890, much of downtown Cocoa, built out of wood like Sanford, was destroyed in a fire.12 Shortly after the fire, which heavily damaged or destroyed his properties, Edward “purchased the Julius King store lot” and rebuilt his “business house and residence on a larger scale than at first contemplated.”13 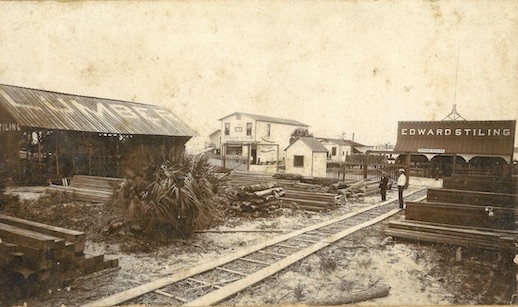 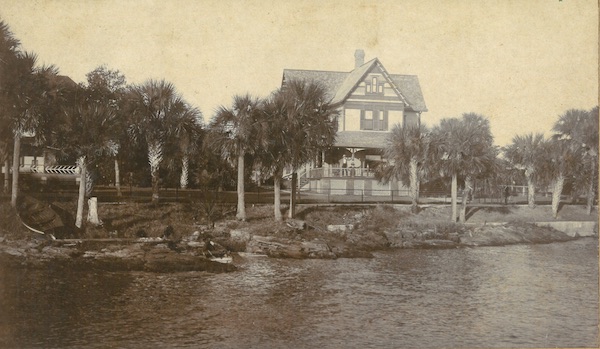 Edward’s business, which included supplying shipping crates to citrus growers, likely grew slowly, as the Jacksonville, St. Augustine and Indian River Railway, owned by Henry Flagler, did not reach Cocoa until 1893. With regular freight service to the rest of the country, Stiling’s business grew substantially. A little over a year later, though, the Great Freeze of 1894-1895 crippled the citrus industry and the economic impact was severe. Stiling’s business was hit hard. Then, on September 20, 1897, a hurricane struck Cocoa and blew the roof off Stiling’s “new brick warehouse.”14 After suffering three substantial losses in seven years, Stiling left Cocoa and moved to East McKeesport, Pennsylvania. There, he got into the real estate business and, in November of 1898, placed an advertisement in the Pittsburgh Daily Post, offering his house in Cocoa for sale.

Stiling Lists His House For Sale15

In 1900, he was briefly investigated by a Grand Jury and fended off a lawsuit filed by Mrs. Margie Gaertner.16 Stiling was active in East McKeesport until at least the spring of 1901, when the Keystone State Building and Loan Association filed a legal action against him over a mortgage.17 Stiling was listed as a broker and retailer on the Mercantile Appraiser’s List for East McKeesport at this time.18 He was unsuccessful in selling his house in Cocoa and in December of 1902, he leased it to Mr. and Mrs. Steele, who were from Canada, for the winter season.19

Once his legal troubles had been resolved in East McKeesport, Stiling went back to Detroit, where he was listed in the 1903 Detroit City directory as living at 168 Lincoln Ave. He was hired by the Boydell Bros. White Lead and Paint Co. as a traveling salesman. The Boydell firm was one of the largest paint manufacturers in the Midwest at the time, occupying an eight-story building in downtown Detroit. It is not known how many places Edward went on his sales calls but one place he did go to was to Miami, where he registered at the Biscayne hotel on November 21, 1904.20 It was his first visit and he was “so favorably impressed” that he may have made some real estate investments.21

Since Stiling had spent nearly 20 years in Florida and because he had also been a real estate salesman, he certainly paid attention to investment opportunities. The Everglade Land Sales Co., which was a national firm, placed an advertisement in the Detroit Free Press on December 19, 1909 that read:

WANTED – High class salesmen: general agent for every county and local representative for every town; capable of earning $5,000 to $15,000 per year to sell Florida Everglade land now being drained by the state of Florida under U. S. government supervision; world’s largest reclamation project; millions of dollars being invested; 9,200 farms already sold this year; most fertile and productive soil in America; worth over $6 per ton as fertilizer; produces $300 to $450 per acre yearly; price only $30 per acre, sold on terms of $1 down and $1 per acre per month; only tropical section of the U.S. mainland; liberal proposition to right men; write for further particulars; only reliable hustlers need apply. Address EVERGLADE LAND SALES CO., 1219 Majestic Bldg., Chicago.

It is uncertain when the Everglade Land Sales Co. was organized, but Henry G. Ralston, who was born in Chicago in 1884, became associated with the company in July of 1909 and moved to Miami in October. He was a first vice-president and a member of the Board of Directors of the company and later was a principal in the firm of Ralston Brothers, Inc., a prominent Miami real estate development company.22 His father, Robert W. Ralston, platted the Pinehurst Addition to Homestead in November of 1912. That property, the NW 1/4 of the SE 1/4 of 13-57-38, was claimed by four men, one of whom was George B. Romfh, Jr., son of a Miami banker, before being proved up by Leonard S. Mowry in September of 1911.

The Everglade Land Sales Co. advertised in newspapers all over the Eastern United States and their advertisements in Detroit caught the eye of Edward Stiling. Early in 1910, Stiling, two friends from Detroit, John Kay and Dr. T. W. Shields, and Theo Ivens of Sioux City, Iowa, came to Miami to investigate the claims of the company. They left, suitably impressed, and the Miami Metropolis stated that they would be back in the fall to locate.23 Stiling must have connected with the Tatum Bros. Real Estate & Development Co. while he was in Miami because well before the fall, on August 6, Stiling sent a telegram to his friend, Dr. T. W. Shields, telling him that the name of the town the Tatum Bros. were promoting was Detroit. He wrote Shields that he had “another choice section” and he hoped to “sell it all in a month.”24 On August 31, 1910, Stiling purchased six 10-acre tracts and on September 1, he purchased seven more from the Tatums. His total outlay for these purchases was $4,680, equivalent to $130,000 in 2019 dollars.25

On August 31, the Detroit Times printed a note that said that “[a] number of residents of the northwestern part of this city, near Grand River and Hudson aves., have become interested in the fertile reclaimed everglades of Florida and have invested in from 10 to 50 acres each in a tract of land that has just been opened up near Miami and which they propose to make into a town, christening it Detroit.” Edward Stiling, of 168 Lincoln Avenue, was “one of those most deeply interested in the new city but others, “including Dr. T. W. Shields, A. R. Cunningham, John Duncan, T. T. Pomeroy and John A. Kay” were also interested.26

Edward may have escorted the new arrivals to Detroit, Florida – he may be the man standing on the corner of the platform – as the Detroit Free Press reported on June 4, 1911 that Stiling had “returned from a seven months’ sojourn in Florida.”27 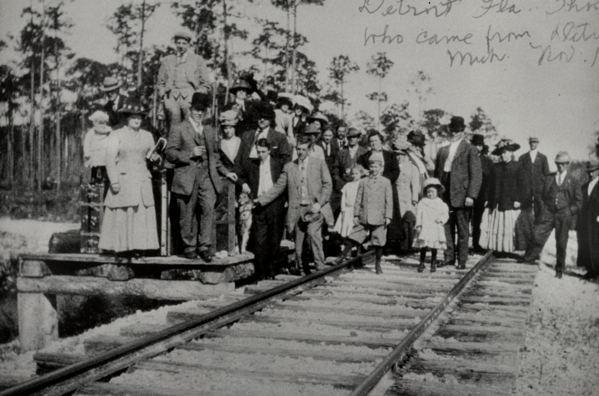 The first families arrive in Detroit on October 29, 1910
Courtesy of the Florida Pioneer Museum

From June 23 until October 23, 1911, he placed an advertisement almost every week in the Detroit Free Press promoting Detroit for the Miami Land & Development Co. How many buyers he was responsible for is unknown but he did not establish a residence in Dade County until at least 1911. He had a real estate office in Detroit, at 692 Trumbull, where he solicited buyers and he traveled back and forth between the two Detroits for several years. In April of 1912, he was listed as a vestryman for the Trinity Episcopal Church in Detroit, Michigan28 and in January of 1914, there was a note in the Miami Herald that he had returned to Detroit, Florida after an absence of six months.29

Stiling went on to play an important role in the establishment of Florida City. Appointed briefly as Detroit’s first postmaster on December 13, 1910, he served in that capacity until June 10, 1911, when Marion L. Williams took over. This short stint as postmaster ended with Stiling’s departure for Detroit, Michigan in early June.30 He was appointed to serve the balance of the term of Florida City’s first mayor, Dr. Benjamin F. Forrest, in late 1916 and then was elected for a full term as Mayor in 1918. He served on the Town Council twice and was elected Mayor again in 1938. Active in civic affairs in both Florida City and Homestead, he was also a leading real estate salesman whose office was on the southwest corner of S.W. 3rd Avenue and Palm Drive. As a representative of the Miami Land & Development Co., he promoted Florida City relentlessly and was richly rewarded as a result. When he died in 1945, the pallbearers included Henry Brooker, Jr. and Clarence J. Parman, a well-known architect in Homestead and a business partner of Stiling’s daughter’s husband, Lee Lehman. Stiling and his wife are buried in the mausoleum at Miami’s Woodlawn Cemetery.
______________________________________________________________________