While browsing old newspapers on various topics related to early Florida City history, I’ve come across the name E.H. Ring on a couple of occasions. Maybe it is people who go by their initials who intrigue me or something else – I don’t know. But I wondered who this man was. When I happened across his name on an early plat in Florida City, I got even more curious because the plat showed that E. H. Ring and his wife lived in Grayson County, Virginia. 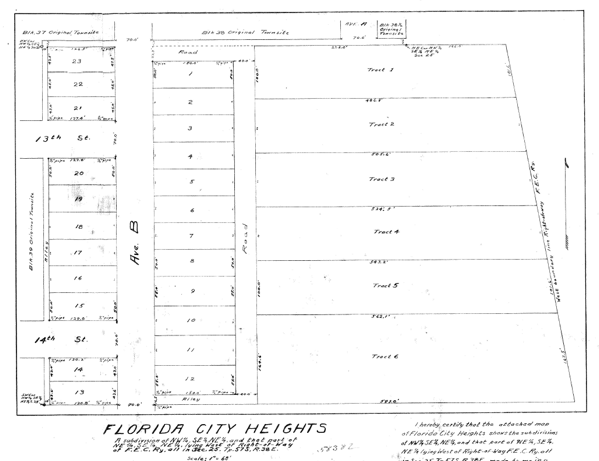 E. H. Ring’s full name was Elbert Holmes Ring – no wonder he liked to go by his initials! He was born on November 12, 1867, most likely in Grayson County, Virginia because that is where he, his wife and his daughter are buried, in the Summerfield United Methodist Church Cemetery.

Before 1900, at the age 0f 33, he had made his way all the way across the continent to Malheur County, Oregon1, where he lived in Bully Precinct, with his wife, Mamie D. Querollo.2 Mamie was a niece of Katy Prato. Katy’s maiden name was Fopianno and she was the head of household 97.

Mamie D. Querollo was born in 1878 in Beaver Dam township, Butler County, Missouri. Butler County is in southeast Missouri and borders the Mississippi River. Her father, Augustine, was from France and her mother, Maria Fopianno, was Italian.3 She married Elbert H. Ring on February 7, 1897 in Malheur County, Oregon4 and their daughter, Julia, was born on March 21, 1897. Mamie died of complications of childbirth on July 20, 1904.5 In the 1900 census of Malheur County, Charles Becker and his wife, Marie were in household 94 and Elbert and Mamie Ring were in household 97.

Elbert went back to Virginia and married Cora V. Thomas on September 12, 1906 in Grayson County6 and then went back to Malheur County, Oregon, where, on April 28, 1910, he was enumerated as an employee of Charles Becker.

Charles Becker (not the same Charles Becker who lived in Oregon) and his wife Mattie were early residents of Florida City, settling there four years after the Rings. Jean Taylor, in her book, The Villages of South Dade wrote that in his early life, Charles “ran a cattle ranch in North Dakota and Montana.” That is true – the 1930 census shows his son Lawrence as being born in 1897 in Montana and his son Charles H. as being born in North Dakota in 1902.7 Was Charles Becker in Oregon related to the Charles Becker who had lived in Wyoming, Montana, North Dakota, Canada and California before ending up in Detroit, Florida? Possibly but proving that as true would be difficult, if not impossible. The future Detroit, Florida, Beckers were in Lemon Grove Township, San Diego County, California in June of 1910.8 Charles had lived in San Diego County since 1898 and was a fruit grower. He had looked at property in South America, Panama and in many places in Florida before selecting property in Detroit after making three visits there, the last in early May of 1914, when he purchased 160 acres in Detroit.9

The first mention of Elbert H. Ring in Detroit, Florida appeared in The Daily Metropolis on December 27, 1910 when the newspaper reported that “Mr. E. H. Ring has had a saw mill in operation for several weeks and lumber is being made as fast as possible for building purposes.”10 This was very shortly after the first pioneers arrived from Detroit, Michigan on a Florida East Coast Railway train just two months earlier.

In addition to operating a sawmill, Ring was an election inspector for an election held in Detroit in the spring of 1912.11 Mabel Delp Ring, E. H. and Cora’s daughter, was born on February 12, 1913 in Detroit, Dade County, Florida.12

Elbert’s brother-in-law, Edgar Thomas, moved to Detroit from Grayson County, Virginia, probably in early 1911. He and James Tanner laid the keel for a 20-passenger boat to ply the waters of the central canal in November of 1911.13 He and Elbert made a trip to Lake Okeechobee in the boat, named the Virginia, a year later.14 Ed used the boat to take people on rides down the newly completed Detroit canal15 to the bay.16 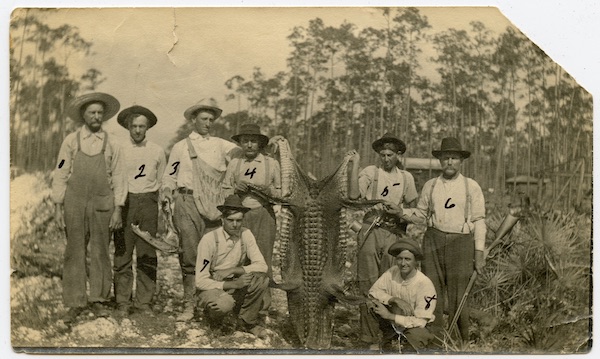 In this photograph, Ed Thomas is part of a group of men who showed off the skin of an alligator that they had killed. The men standing in the back row are, from left to right, John W. Hunt, one of James B. Brown’s sons, Ed Thomas, James B. Brown, Mr. Schultz and William Watson. Sitting in the front row are an unidentified man on the left and Ernest Thomas, Ed’s older brother.

James Benjamin Brown was another early pioneer in Detroit who owned a sawmill. He came to Detroit from Tennessee.

Ring was also an inspector for the F.E.C. Railway and was mentioned in the newspaper in May of 1912 as being in Miami, where he was making his “regular rounds.”17 In early April of 1913, his wife left for their old home in Virginia to spend the summer, taking their newly born daughter, Mabel, with her.18 19 Two months later, while Elbert was in Virginia on a “short trip,” their house in Detroit burned to the ground.20

The loss of his house may have been what caused Ring to stay in Virginia, for he does not appear in any local newspaper accounts after his house burned down. He had purchased land adjacent to Detroit from the Miami Land & Development Company, and on September 25, 1915, he caused the plat of Florida City Heights to be recorded in Book 3, page 211 of the records of Miami-Dade County. At that time, he and his wife lived in Grayson County, Virginia. Lots in his subdivision apparently did not sell, because Ring appeared on a delinquent tax list in 1918, owing a total of $24.49 for lots 1 – 23.21 He was enumerated in the 1920 and 1930 censuses of Grayson County. Elbert H. Ring died in Grayson County on October 19, 1937.

It seems that Elbert H. Ring lived an adventurous life. He grew up in the wooded Appalachian foothills, worked on a cattle ranch in Oregon for 13 years and then moved to the new town of Detroit, Florida in 1910, where he and his wife were active in civic affairs and business. He then moved back to Virginia, his ventures in Detroit not being particularly successful. I’ve written this post partially out of curiosity about who E. H. Ring was and partially because I’m trying to explain why so very few people know anything about the history of this area. They move away, that’s why. Did E. H. Ring feel any connection to this area? No, not at all – he only lived here for perhaps two and a half years. How many of his descendants know that he was in Florida? Very few, if any, I’d wager. So it is for so many people who have floated through this area ever since it was opened for settlement by the construction of Flagler’s railroad. History can’t be told without connections and very few people who now live here have any connection to this area.