William C. Norwood, an early merchant in Detroit, is only briefly mentioned in the histories of this area, which repeat the familiar tales about Wm. Anderson’s general store in Silver Palm, which was not the only store in South Dade. George S. Fletcher and Atka Harper both had stores in Silver Palm before Anderson and J. U. Free had one in Homestead before the Homestead Mercantile Co. was established. William H. Cauley had two stores – one in Goulds and another in Princeton. Charles R. Graham had a store in Black Point and Joseph M. Cormack and William C. Norwood had stores in Detroit. General stores existed wherever there was money to be made. Norwood, a smart businessman, took advantage of that opportunity with the help of his uncle, Thomas A. Feaster.

William Chaudoin Norwood was born in LaGrange, Brevard County, Florida on January 5, 1881 to William Shackleford Norwood and Mary Emma Feaster. William S. Norwood had been born in Perry, Houston County, Georgia in 1846 and his wife was from Feasterville, in Union County, South Carolina. She was a sister of Thomas Andrew Feaster (1858 – 1944) and a cousin of Jerome T. Feaster, the husband of Addie Lee King, who was a daughter of William A. King, who lived in Homestead.

In 1900, William S. and Emma F. Norwood were enumerated in Titusville, Brevard County, Florida. They were pioneers in that area, having arrived before 1871, when their first daughter, Lena, was born.1 Their son William was the seventh of fifteen children. 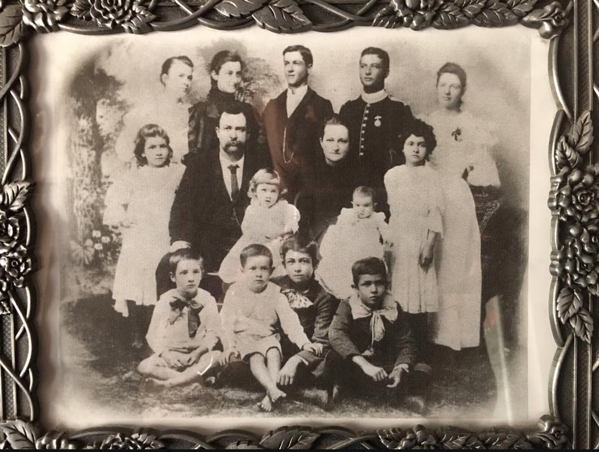 By 1900, Thomas A. Feaster, William’s uncle, was in the retail meat market business, being the manager of the City Market in West Palm Beach.2 His cousin, Jerome T. Feaster, was in business with K. B. Raulerson in West Palm Beach. Raulerson, who founded the East Coast Cattle Company in 1896, supplied nearly all the beef consumed on the East Coast from New Smyrna down to Key West.3 William C. Norwood and his uncle, Thomas A. Feaster, were qualified electors in District No. 3 in St. Lucie County in 1904.4 In 1905, T. A. Feaster became the sole owner of the City Market.5

William C. Norwood, Feaster’s nephew, held “an important position” with his uncle when he married Martha Caroline Cox on September 10, 1905 in West Palm Beach.6 She was born on September 10, 1887 in Orlando,7 the daughter of Peter C. Cox. Their first daughter, Carolyn, was born on August 22, 1906 in West Palm Beach.8 Their second daughter, Martha, was born in late January, 1913 in Detroit.9

In May of 1906, Feaster purchased the Miami Meat Market from A. B. Doane10 and in 1907, he decided to concentrate on his business in Miami and sold the City Market in West Palm Beach to the Faber Bros.11 The Faber Bros. were Albert and William E. Faber, brothers of George B. Faber, who was the husband of Bertha King, another daughter of William A. King of Homestead.

Because Feaster was kin to William A. King (his cousin Jerome T. was married to King’s daughter), he was well-aware of the business opportunities in the Redland District. From the time Feaster purchased the Miami Meat Market, he placed an advertisement in every edition of the Miami Metropolis until mid-July 1912, when he apparently decided to devote his time to farming.

Virgil M. Grennell, an early pioneer in South Dade, had come from Philadelphia and purchased the homestead claim of John W. Jones on Avocado Drive at Richard Road in late 1906. He soon became friends with Feaster and visited him in Miami in 1907. 12 In 1909 Feaster, his cousin Jerome T. and Grennell purchased 280 acres of land in the Redland District from Gus Mayo and Berry Sullivan13 and started advertising the sale of Redland property, along with his advertisements for his business in Miami. Their property was just west of that belonging to Grennell. 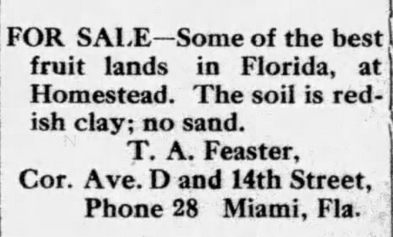 He also sold “six acres and a house to Mrs. P. C. Cox of Palm Beach,” his nephew William’s mother-in-law.14 The 1910 census of Homestead shows that Leonard S. Mowry and Isaac L. Smith were her close neighbors, so her property was likely just west of Krome near Mowry St. Norwood was also enumerated in the 1910 census of Homestead, with his close neighbors being William D. Horne and Dr. Edward L. Brooks so he, too, lived in what is now downtown Homestead. 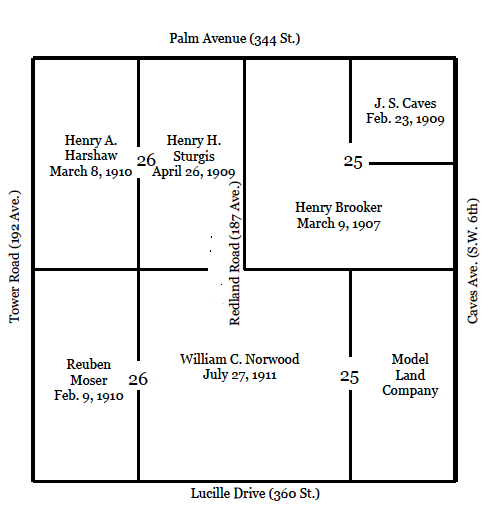 William got to work, building a house on his property while living with his in-laws. The Coxes did not stay in Homestead very long because shortly after William filed his claim, his wife went to Miami to visit her mother.16 In September, William moved into his new house and his wife went to Miami again to visit her parents.17 Norwood and his family didn’t live for very long in the house on his claim, either – he moved into Detroit in early August of 1912.18

Norwood paid cash for his claim on August 22, 1912,19 likely because he was more interested in business than in fulfilling the requirements for the claim. His cousin, Thomas A. Feaster, had left his business in Miami and was settling into the life of a farmer in Homestead. In May of 1912, he and his partner Virgil Grennell sold the 160 acres that they had purchased from Gus Mayo in 1909 to Henry L. Cook and W. A. Glass for $4,400, a hefty profit. He probably invested some of those profits in his nephew’s new store in Detroit.20

Shortly after Detroit was established in 1910, two stores were established to serve the new arrivals. Joseph M. Cormack, opened his store soon after purchasing two business lots in Detroit in November of 1910.21 Otis A. Hardin,22who opened the other store, was a civil engineer23 who worked for the Tatum Bros.24 in their efforts to settle new arrivals on their land. Otis’ brother, William H., was the foreman of the dredge which excavated the Florida City Canal, starting in the spring of 1911.25 Hardin only owned the store for a couple of months, selling it to J. B. VanHorn and M. L. Williams, of Missouri, in February.26 In November, Edward F. Brooker, a brother of Henry, and Lee Lehman purchased the store from J. B. Van Horn. Van Horn, not liking store-keeping, went to work for the Miami Engineering Construction Co.27 Brooker & Lehman didn’t stay long, either, selling out to William C. Norwood in August of 1912.28 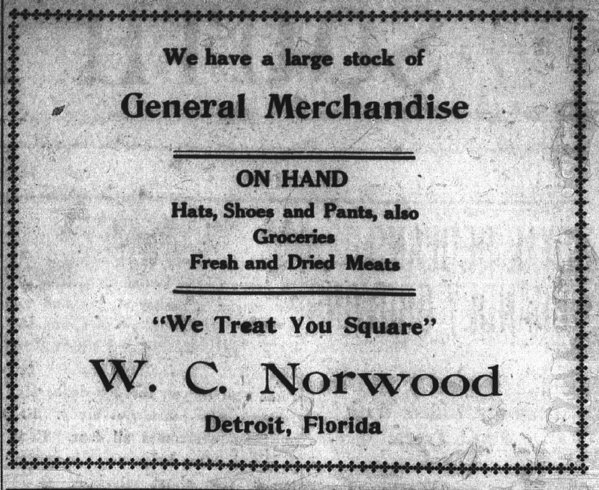 Norwood’s first store was located on the west side of the railroad tracks on the south side of Palm Avenue in the building that housed the Post Office. Edward Stiling, who was the first postmaster of Detroit, erected the building and served as postmaster from December 13, 1910 to June 9, 1911. Marion L. Williams, who, with J. B. Van Horn, had purchased the store in which the post office was located in February of 1911, served from June 10, 1911 to April 7, 1914. 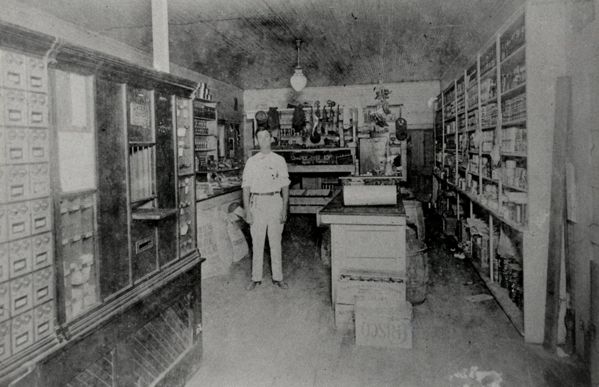 William Norwood in his store. Note the postal boxes on the left.
Courtesy of the Florida Pioneer Museum
This photograph was taken before the summer of 1913, when he moved into his new store in the front of his warehouse.29

Shortly after purchasing the store from Brooker & Lehman, Norwood bought a “business lot of Edward Stiling” located “on the corner of Avenue A and Palme (sic) avenue.”30 According to the Miami Metropolis, he put up a warehouse across the street from his store.31 At the time he built the warehouse, he planned to build a store in front of it32 and he did so in July of 1913.33 Building a house and purchasing his homestead, followed by a move into Detroit, where he purchased a business and then erected a warehouse was a significant financial commitment and one that he was no doubt assisted in by his uncle, Thomas A. Feaster. 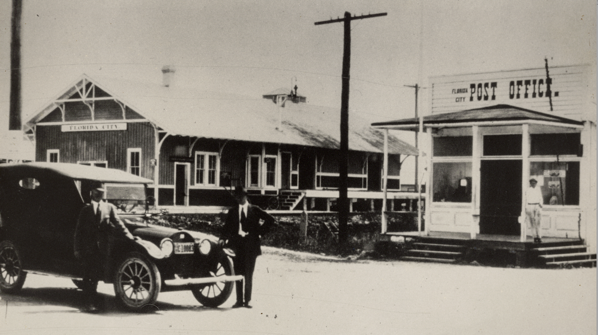 This photograph was taken sometime before February 22, 1924, when the building caught fire.34 35

Norwood needed the warehouse to hold the grain, hay, fertilizer and dry goods he sold to an ever-increasing population, just like J. U. Free in Homestead. He became a stockholder in the Detroit Ice, Light & Power Co.,36 added a soda fountain to his store and sold Seybold’s ice cream.37 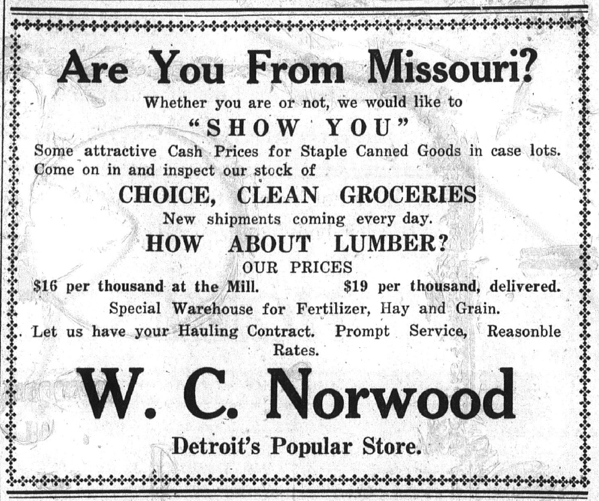 South Florida Banner, January 24, 1913, p. 4
He helped organize the Detroit Growers Association38 and partnered as a commission merchant with Jesse H. Simmons, who owned a packing house on the Terminal Basin.39 40 His uncle, one of the biggest shippers, hauled over 11,000 crates of tomatoes to the packing houses, harvested from 18 acres of “rich marl prairie” more than 10 miles southwest of Detroit.41 Norwood had packers “working night and day to keep up with the crates of tomatoes that are pouring in daily.”42 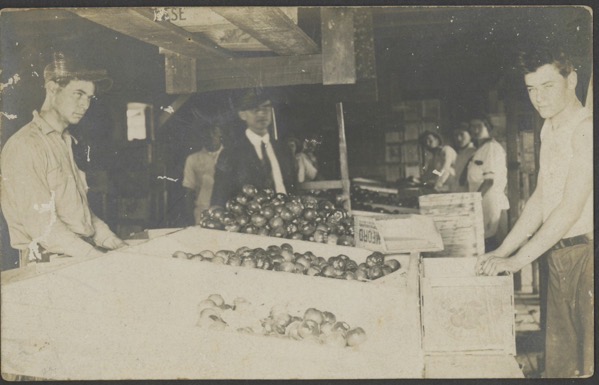 A. B. Saunders, who had the contract to deepen the Detroit canal, engaged Norwood in 1913 to bring 500 cords of wood, with 20 cords delivered each week, to fuel the dredges doing the excavation work.43

During the summer of 1914, Norwood and his family, who were living in the Tatum Building in Detroit, moved back to his homestead.44 In 1915, he established the Florida City Dairy on 100 acres of land between his homestead and what is now Krome Avenue.45 The dairy was located on the land now occupied by the Gateway Estates mobile home park.46

In March of 1918, Norwood was elected to the Town Council of the Town of Florida City.47 In August, Norwood was reported to be ill but to have recovered under the care of Dr. Robert R. Teller.48 It is likely that Dr. Teller was Norwood’s physician because he came from the same town in Arkansas that Joseph L. Ishmael, who had been employed by Norwood,49 came from. Dr. Teller, unlike Dr. John B. Tower in Homestead, had a controversial past. He had been sued several times in Arkansas City, Kansas for non-medical matters and after he settled in Goulds, he was criticized as being a ‘quack’ by the Dade County Medical Society.50 He had his defenders, of course, who refused to believe what the medical profession had to say.51

William C. Norwood died on May 10, 1919, of “dilatation of the heart.”52 Whether his doctor, Robert Teller, was a quack or not would likely not have made any difference, as heart disease seemed to have affected men in the Norwood family. His brother, Burnham Andrew, died of heart failure at the age of 39, the same age William was when he died. Their father, William S. Norwood, died at the age of 63 and none of his sons lived to that age. 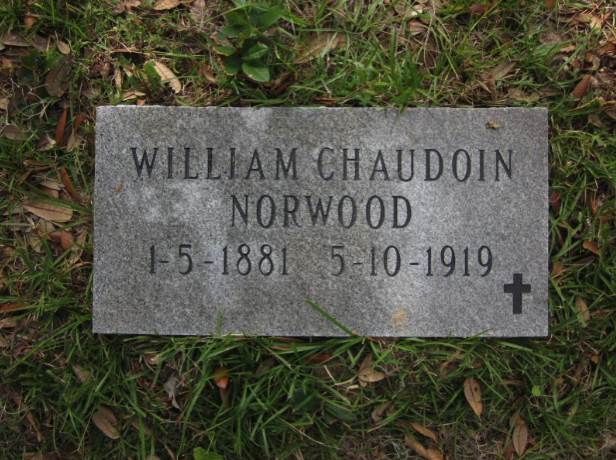 Florida City had two mercantile businesses from 1910 – 1922: William Norwood and Joseph Cormack. There was also a furniture store, the Model Furniture Co. (1914-1916), and the Palm Avenue Pharmacy (1914-1918). Neither of the mercantile businesses survived their founders: Norwood died in 1919 and Cormack in 1923. The Model Furniture Co. moved to Miami and the Palm Avenue Pharmacy was purchased by Dr. John B. Tower and liquidated.53 As the roads between Florida City and Homestead improved and more automobiles were purchased by residents, the owners of these businesses could not survive the competition from well-established businesses in Homestead.