How often have you driven south on U.S. 1 and seen the sign designating J. D. Redd Park on the right, at the intersection of N. E. 6th Avenue and the highway? Did you ever wonder who he was?

James Daniel Redd was born on November 12, 18831 in Shaw’s Fork, Windsor Township, Aiken County, South Carolina. The 1900 census shows that James’ parents had 10 children, all 10 of whom were still living. In the 1910 census, he was one of seven children shown, so three of those children had left the household. His parents were Mashack C. (1850 – 1918) and Margaret Annabelle Fouts (1853 – 1927) Redd. They were farmers and James was a farm laborer. When Mashack died on February 6, 1918, his wife and one of his sons, Chester M., wasted no time in settling the estate, selling the farm, livestock, household furnishings and all of the implements in an auction that started on March 1.2

The book Florida: The East Coast, published in 1926, stated that Redd had arrived in Dade County in 1906.3 The April 17, 1942 issue of a newspaper entitled Community Review touting J.D. Redd as a candidate for the Dade County Commission also gave that year for his arrival. When J. D. and his brother Chester were in Aiken for his mother’s funeral in 1927, The Journal and Review reported that he had left for Florida “some twenty years ago.”4 In the 1910 census, James appeared as a “telephone lineman,” living on Quarter Boat #5, along with 19 others, in Upper Matecumbe Key in Monroe County.5 Grier Ralston Smiley, who was the husband of Nora Janet Krome, sister of William J. Krome, lived on the same boat.6 He was the Resident Engineer. Grier’s brother-in-law, Philip L. Wilson,7 the husband of Clara, another sister of William Krome, was the Division Engineer and also lived on Quarter Boat #5. J. D. was obviously working on Flagler’s Key West Extension and knew Krome, who had claimed a homestead in South Dade in 1903.

James married Fanny Ethel Nottage, who was born in Key West in 1883. They were married on January 20, 1914 at the Fleitas house at 719 Eaton Street8 when they were both 31 years old. Fanny was a graduate of the Key West Conservatory and “fine performer” on the piano.9 Fanny’s mother was Marian T. Fleitas, who was born in Florida but whose father was from the Bahamas. Marian’s second husband, Francisco Fleitas, was born in Cuba. He was her second husband as she was married to a Nottage first. Fanny E. Nottage is shown as a “step-daughter” in the Fleitas household in the 1910 census of Key West. Marian’s maiden name was Albury, as her mother, Frances Albury, is also shown in the household. In the April 5, 1912 issue of the South Florida Banner, there is a note that says that “Mrs. F. Feleiter, of Key West, is visiting her cousin, Mrs. W. J. Froedell.” The references are to Marian Albury Fleitas and Maisie I. Parks Tweedell, wife of Walter Jackson Tweedell. How James met Fanny is hard to say, but a possibility is that since Fanny was a cousin of Walter Tweedell’s wife (he married Maisie Parks in Key West in 1904), Marian brought her daughter along with her on her frequent visits to Homestead, where she introduced her to James.

In 1927, Marian’s husband, Francisco, sold cigars from a space in the Redd Building. 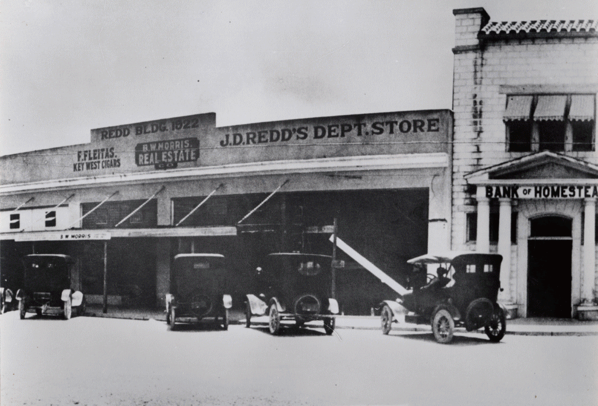 Note the sign for Francisco’s store on the left side of this photograph. He shared space with Benjamin W. Morris, a prominent realtor and developer. Unfortunately, the City of Homestead demolished this entire block in 2017 to make way for Homestead Station, a combination movie theatre and bowling alley with a 7-story parking garage.

In the 1920 census of Homestead, Fanny’s parents were living in the Redd household. Francisco was 71 and Marian T. was also 71. Francisco had been born in Cuba in 1859 and was a naturalized citizen of the United States, being naturalized on May 15, 1893. He was active in Cuban politics and was a supporter of Jose Martí.

Fred owned a dry cleaning business at 10 S. Krome Avenue, next to his brother James’ store, The Men’s Shop, at 4 S. Krome. He was born in Windsor, Aiken County, South Carolina and in 1917, according to his draft card, he was an insurance agent for the Metropolitan Life Insurance Company in Charleston, S.C. He was not married at that time. He came to Homestead in 1919 and in the 1920 census, he was single and living in a boarding house operated by James and Henrietta Chambliss. He soon opened his dry cleaning business, which he operated until he died on April 16, 1950. Fred married Othelia Fuchs in 1922 and they were living with her father, Charles T. Fuchs, Sr., in 1930. This was in the depths of the Depression – times were hard.

In 1910, James’ older brother Chester, his brother Martin’s widow Kate Shellhouse and her 9 month old daughter Thelma were living with Chester’s parents in Windsor Township.10 Kate was the daughter of a neighboring farmer, Henry Shellhouse. Kate married John H. Brody in November of 191611 but may have died during the influenza epidemic in 1918. Chester and his wife came to Homestead in 1914 and purchased 20 acres of Hattie Bauer’s homestead.12 In 1920, Chester lived in a rented house with his second wife, Lottie Pearl Barton Redd and their two sons, Coley, 7 and James, 2. Coley was born on January 3, 1913 in Aiken and was the son of Chester and his first wife. James was the son of Chester and Lottie Pearl. Chester was a farmer for most of his life but also speculated in real estate, as so many of his contemporaries did. In 1930, he was living with his family on N.W. 6th St. and his occupation was given as “truck farmer.” In 1945, Chester’s occupation is given as “laborer” and he was living with his wife and two of his children, Marjory and James. Chester died on April 9, 1954. He and his wife are buried at Palms Memorial.

Of the three brothers, James is the best known. He was very active in civic affairs and was elected County Commissioner for a number of terms. Jean Taylor wrote that James D. Redd met John U. Free while working on Flagler’s railroad in the Keys and that when they came back up to Homestead, they became partners in business. From what I’ve learned, all three brothers were of humble origins and they worked hard to achieve what measure of success they obtained. None of them homesteaded land here or got any other breaks from the government. James must have been the most skilled in dealing with other people, as he was a successful politician who was elected to the Homestead City Council in 1913, the year that Homestead was incorporated. He subsequently served on both the City Council and the Dade County Commission. In 1921, Walter Tweedell resigned from the County Commission because of his failing health and Redd was appointed to take his place. Redd was the County Commissioner representing Homestead from 1921 until the fall of 1942, when he lost the election to Preston B. Bird, 13,178 to 16,824. He served continuously except for 1935-36, when he declined to run for re-election due to health issues. He was a member of the Homestead City Council from 1913 until 1935.

Redd was responsible for a large number of accomplishments. He was instrumental in getting James Sottile to donate the land for Bayfront Park and also worked hard to get Card Sound Road opened. He donated the land where James Archer Smith Hospital was built, got the County to clear and scarify the land that is now the park named after him and assisted in getting the municipal swimming pool next to the light plant on N. Flagler built. His list of achievements runs to many pages – a book could be written about him.