In the spring of 2018, Sheldon Cunningham, a grandson of one of the early settlers in Detroit, Florida (the name was changed to Florida City in 1914), contacted me seeking more information about his grandparent’s time here. We had a very productive collaboration that resulted in Sheldon writing and publishing the two booklets below. Sheldon supplied the photographs and the background on his family and I did most of the research, using newspaper articles and a lot of previous information I had gathered on the history of Detroit. I also provided documents to Sheldon that are owned by the Historic Homestead Town Hall Museum and contacted a member of the Shields family who kindly provided information about her family. Both booklets are copyrighted by Sheldon Cunningham. You may not use any of the information or photographs in the booklets without the express written permission of the author. Please contact me, Jeff Blakley, using the Contact tab on this website, for Sheldon’s contact information.

Detroit, in contrast to Homestead, which was platted by the Model Land Company, Flagler’s real estate holding company, was a community that was planned by the Tatum Brothers, one of whom, Bethel B., had come to Miami in 1900. They were relentless in their advertising, which gave many people the impression that Detroit was the closest place to Paradise to be found in Florida. The reality, as you will discover when you read Sheldon’s booklets, was somewhat different. 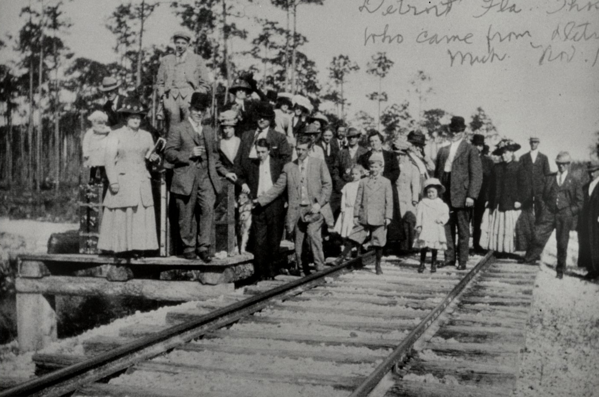 This is a photograph of the first group of settlers, described in the newspaper article below, who arrived in Detroit on October 29, 1910. There was no station at the time, just a platform stop.

The first book, The A. R. Cunningham Family Moving to Florida in 1911 to Grow Tomatoes, is the story of Sheldon’s grandparents and father as a young boy in Detroit. Arthur Cunningham was a pharmacist who, as the article that appeared in The Miami Metropolis below states, had no practical knowledge of farming. The booklet relates the time-line of the Cunningham family adventure and is a very interesting read. The Cunninghams, who arrived in early 1911, were not among the earliest settlers, who arrived in late October of 1910.

The second book, Ella May Cunningham’s Photos of Life in Detroit, Florida in 1911, is a compilation of photographs taken by Sheldon’s grandmother with a Brownie box camera. Sheldon and I worked for quite some time, unearthing the background information about some of the people in the photographs. By providing wider access to this document, I hope that other people interested in early Detroit might be able to make some contributions also.

Both of these short booklets and the addendums to them can be downloaded by clicking on this link: Detroit, Florida in 1911.

From the Miami Metropolis:

FROM DETROIT, MICH., TO DETROIT, FLA., THE FIRST PULLMAN GOES
THROUGH SPECIAL ARRANGEMENT WITH THE RAILROAD COMPANY MIAMI REAL ESTATE FIRM GETS COMMISSION FOR TRAIN TO STOP AT COLONY

“The first through Pullman from Detroit, Mich., to Detroit, Fla., arrived in Miami yesterday morning and today continued to its destination, there having been a special permit granted by the railroad company for it to stop at the new town.

“In the party aboard the car, were twenty-two grown people and eight or ten children, all of whom are to live at Detroit. Yesterday morning, they were met at the Miami station by Mr. B.B. Tatum and entertained most pleasantly all day.

“The forenoon was spent on the beach and in the afternoon five automobiles took the party on a rapid ride over much of the country near Miami and over all parts of the city. This being the first visit to this section for most of the crowd, their expressions of surprise and their many questions were delightful to hear and at the close of the day, Dade county had about thirty more enthusiastic citizens.

“It is the intention of the party, all of whom own land near Detroit and town lots there, to build houses as speedily as possible and most of the ladies will probably return to Miami until the dwellings can be erected.

Already several shacks have been built and next week a saw mill is to be established in the town where lumber may be secured conveniently.

“The plans for their farming enterprises are very interesting. There is probably not a practical farmer in the party, most of the men being members of some profession who have spent most of their lives in city offices. The idea, however, is to farm on communal lines with a superintendent chosen for his knowledge of successful farming in this part of the world who will instruct the new comers in all the many details of South Florida trucking.

“A powerful ditching machine is enroute from the factory, which will be used in the Detroit territory and the planting of an immense tract of land will be begun at once.