In 1918, The Homestead Enterprise published a series of articles authored by pioneers of their reminiscences. There were to be twelve articles but only six were published. The influenza pandemic in the fall of 1918 interrupted the publication of the articles and, as far as I know, the remaining six were never published. I’ve transcribed and published the articles by Lilburn R. Nixon, Charles H. Gossman and Daniel M. Roberts previously. This article, by George Walter Moody, for whom Moody Drive (S. W. 268 St.) was named, was published on October 10, 1918.

“I was born and raised in southeast Georgia1 and moved from that state to Florida in 1882, first settling in Seville2 in St. Lucie county, where I engaged in general merchandise business. Here I remained for thirteen years, and then decided to go to Española3 in St. Johns county, where I followed store keeping for two years. New Smyrna4 was our next home and here we stayed for one year only.

“Miami was our next move and as we had heard considerable about this promising little town, we decided to go there and look the situation over. This was in 1899, only a short time after the railroad5 had been completed to that point. Close inspection satisfied me that the town had a promising future, which was all we could ask for in those days. There were a few stores then, kept by the Sewells, Budge, Brady, Girtman and a few others whose names I do not recollect. But there was nothing in those early days to suggest what has happened in recent years. Few would have dared to predict a development such as we have today. St. Augustine, the oldest city in the United States, was then considered to be about the only place of any consequence on the east coast, south of Jacksonville, and anything below that ancient city was regarded as being beyond the pale of civilization.

“The first thing to do after arriving at our new home was to hunt a job of one kind or another, not the easiest thing to do in the world in a community where dollars were as scarce as hen’s teeth. In those days the store keepers kept everything they could think of and when they had a chance to hire out for a day or two at a time, they did it. But the longer we stayed the more satisfied we were with our choice. The next thing to do was to locate a homestead and then find a job which would keep us while waiting for the country to grow.

“Cutler, about 15 miles south of Miami, looked good to us as a place in which to start a store. If we located there we would be 15 miles nearer the South Dade trade6 than the Miami stores, and while this traffic was comparatively small it was growing, and we had hopes that the store would do a profitable business.

“The ‘road’ from Miami to Cutler passed Old Larkin,7 which was about seven miles from Miami. Trail would be a better word than ‘road.’ From Old Larkin to Cutler was about seven and a half miles. From Cutler to Black Point the journey was by road, trail and prairie – any old way that looked good. Prairies were good when the water was down. When the glades were flooded it was a case of sticking to the rock land, a journey that only the Studebaker and one other make of wagons was able to negotiate. If you want to know how rough it really was, just drive your farm wagon through the pineland in the rockiest section. 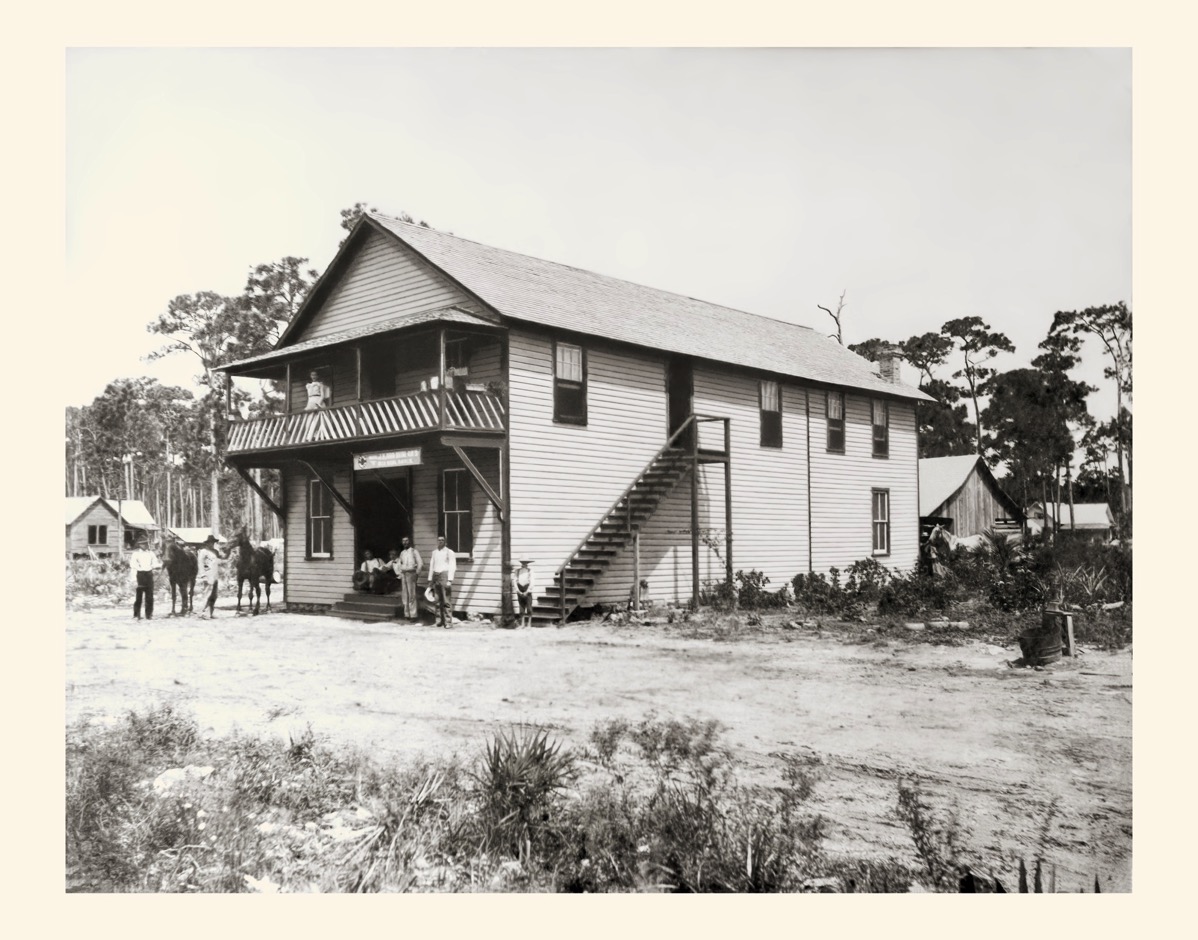 “While building at Cutler, we resided in Miami for three or four months, then moved to our new home. There were eight or ten houses in the Cutler tract at that time. About the same time we located our homestead in the Naranja section8 (at that time there was no one living anywhere near us) and began improvements by setting out a grove or grapefruit and orange trees, and began growing tomatoes on the glade9 land that formed part of our homestead. Subsequently I sold the homestead10 to Major Hugh Gordon11, son of General John B. Gordon, the famous Confederate general. Mr. Cope was also associated with Major Gordon in the purchase of my homestead.

“I kept store for four or five years at Cutler and then moved south to Perrine12 where I built another store. At that time, I was in partnership with D. C. Brown,13 who ran the Cutler store, while I managed the Perrine establishment. Mr. Brown, who is a brother of Postmaster Brown14 of Miami, has been commissioner of Duval county15 for a number of years and is a prominent man in that county.

“In 1903 I built the home on my homestead and lived there until the spring of 1904, when my wife had a paralytic stroke and we were compelled to move to Miami for medical treatment. About seven months later we returned to the homestead and the work of planting a grove and cropping began in earnest. Tomatoes, potatoes and sugar cane were grown successfully, the soil being exceptionally good. At a later date the store at Cutler was combined with the one at Perrine, with Mr. Brown16 in charge.

“While living on my homestead I started the store I now run at Naranja, in 1903.17 The old post office building was the first building in Naranja and my store the second. There has always been considerable activity among the packing houses in this section as it is the center of the grapefruit and tomato growing territory.

“The first packing house built in this section was made of logs and was demolished some time ago. Then came the Citrus Exchange packing house, and the houses run by Chase,18 Hickson,19 A. D. Fogel,20 and Hutton & Hutton.21

“The development of our public schools is quite interesting. First there was the log school house on the corner opposite to where Will Anderson’s store is now. This was taken down and a new school building, a two-story affair,22 put in its place — a community school edifice in which the citizens contributed labor, cash, material and anything else of value, to enable the school to open for business. As a local school this was quite a credit to the community, but when the fine new Farm Life School23 was built, Silver Palm, Redland, Naranja, Princeton and Modello united in a combination school that is considered one of the finest of its type in the country. The trailers employed by the school board to transport the pupils to and from school remove the greatest hardship which the children of the early days had to endure.

“Newcomers always ask questions about the Indians in those early days. Twenty years ago there were plenty of Indians in South Dade but not very many in the Naranja neighborhood. We did a big trade with the Indians at Cutler where they brought their otter furs and coon and alligator hides for barter. In those days many birds of beautiful plumage were shot by the Indians24 and sold to the traders. This was before the law forbidding this trade25 was passed. The Indians were pretty shrewd traders and generally got all that was coming to them. They were equally good neighbors and while we did not see a great many of them near our homestead, those we did see were quite friendly.

“Good roads have done more than anything else to build up South Dade. We who knew the country when the ‘alleged’ roads were merely trails; when the stores were few and far between; when neighbors were scarce and public improvements unknown — we know by experience what pioneer life was. Those who have come since the railroad made its advent26 may know what privations are, but can only imagine what real pioneer life is.

“Yet the singular thing is, all were happy and contented. At one time when we were on our homestead there wasn’t a white man, woman or child in all the territory south of the Perrine grant.27 While Mr. Brinsell,28 the Slavins,29 Mr. Poland30 and Dan Hardie31 had located claims prior to this, all of them had gone elsewhere to find employment. Of course they returned within the legal period, but while they were gone, like Robinson Crusoe, we ‘Were monarchs of all we surveyed.’

“In closing I want to give credit to our community for the peaceful spirit which has existed from the beginning. There has been no unnecessary disputation or litigation. We have been living like one big family, and it is the hope of the writer, that as the years go by, the same friendly spirit shall ever prevail.”