Portions of the history of Goulds have been told but much of it has never been written. Jean Taylor, in her book The Villages of South Dade, probably wrote more than anyone else has about Goulds but she didn’t focus on the settlement of Goulds. Instead, her focus was on the families who lived in the Goulds area. This article will focus on the town and the industry that created it.

There were a few small-scale subsistence farmers in the Goulds area before Flagler’s railroad reached the area in mid-1904, and the arrival of the railroad resulted in a modest increase in the number of homesteads claimed. Before 1904, only 7 homesteads had been claimed. From 1904 until 1909, 10 more had been claimed. Those homesteads were in the pine rockland west of the area that came to be called Goulds and those men cut down the virgin Dade County pines and turned them into railroad ties and lumber for building. The sawmills that produced that lumber were near the railroad but were not in existence long enough to be documented in the historical record. Their products were shipped from Gould’s Siding, which was, by 1911, the location of the Goulds Depot. The Goulds depot was located just north of S.W. 224th St. on the east side of the railroad tracks. 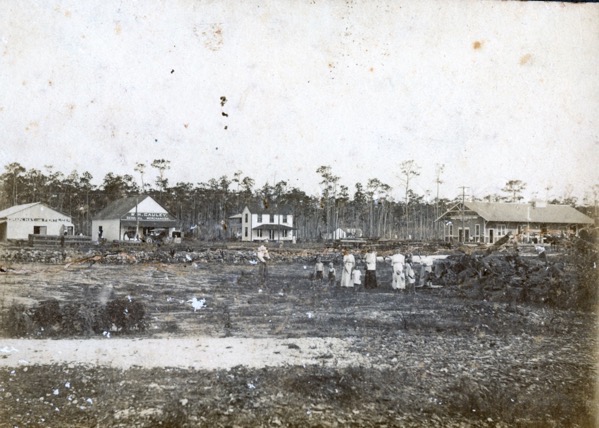 From left to right: Cauley’s warehouse, store, hotel and the F.E.C. Railroad depot.
Photograph courtesy of the Florida Pioneer Museum

Most of the land east of the railroad tracks, which is now the busway running parallel to U.S. 1, was subject to flooding and not eligible to be homesteaded. Those low-lying lands, called the “front prairie” by William J. Krome when he did his survey for Flagler in 1902-1903, were granted to the Model Land Co., Flagler’s real estate holding company. Wealthy and politically-connected men like John H. Ehrehart, Dr. William S. Burkhart and John C. Baile purchased much of this land and started farming operations on it shortly after the arrival of the railroad. Thomas J. Peters, who had farmed the Cutler prairie as early as 1898, showed how profitable tomato farming could be and others, hoping to become rich, tried to follow his example.

Farmers came to Goulds for the winter farming season from all over the United States. Willard S. Stove came from Salt Lake City while Seth W. Brundage, who later owned an awning company in Miami, came from Newkirk, Oklahoma. Through the end of 1911, 42 farmers were mentioned in the Miami Metropolis. They farmed in their home states and came down to Goulds during the winter to continue farming. All of them leased their land (most of them from John C. Baile’s Baile Farm) and farmed small plots of less than 40 acres. Among the largest farmers were William I. Peters, a brother of Thomas J.1; E. R. McClain, William H. Cauley, Edward F. Moffat2 and William H. Owens.3 All of these farmers had over 100 acres in tomatoes. Edward F. Moffat owned 250 acres that weren’t part of the Baile Farm and he leased his land to individual farmers.

Along with the farmers came the labor force needed to harvest and ship the produce: pickers, crate-makers and packers. Goulds was not an enumeration district in the 1910 census but even if it had been, the census was taken in April and May of 1910, after the seasonal farmers had left. Thus, it is not possible to precisely determine how many farmers and laborers were in Goulds during the farming season because almost all of them were migratory. The seasonal labor force was substantial, however. William H. Cauley hired Josiah E. Horne, a brother of William D. Horne, to build his general merchandise store in 19104 and in January of 1911, Cauley opened his hotel, which was run by his future father-in-law, Charles W. Hill.5 A short notice in the February 24, 1911 issue of The Miami Metropolis stated that Mrs. W. I. Dolan of Chicago6 reported that “her equipment was inadequate to feed and care for the enormous crowds. Mrs. Dolan came last winter with her large boarding tent sufficient to feed one hundred people.” In the same article, it was noted that W. H. Cauley “expected 400 pickers and packers” to visit his store “during the height of the season.”7 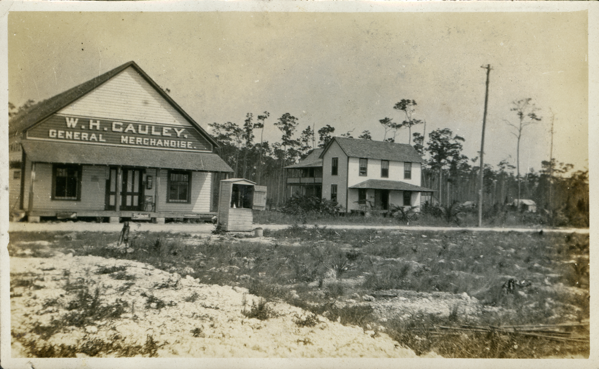 The Baile Farm had a packing house on the East Glade that was connected to the F.E.C. Railway by a narrow gauge tram line. The vegetables were transported to the Goulds platform (the depot was not built until mid-19118) by an automobile converted into a traction engine.

The farmers at Goulds were very productive. By February, 1911, the packing houses were having difficulty shipping the crop because Goulds only had a ten-car siding (a section of track that ran parallel to the main tracks) and they urgently needed more siding tracks.9

At first, the tomato crop shipped from Goulds was just the fruit. Because there was no way to sell the over-ripes and fruit that was otherwise unmarketable, those tomatoes were either left to rot in the field or discarded. That changed in 1910, when Garland L. Miller traveled to Chicago to persuade Joseph N. Grant, of the Grant & Beall Company, to come to Goulds to build a canning plant. Miller had come to Miami in 1909 and worked as a traveling salesman for a book company before getting into the real estate business. He started working for Walter Waldin and later became secretary and treasurer of the Walter Waldin Investment Co.10 Walter was a brother of Bernhard “Barney” Anton Waldin, for whom Waldin Drive (S.W. 280 St.) is named.

Canning fruits and vegetables became commercially viable after the Civil War. Numerous small firms were established nationwide starting in the early 1890s. George S. Beall, born in Ohio in 1859, established himself as a merchant in Columbus, Ohio in 1884 and went on to establish a department store in Minneapolis. He married Madeline Stevenson in 1880.11 Joseph N. Grant, born in Trenton, NJ in 1864, got into the food canning business before 1900, when he was enumerated in the 1900 census as the superintendent of a cannery in San Francisco. He moved around a lot and when his first wife died in 1901,12 he sent his daughter to live with her aunt in Wooster, OH. Meanwhile, he was in Cincinnati, the headquarters of the T. A. Snider Preserve Co.,13 and somehow met and married George S. Beall’s wife’s sister, Kittie, in 1902. George S. Beall died in 1903 and Grant & Beall, Co. was established sometime after that date. While Grant & Beall had an office in Chicago in 1910 at 42 River Street, 14 the company does not seem to have been a major player in the industry. It is unknown how Garland L. Miller knew Joseph Grant but he convinced him to come to Goulds and build a canning factory.

The construction of the canning factory began in early March of 1911 and it was “located between the packing house of J. C. Baile and Chase & Co., along side the motor line leading to Baile Farms and on the right of way of the F. E. C. railroad.”15 J. N. Grant visited the site while the building was being erected and stated that he was building the plant but did not expect to make any money the first year.16 That proved to be true, but some farmers made out very well by selling their crop to the Grant & Beall Co. factory instead of shipping their tomatoes as “fancy” grade. The first season, the plant shipped 9,000 five-gallon cans of tomato pulp to northern markets.17 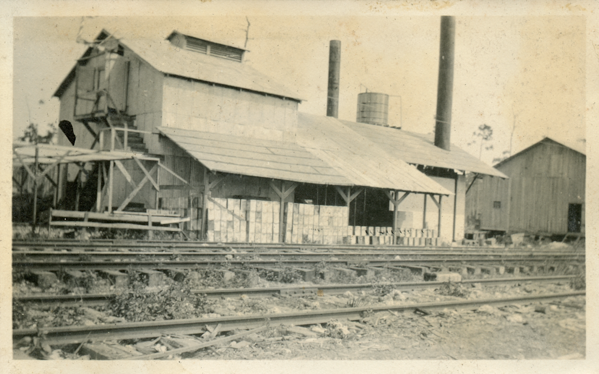 After the 1911 season was over, Grant made a decision to convert the plant from a pulp factory to a catsup factory. This was after learning that about 10% of the pulp was lost due to spoilage, even though it was shipped quickly by the F.E.C. Railway. Onions and spices were added to sauce made from tomatoes brought from as far away as Dania to be processed. The product was shipped out in 50 gallon barrels, 550 of which were at the factory in May of 1912, to buyers like Heinz and Campbell.18

Laban Frazier Lindley, June’s grandfather, was born in Paoli, Indiana in 1887, the son of Dr. Laban Fisher Lindley and his wife, Anna. Later in life, he worked as a pharmacist for Lewis S. Bowles, who owned a retail drug store in Paoli. But before settling down and getting married in 1922, he worked in the Grant & Beall Co. tomato canning plant in Goulds, starting in 1913. He continued working in Goulds every winter for the next five years. His WWI draft card gives his occupation as being the Assistant Superintendent of the Tomato Products Co.’s tomato pulp factory in Goulds, Florida. He was registered by Ben Shepard, Clerk of the Circuit Court for Dade County. The date on the card, June 5, 1917, is in the same handwriting as his precinct, which was N.W. Paoli, Orange, Indiana, so it may be that Laban filled out the card in Dade County and then took it home, where he worked for E. O. Grosvenor,19 who was a manager for the Williams Bros. Company, which owned the tomato canning plant in Paoli.

The Williams Bros. Co., founded in Detroit, Michigan in 1881,20 rented a tomato canning plant in Paoli, Indiana in the summer of 1911 and built their own plant in 1912.21 The company went into bankruptcy in June of 191622and was liquidated by the summer of 191723 so it may be that the Tomato Products Co. purchased the Williams Bros. Company’s assets in Orange County. That plant was very busy: one farmer brought 138 tons of tomatoes, grown on just three acres, to the plant in early October, 1917.24 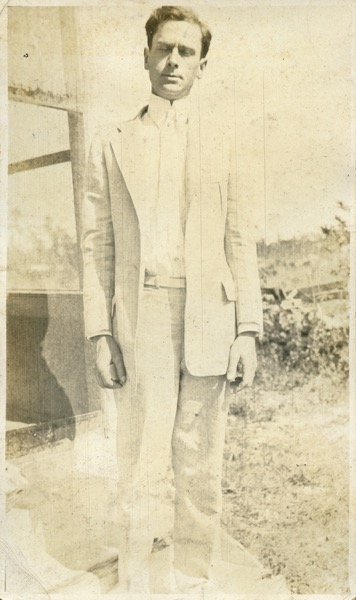 As for Joseph Grant, he apparently transferred the assets of the Grant & Beall Co. to the Kentucky Brokerage Co. in 1915. It was incorporated on March 22, 1915 in Frankfort, KY by his second wife, Henrietta, and his daughter, Elva V. Grant.27

The T. A. Snider Preserve Co., established in 1884 in Cincinnati, Ohio, purchased the Goulds plant in late 1917 or early 1918. This advertisement appeared in The Homestead Enterprise on April 25, 1918: 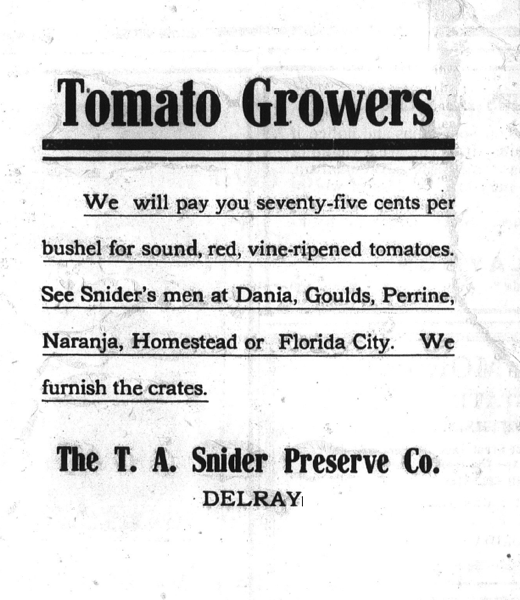 When a hurricane-spawned tornado passed through downtown Goulds in September of 1919, the canning factory was not mentioned as being damaged, even though Chase & Co., which was adjacent to the plant, was. This was likely because the T. A. Snider Preserve Co. had shut down the Goulds plant as part of its aggressive expansion plan. The company was a national firm which had its Florida headquarters in Delray and had processing plants in Florida City, Dania, Delray and other locations in Florida. The Florida City plant was managed by Edward Stiling, the initial promoter of the town and its mayor from 1918 – 1920.

Laban F. Lindley went back to Paoli at the end of the 1916-1917 farming season, where he managed the Tomato Products Co. plants in Marengo, not far from Paoli, and another plant in Hardinsburg, which is in Washington County, the county east of Orange County.28

The agricultural history of South Dade has unfortunately never been well-documented and is thus a very hard story to tell. The companies and people involved came and went quickly and it is only rarely that photographs of businesses like the Goulds tomato canning plant surface so that small parts of the story can be put together and told. Perhaps others, after reading this article, will be similarly inspired to share their photographs so that their stories can be told also.

Note: This article could not have been written if June Lindley had not reached out to the author and provided the photographs and family information that spurred the necessary research.