A friend recently posed a question to me about Glen Simmons that I could not answer so I set out to do so. Laura Ogden is the authority on Glen Simmons but I did not have ready access to her books, Gladesmen and Swamplife, both available through online booksellers. I started looking in the local newspapers for information about Glen and discovered that his father, James, was killed in an automobile accident in 1928 involving a Hupmobile driven by A. B. Cain. Algeron Benjamin Cain, Jr. was driving west at sundown on the East Glade Road (now known as East Mowry) in his Hupmobile and Glen’s father was a passenger in a truck driven by his 15-year-old son, Alvin, who was headed south on N. E. 2nd Road. Glen’s father was ejected from the truck in the accident and died of a broken neck.

I had known that Homestead had a Hupmobile dealership in the 1920s but knew nothing more about it. This post is about Hupmobiles, the owner of the dealership, M. E. Fletcher, and his relationship with the subject of my previous post, Stephen M. Alsobrook.

Mark Edward Fletcher was born on April 10, 1891 in Helena, Telfair County, Georgia, the son of James C. Fletcher and Martha B. Humphreys. In June of 1917, he was a flagman on the Georgia, Florida and Alabama Railway in Richland, Georgia. He and Annie Irene Alsobrook, the daughter of Stephen M. Alsobrook, were married in Silver Palm by the Rev. O. C. Seevers of the Methodist Episcopal Church, South on March 3, 1915.1 They moved back to Richland, where his first two children, Martha Corine and Milton Olynthus, were born. He then moved to Bainbridge, in Decatur County, Georgia, where his last two children, James Alsobrook and Thomas Stephen, were born. Thomas was born on February 21, 1922 so Mark did not come back to South Florida before then.

By 1922, Mark’s father-in-law, Stephen M. Alsobrook, had become quite wealthy through real estate speculation and had built the Alsobrook Filling Station, located on the southwest corner of Krome and N. 2nd Street in Homestead.2 Mark and his family apparently decided to move to Homestead to become rich like so many other people were doing. Shortly after he arrived in Homestead, his father-in-law set Mark up in business as a Hupmobile dealer.

On March 13, 1925, The Homestead Enterprise reported that “M. E. Fletcher has re-opened the garage building opposite the Enterprise office and is establishing his Hupmobile agency there. Mr. Fletcher announces that he will improve the building both inside and out.” 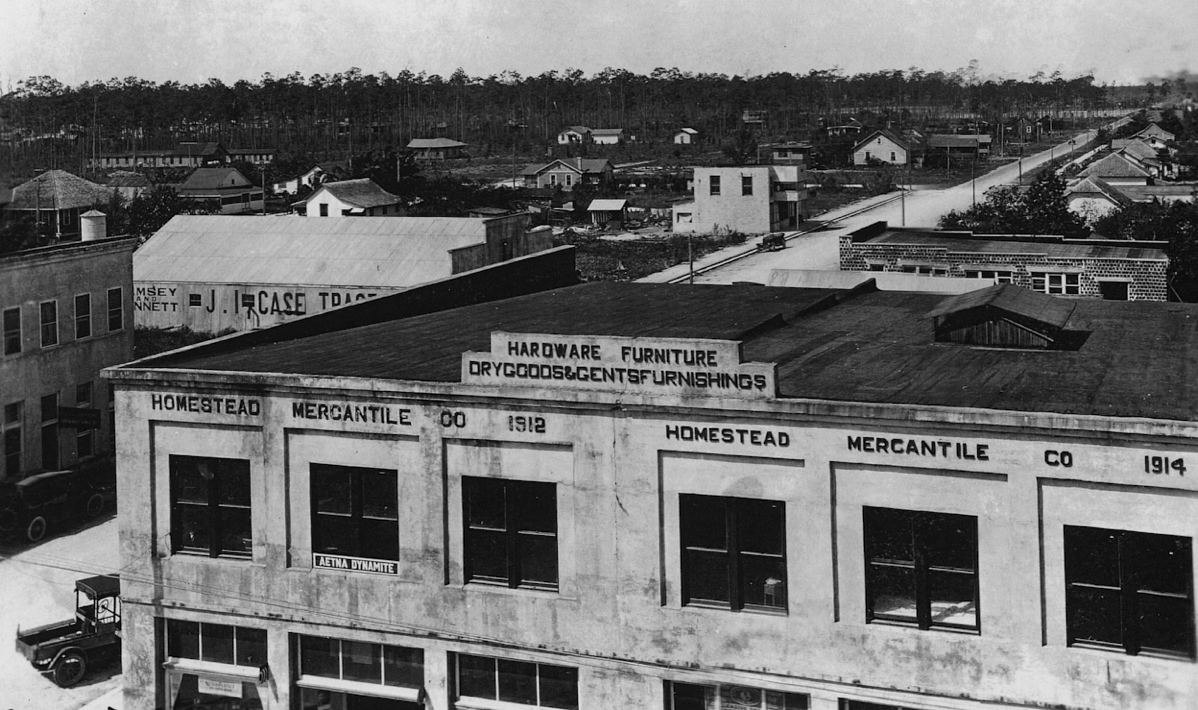 Fletcher’s Hupmobile agency was in the building at the left center in this photograph, the one that has the sign for J. I. Case Tractors on the side. This photograph was taken from the top of the Horne Building, a three-story building erected in 1923. The Bank of Homestead was enlarged in 1925, so this photograph was taken sometime between late 1925 and late 1926, when the ’26 hurricane caused significant damage to the Homestead business district. The Enterprise building is the tile-block building visible behind the Homestead Mercantile Co. building.

Mark only had a 9th grade education but with his father-in-law’s support, he became a member of the Redland Realty Board, with offices in the Alsobrook Arcade3 and established himself as a realtor.

Fletcher operated his dealership out of the garage building until October of 1925, when he sold the building to Dexter Smith.4 He moved his business to 414 N. Krome Avenue and advertised that location in the newspaper in April of 1926.5

On September 18, 1926, a severe hurricane struck Miami and also caused a lot of damage in Homestead. In October, Hupmobiles were being advertised by the Gordon Thompson Motor Co. at 103 N. Krome Avenue and by the Fletcher Motor Co., possibly because Fletcher’s business had been damaged by the storm.

The Fletcher Motor Co. was advertising the new Hupmobile Eight for $1945 to $2595 f.o.b. Detroit. Hupmobile had manufactured a 4 cylinder model from 1909 until 1925 and the eight cylinder model was new for the 1926 model year. 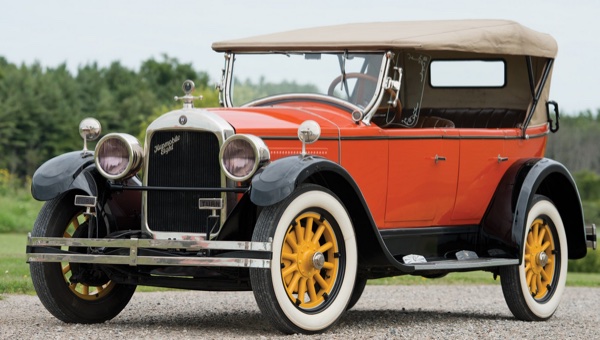 Hupmobile Eight
Courtesy of Sotheby’s Auction House
On November 2, 1926, Fletcher advertised the Hupmobile Six for $1385. The price for the sedan, coupe, and roadster were all the same and the touring car was slightly less expensive at $1325. 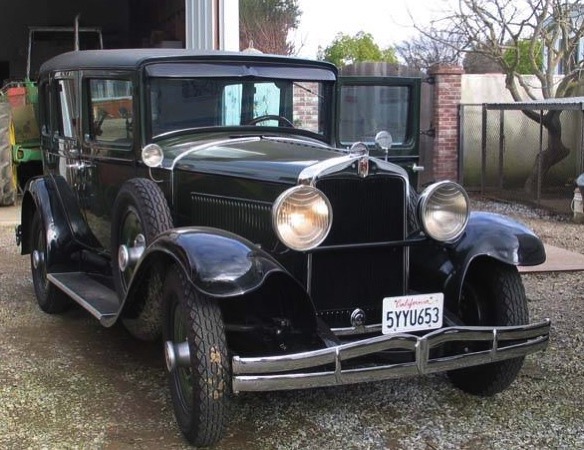 The Citizens Bank of Homestead, which was next door to the Alsobrook Arcade, opened on October 6, 19206 and failed on July 2, 1926.7 But the Bank of Homestead was still in business, though it would also close on June 17, 1927.8 Fletcher did not advertise much in 1927, possibly because he had as much business as he could handle. On November 8, 1927, the Homestead Leader noted that he would be showing the new 1928 Hupmobile models in his showroom at 414 N. Krome Avenue.

Both banks in Homestead were struggling to reorganize and re-open but neither succeeded. They were both granted multiple extensions by the State Banking Board but neither was able to raise sufficient funds to re-open. By the middle of 1928, the hopes of businessmen and citizens had been dashed and without a bank, economic activity in Homestead started to decline. No mention of the Fletcher Motor Company was made by the local newspapers in 1928 but several mentions of Stephen Alsobrook and Mark Fletcher in 1929 indicate that they had moved back to Tifton, Georgia.

An interesting note appeared in the August 29, 1929 issue of the Homestead Leader which stated that William Nobles had been arrested on a charge of making moonshine at his house “three doors west of Sixth avenue on King’s Highway.” Nobles was the owner of the meat market in Homestead before Charles T. Fuchs purchased it in 1913 and he also platted Nobles Addition to Homestead in 1913. Times were tough.

On September 28, 1929, a Category 3 hurricane struck Tavernier in the Florida Keys, causing significant damage to business buildings in Homestead. “The garage and show room building of the Fletcher Motor Co., on North Krome avenue, between N. W. Fourth and Fifth streets, crumbled under the force of the winds …”9 and that put the finishing touches on the saga of the Hupmobile in Homestead. C. C. Cooper, formerly with Fletcher Motor, advertised that he was “at [his] old stand – Garage in rear of 15 N.W. 2nd Second St.”10 and then, on November 21, 1929, it was reported that “M. E. Fletcher arrived Saturday from Fitzgerald, Ga., to wind up his business affairs in order that he may make his future home in Fitzgerald.”

In 1931, the Homestead Rotary Club donated $25 towards the cost of clearing the wreckage of the Fletcher Motor Co. building and a tennis court was built on the site, which was was owned by Stephen M. Alsobrook.11 The tennis court was later demolished when Robert E. “Lefty” Sherard built his dry cleaning business there.