The existing books about the history of South Dade, which include Jean Taylor’s The Villages of South Dade, Paul George’s A Journey Through Time and Robert J. Jensen’s From Railroad Boom to Sonic Boom, only hint at the social forces of class and race in their coverage of the history of this area. However, a close study of the remaining fragments of documentary evidence of the past in this area reveals a story that has been glossed over: a story of transience and social conflict. Thousands of people came to this area, stayed a very short time, and left. In this post, I am going to use the story of one man, Stephen Miller Alsobrook, who built the Alsobrook Arcade in Homestead, to show how transient this area has always been. Singling out one man doesn’t prove anything because thousands of others did the same thing. However, this essay may provide a starting point for others to develop this theme more fully. 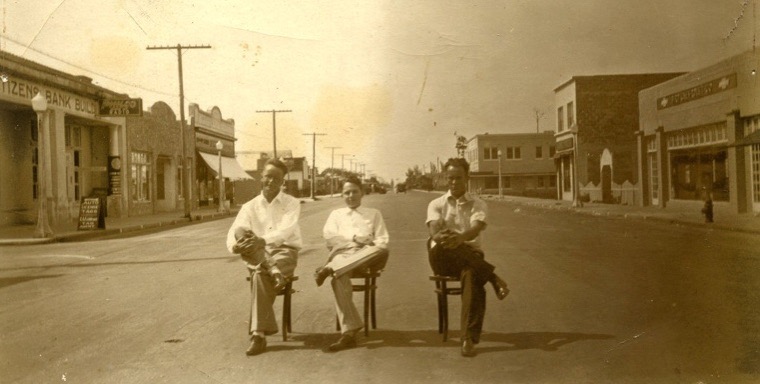 The Alsobrook Arcade is the building on the left, with the half-round architectural element at the top of the front wall, next to the Citizens Bank Building. It opened on December 13, 1928. The next building north, with the awning, is the McCrory’s 5 & 10 Store.

Stephen M. Alsobrook first appears in the census records in 1870, age 8, living with his sister Addie, age 12, in the household of King C. and Nancy Alsobrook Timmons, in Lanes Creek Township, Union County, North Carolina. King’s wife was Ann C., not Nancy – the enumerator made a mistake in entering her name. King owned 16 slaves in 1860 and was a postmaster in Union County from 1852-1855. Ann was the daughter of Lemuel and Sarah Elizabeth Alsobrook of South Carolina. Stephen’s parents were William M. Alsobrook and Louisa Timmons. King C. and Ann Alsobrook Timmons were his maternal grandparents. Cora J. Lowry, the future wife of Stephen, was the daughter of James A. and Flora A. Timmons Lowry. Flora’s parents were King and Nancy/Ann Alsobrook Timmons. Stephen and his wife’s parents are buried in the Montverde Cemetery in Lake County, Florida. Stephen next appears in the 1900 census of Montverde in Lake County, Florida, the same place that the Charles F. Ingram family, early South Dade pioneers, came from. In 1900, he was married to Cora and his children were James William, Irene and Addie. His son Charles, who also played a role in the history of Homestead, was born in 1901.

Sometime between 1901 and 1904, Stephen’s wife Cora died, perhaps due to complications from childbirth1 and he moved, with his children, to Modello, now known as Dania, in what was to become Broward County. There, he bought 40 acres of land in sections 2 and 3 in township 51 south, range 42 east and 5 lots in the newly platted town of Modello for a little over $600,2 which would be about $17,000 in 2017 dollars. Stephen was one of the freeholders who signed “a charter calling for Dania’s incorporation.”3 Arriving early, Stephen got in on the ground floor of real estate speculation in the area and made a fortune buying and selling property in the years after 1904. A brief mention in the Miami Daily Metropolis on October 26, 1906 read, “Mr. S. M. Alsobrook has purchased the hotel formerly called Wisconsin Hotel and has also bought a large tract of land near Dania. Mr. Alsobrook is one of our largest real estate dealers here.”

The first known mention of Stephen Alsobrook in Homestead appeared in the The Weekly Miami Metropolis on May 31, 1912, when it was noted that he had purchased lots 11, 12 and 17 (37 1/2 acres) of J. U. Free’s homestead for $1,000.4 In 1914, he bought lots 7 and 8 of W. D. Horne’s subdivision from Leonard S. Mowry, Sr.5 A few months later, it was reported that S. M. Alsobrook planned to erect a two-story concrete building, 100′ x 100′, on Krome Avenue.6 The ground floor was “to be occupied for store buildings and the upper for a rooming house.” This building likely did not get built, though. In 1915, he left his grove in Homestead and returned to his farm in Dania, where he raised Berkshire and Poland China hogs.7 He may have returned to Dania to live, but he did not sell his grove in Homestead because another article in the newspaper stated that grapefruit from his grove was part of a shipment packed by W. D. Horne’s packing house in 1916.8

In July, 1919, Stephen platted Alsobrook’s Addition to Homestead, which is located south of S.W. 2nd Street, west of the busway. It is bordered by J. U. Free’s Addition on the the north and is recorded in book 4 on page 171 of the records of Miami-Dade County. 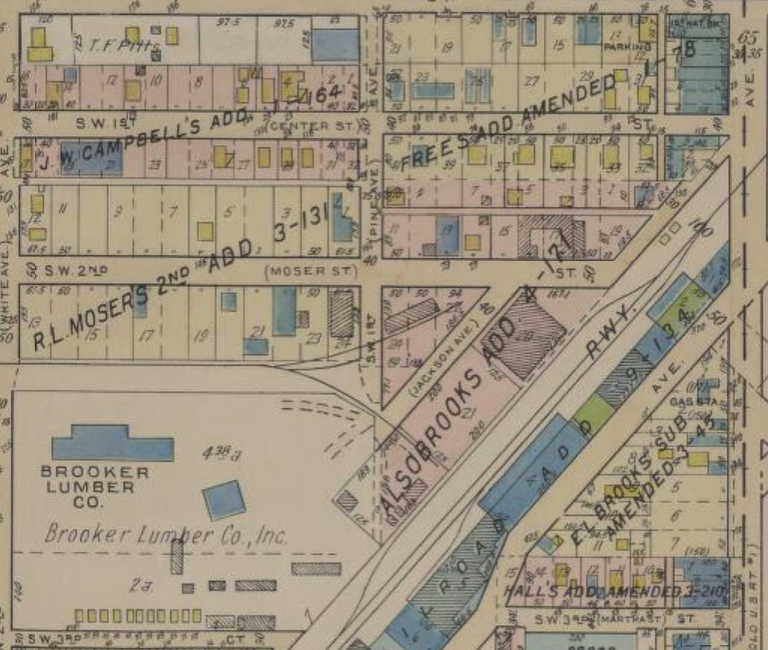 In 1921, Stephen Alsobrook made his largest and most profitable real estate transaction when he sold 400 acres for $250,000 to Joseph W. Young, who developed the tract into the city of Hollywood.9

Stephen’s son, Charles, was a principal in the Miami Oil Company, distributors of “Marathon, Texaco and Mioco Oils and Greases,” located at 71 -75 N. E. 24th St. in Miami.10 In 1922, Stephen invested $5,000 in Homestead, building the Alsobrook Filling Station in Homestead11 at the southwest corner of N.W. 2nd Street and Krome Avenue, where Jacobsen’s now stands. 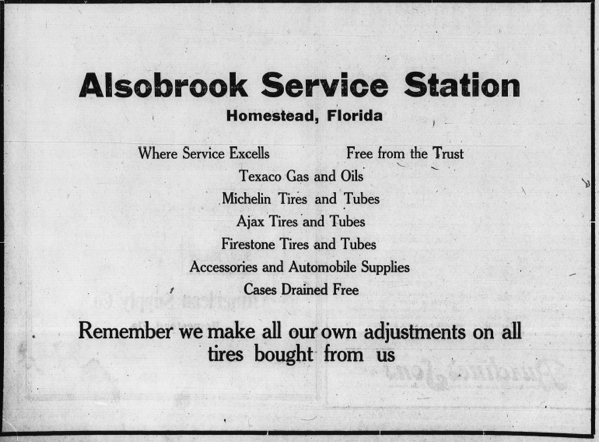 Homestead Enterprise, March 30, 1923, p. 8
Charles owned the filling station. Henry Peters, who worked for the Homestead municipal power plant, was one of their employees.12 In early 1924, Archie J. Campbell purchased the station from Charles M. Alsobrook and on May 1, the name was changed to the Central Filling Station, managed by B. D. Brown and C. C. Weaver, long-time friends from southwest Georgia.13 It was known as the Central Filling Station at least as late as December 25, 1930, when an advertisement for the business with that name was published in the Homestead Leader, so that dates the photograph below to sometime after that date. 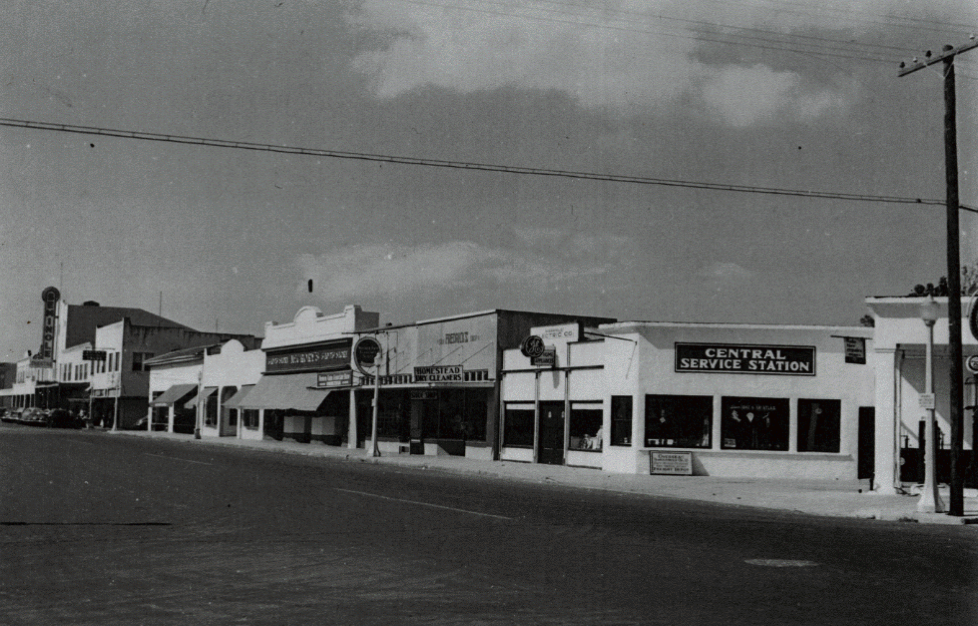 In this photograph, you can clearly see the McCrory’s 5 & 10 store with the awning across the entire front of the building and the Alsobrook Arcade next door to it to the south.

Here is a closer look at the Alsobrook Arcade and the McCrory’s Store next door: 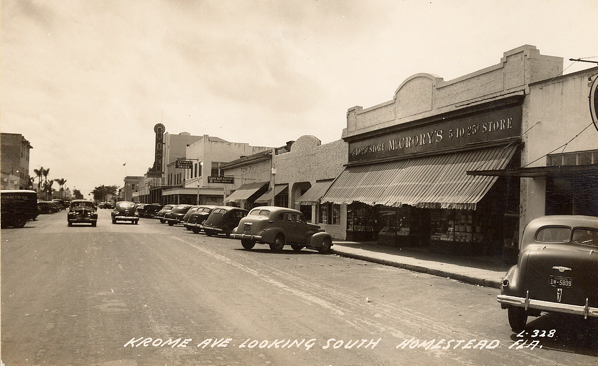 Late in 1924, Alsobrook had plans drawn up for the Alsobrook Arcade. The building was already under construction in January, 1925, when he changed his mind and decided to build a “fifteen-foot aisle from Krome to the alley in the rear, with small stores on each side.”14 According to the newspaper article, there was “a popular demand for this type of building in Homestead, as there are a number of real estate brokers, as well as small shops, which take up all these spaces before they are built.” One of the rooms in the arcade was leased by Thomas Piché and Virgil M. Grennell, principals in the firm of Piché & Grennell, agents for the new development of Redondo, at the southeast corner of Redland Road and King’s Highway.15 Another space was leased by Starr-Coleman, developers of Plaza Coronado, on Avocado Drive just west of the Dixie Highway. An advertisement in the Miami News on January 14, 1925 promised that the “purchase of a lot in Plaza Coronado today means quick profit!” Other tenants included Froscher and Rutland, Realtors; Carr & McFadden, Civil Engineers; Rockhill & Bird, Realtors; Russell & Dickinson, Realtors; June Baker, Notary Public; William Karl Walton, grove developer and realtor; Sherwood Hodson, another realtor; Edward C. Loveland’s Redland Sales Co., the Redland District Realty Board,16 Peninsula Jewelry Co., a Singer sewing machine store, the office of Dr. B, F. Stebbins, the Elite Hat Shoppe and McKinley “Mac” Hardee’s shoe store. The Bird in Rockhill & Bird was Preston B. “Bunny” Bird. Edward Loveland’s wife, Agnes, played an important role in the construction of the lodge in Royal Palm State Park. Dr. Bertrand F. Stebbins wife, Edna, was the daughter of Tom and Floretta Evans, one of the early owners of the Redland Hotel. Mac’s wife was Gerda Fread, the daughter of Leonidas, who came to Homestead in 1911 and platted Fread’s Addition to Homestead.

In 1927, the Lockerby building, adjacent to the Alsobrook Arcade on the north, was purchased by McCrory’s 5 & 10 so that it could be converted into a new store in their growing empire, which ultimately comprised about 1,300 stores. At the same time, they also purchased the Alsobrook Arcade, later renaming it as the McCrory Arcade before removing the dividing wall and incorporating the space into its department store. McCrory’s 5 & 10 was founded by James G. McCrorey in Scottdale, Pennsylvania in 1882.

There is not much documentary evidence about Stephen Alsobrook for the years 1926 – 1930 but he and his wife apparently lived in Miami at 141 N. E. 20th St. and monitored their investments in other places. A brief mention of the couple in The Homestead Leader,17 noted that he and his wife lived in a “palatial home … 20 miles out of Hendersonville,” NC.18 They also maintained a home in Homestead on N. E. 5th Street and the Dixie Highway and the one in Miami. The Alsobrooks had moved out of their Homestead home by the spring of 1929, when Mr. and Mrs. Louis Knight moved into it.19 By March of 1929, Stephen’s interests had shifted to Tifton, Georgia, where he had planted a large grove of pecan trees20 21 but he still had business interests in Homestead.22 The 1930 census enumerated him and his second wife, Nettie Cooper,23 whom he had married in 1924, in the Chula District of Tift County. He was 68 and she was 44.

When Stephen died at his home in Tifton, Georgia on November 6, 1939, none of his children lived in the Homestead area. He is buried in Lake County, Florida, next to his first wife and their infant daughter Alene. His three children are buried in Tift County, Georgia. Stephen, like a number of others in Homestead, became a very wealthy man by speculating in real estate, most of which was not located in the Homestead area. He never had any roots in Homestead – his only interest in this area was to make money. In that, he had (and still does have) a lot of company. It doesn’t seem as though he was able to pass on much wealth, though, as both of his sons were small-scale farmers. Charles B. farmed in Tifton, Georgia and James W. farmed in Port Orange, Florida. Irene married Mark E. Fletcher, who owned the Hupmobile dealership in Homestead, but divorced him in 1931 and married John T. Childers. In the early 1940s, John worked for the J. N. Strong Packing House in Vero Beach, Florida.