The subject of the Miami Land & Development Company (M. L. & D Co.) has not been covered in any detail by historians. In this article, I’m going to explain how it came to be and the role that one man, James M. Powers, played in its founding. The M. L. & D. Co. was a partnership between the Tatum brothers and Oklahoma capitalists and it was founded to promote the development of their property east of what is now known as Florida City. Powers was well-connected with those Oklahoma capitalists. The company was one of many companies owned by the Tatums and was founded in 1911, after the town of Detroit was first promoted in the late summer and fall of 1910. The Tatum brothers went on to promote many other projects in South Florida, but that is outside the scope of this article.1

The Tatum brothers were originally from Gilmer County, Georgia and had migrated to the area around Bartow, Florida in the mid-to-late 1880s. Bethel B. Tatum was the first to come to Miami, in late 1899. He purchased The Miami Metropolis and assumed the position of editor in January of 1900. The other three brothers came in subsequent years. The Tatums established a number of companies, the largest of which was the Tatum Bros. Real Estate & Investment Company.2 On the plat3 of the lands that the Miami Land & Development Company acquired to establish Detroit, James M. Powers was listed as the Secretary. Who was James M. Powers and how did he come to be the secretary of the Miami Land & Development Co.?

James M. Powers, along with his sons Ralph J. and Fred B., are names that appear often in the early documentary records of the history of this area. James was a close friend of Thomas H. Dunn, John H. Young, Alexander R. McLennan and J. Robert Gillam, who provided the capital to the Tatum Brothers to found the Miami Land & Development Co. in 1911. James and Ralph figure prominently in the founding of Detroit. T. Floyd Monier, who was the husband of James’ daughter Edna, is only briefly noted in the documentary sources, but he, too, played a role in the early days of Detroit. James’ other son, Fred B., was the last to leave Lawton, Oklahoma and worked in Miami, for the most part, before dying in an accident in 1920.

James Monroe Powers was born on November 1, 1856 in Streator, LaSalle County, Illinois. He died at his home in Miami on February 1, 1926.4 His gravestone in Henry, Illinois inaccurately gives the wrong years, 1855 – 1925. By his first wife, Mary J. Cannon, he had three children: Edna, born on February 13, 1882;5 Ralph James, born on December 9, 1884;6 and Fred Bemarr, born on December 12, 1886.7 Velma Ruth, born on December 3, 1907, was his daughter by his second wife. In the late 1880s, James moved from the growing town of Streator, in LaSalle County, to the small community of Henry, not far away, in Marshall County and established a general merchandise business. His wife Mary died in 1899, so in the 1900 census, James was enumerated as “widowed.” He, his daughter Edna and sons, Ralph J. and Fred, were living with him. On January 28, 1901, Powers suffered a major loss when a fire in Henry destroyed an entire city block, including the department store that he owned.8

Later that year, James married Sarah Lillian Runnels. Rather than rebuild in Henry, James moved his family to the booming town of Lawton, Oklahoma. Located in southwestern Oklahoma, Lawton was founded on August 6, 1901 and named after Major Gen. Henry Ware Lawton.9 When it was founded, almost 25,000 people bid on the 1,200 lots in the town. By 1907, the population of the area was 5,562 and by 1910, that figure had increased to 7,788. The population boom was largely over by the early years of the 1910s, increasing only to 8,930 by 1920.10

Taking advantage of the rapidly increasing population, James established the Powers Motor Car Co. and in 1906, he and his wife, along with Judge Henry W. Hanna and his wife, set a record for automobile touring in the Southwest, traveling 150 miles in 16 hours on “country roads.”11 James also got into the real estate business in Lawton and established the Powers Land & Loan Co. His son, Ralph, was the manager of that company and his son-in-law, T. Floyd Monier, worked as a salesman.12 The Powers Motor Car Co. was sold in 1911 when James moved to Miami.13

While in Lawton, he made the acquaintance of Alexander R. McLennan, Thomas H. Dunn, John M. Young and J. Robert Gillam. Alexander McLennan helped organize the Oklahoma State Bank and was its cashier.14 He was also president of the Chamber of Commerce in Lawton. Thomas H. Dunn organized the Lawton National Bank and was its cashier for seven years. John M. Young was a prominent attorney in Lawton and the secretary of the convention that wrote the Oklahoma State constitution. J. Robert Gillam was a well-to-do cattle rancher in Lawton. All were wealthy and prominent businessmen in Lawton.15

In early 1910, the Tatum Brothers, through their Tatum Bros. Real Estate & Investment Co., purchased 9,000 acres of land south of Homestead from the Model Land Company, the real estate holding company of the F. E. C. Railway.16 They started heavily advertising their property in Detroit, Michigan,17 Miami, Tampa,18 Ohio,19 South Dakota20 Knoxville, Tennessee21 and other locations around the country. The response was unexpected – more settlers than the brothers expected purchased property. To capitalize on the demand for their property, the Tatums secured capital from the Lawton men through their relationship with James M. Powers.22 James had visited Miami, staying at the Hotel Halcyon, in late January of 1911.23 The Miami Metropolis opined that “before leaving this section, he will in all probability invest extensively in real estate here.”24 The additional funds from the Oklahoma men allowed the Tatums to create the Miami Land & Development Co. with a capitalization of $500,000 in February of 1911.25 B. B. Tatum was president, A. R. McLennan in Lawton was vice-president and T. H. Dunn, who had moved to Miami, was the secretary-treasurer.26 5,000 shares were issued, with a par value of $100 per share. J. H., B. B., and S. M. Tatum received 830 shares each, while Dunn, McLennan, Young and Powers received 625 shares each.27 With this capital, the company purchased additional land until they owned 26,000 acres. The 26,000 acres included the large bay-front tract known as The Cedars.28

By early 1912, James had moved his family to Miami, where he opened a branch of the Powers Land Company (the main office of the company was in Lawton) and joined the Miami Real Estate Board.29 Later that year, James’ son Ralph moved to Homestead to manage the office of the Miami Land & Development Co. there. They opened for business on October 28th.30 31 Ralph, with his brother Fred, had run his father’s company in Lawton.32 In March of 1914, Ralph moved his office from Homestead to Detroit, locating next to the Hotel Detroit on Palm Avenue (now Palm Drive).33 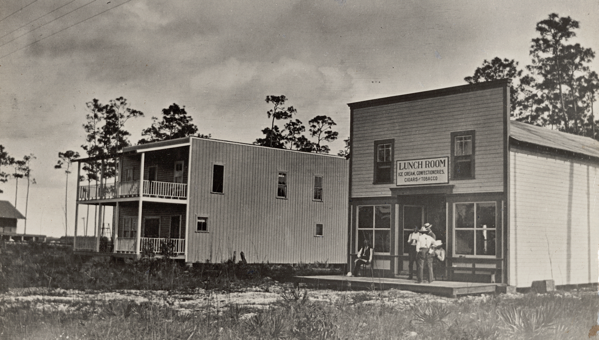 The Hotel Detroit
Courtesy of the Florida Pioneer Museum

The Hotel Detroit, in the middle, was located just west of the F. E. C. railroad tracks on the south side of Palm Drive. The south end of the roof of the Detroit F. E. C. depot can be seen on the left. In the photograph above, the Lunch Room, right, was owned by a number of men, among them Joseph Rustadt.

In October of 1912, James moved his family from Miami to Detroit, where he became the manager of the office of the Miami Land & Development Co.34 In August of 1913, he assumed the position of secretary-treasurer of the company, taking over from Thomas H. Dunn.35

James moved his family back to Miami in early 1916, when he was elected as a director of the Miami Land & Development Co.36 Powers worked out of the office of the company, located at 214 Twelfth St. (now Flagler). He advertised that he was looking for a “house and lot” east of Avenue D (Miami Avenue) but was not successful.37 James ended up purchasing a new house, which he named “Hilldale,” in Riverside Heights (a Tatum subdivision), at the corner of Avenue S and 11th St. (N. W. 1st St. and 15th Avenue).38

Powers left the Miami Land & Development Co. in late 1919 and moved to Atlanta, Georgia with his wife Lillian and daughter Velma, where they were enumerated in the 1920 census in Ward 8. James’ occupation was listed as “President – Publisher Manufacturer” and his wife was listed as a teacher. That evidently didn’t work out, because they returned to Miami, where he established the Peerless Water Company, which sold bottled water. It was located at the corner of S.W. 3rd St. and 18th Avenue.39 The Powers family lived a short distance away, at 1658 S.W. 3rd St. Their son Ralph, who had opened a real estate office on the Elser Pier, located on the water at the foot of Flagler St., lived with them.40

In the 1923 City Directory, James M. Powers was listed as a salesman for the Everglades Land and Development Company, one of the many dozens of real estate promotion companies in South Florida during that era. Their offices were in the Tatum Building, across from the Hippodrome Theatre,41 at 210 E. Flagler St.

In the 1924 Miami City Directory, James’ son, Ralph J., was a principal in the firm of Powers & Young, “Dealers of Real Estate of the Higher Class – We Offer Guaranteed Investments.”42 The Young in Powers & Young was John H. Young, one of the Lawton men who provided the capital to form the Miami Land & Development Co.43 They were located in suites 408-410 of the Calumet Building at 3rd Avenue and E. Flagler. Ralph and his wife lived at 344 N.E. 29th St. Ralph’s brother, Fred B., had died in 1920 and his widow, Blanche M., lived at 327 N.E. 24th St., a short distance from her brother-in-law.

James Monroe Powers died at his home in Miami on February 1, 1926, at the age of 69. He is buried in the Henry Cemetery, in Henry, Illinois, along with his sons, Ralph and Fred.

James’ story is very similar to many others who were mentioned in The South Florida Banner and The Homestead Enterprise in the years 1912 – 1917. He came to Miami, moved to South Dade and stayed a few years, returned to Miami and died there, his body being shipped back to Illinois, where he came from. He was well-enough remembered in Homestead that his obituary was published in the local newspaper44 but like so many others, he left no lasting mark on this area.

The Miami Land & Development Co. continued to promote its Florida City lands well into the 1920s. In early 1922, the Tatum Brothers launched an audacious scheme to sell 10,000 acres of their land in 10-acre parcels with a town lot and $750 in stock in their Florida City Oil & Land Co. for $1,000.45 On April 12, 1924, the Tatum Brothers took out a full-page advertisement in the Miami Daily News and Metropolis, showing photographs of the officers of the company and the heads of its various divisions. Bryan H. Edwards was in charge of sales in Florida City.46