In January, 1903, construction started at the south side of the Miami River on what was then called the Cutler Extension of the Florida East Coast Railway. The route was surveyed by John S. Frederick, who platted the Town of Homestead in June of 1904. After the railroad reached Homestead, the name was changed to the Homestead Extension.

Town of Homestead
Much of the land east of the limestone ridge that separates the Everglades from the coastal plain south of Miami had been given to the Florida East Coast Railway by the State of Florida as part of its incentive for Henry Flagler to build his railroad. A portion of that land in the area of Goulds is shown, either cross-hatched or with diagonal lines through the sections, on the map below. After the railroad reached Homestead in late August, 1904, farmers who had not been able to file a homestead claim started eyeing what William J. Krome had called the “front prairie” in these areas – the low-lying marl soil east of the limestone ridge. Unlike the pine rockland, there were few trees to cut and the sawgrass could be plowed under with tractors. Once the land was cleared of vegetation, farmers were able to raise abundant crops of tomatoes and other vegetables. Thomas J. Peters, among others, had already been farming the “Cutler prairie” and the word had spread about the opportunities to become rich by farming these lands.

As I wrote in my post about Franjo Road, John Ehrehart purchased substantial acreage below Cutler from the Model Land Company, Flagler’s real estate holding company, as early as 1908. John C. Baile had done the same in the area east of Goulds as early as 1909. The Tatum Bros. had purchased thousands of acres from the Model Land Company in 1910 east of Detroit, now known as Florida City. Dr. William S. Burkhardt, from Cincinnati, Ohio, purchased 1,160 acres south of John Ehrehart’s holdings in early 1911. He named his property Seminole Plains.

All of this land was called “overflow land” as it was subject to flooding in the summer as water from the Everglades drained into Biscayne Bay via the finger glades that crossed the limestone ridge in numerous places. One of those finger glades was in the area where Silver Palm Drive (S.W. 232 St.) intersects U. S. 1 today. There was a navigable waterway, called Black Point Creek, that ran through this finger glade out to Biscayne Bay, emptying into the bay just west of Black Point. This map, from 1904, shows Black Point Creek. Click on the title beneath the map below to download a version that can be enlarged.

This excerpt from a recent NOAA navigation chart shows the Black Point Marina, the east end of the Goulds canal and Black Point. What is labeled as “Ditch” is part of the original canal. 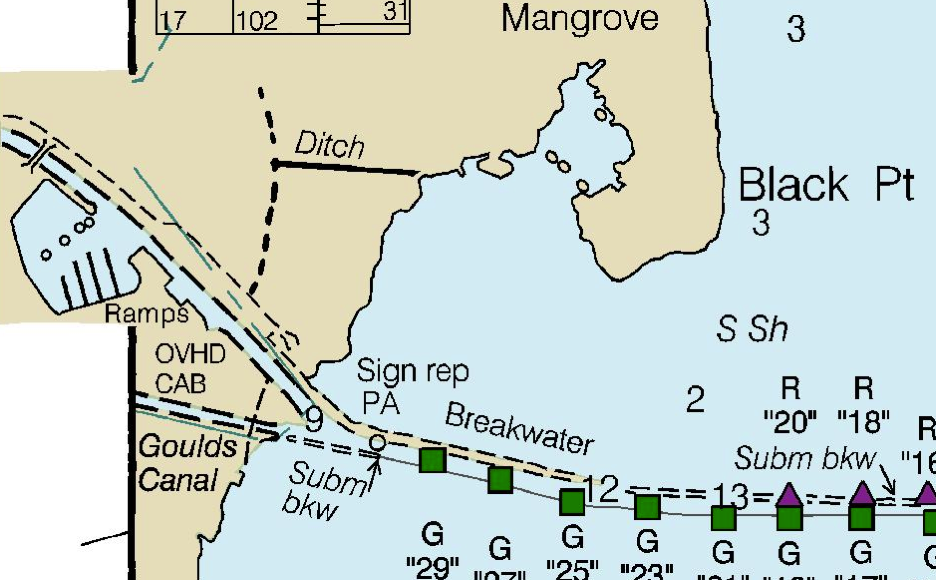 The settlement of Black Point, not to be confused with the geographical feature of Black Point, was on part of the land homesteaded by Henry H. Harrison south of Silver Palm and west of the railroad tracks. The houses in Black Point were largely inhabited by African-American agricultural workers into the late 1940s, if not later. Most of the houses were built by Charles R. Graham, who had purchased his land from Harrison.

John C. Baile, as I wrote in my post on Baile’s Road, was the first to attempt to deal with the flooding problem in the overflow lands. He built a system of levees and installed large pumps in an attempt to convert the land to agricultural use. His scheme largely failed and the farmers in the area faced repeated crop failures from flooding. After the canal from Detroit to Biscayne Bay was completed in 1912 by the Miami Land & Development Co., Baile and his fellow investors took note.

A heavy rainfall on March 14, 1919 that wiped out 50% of the tomato crop on the front prairie was the event that spurred the creation of the Goulds Special Drainage District No. 1. Nine property owners, including A. Lee Allen, Charles L. Gibbons, William H. Cauley, Richard Ashby and John M. Green, signed a petition to create the district and submitted it to the County Commission on April 11, 1919. John C. Baile, both individually and as president of the Campo Rico Trucking Co., the largest farming operation in the district, also signed the petition. The purpose of the drainage district would be to fund the excavation of “Baile’s Ditch,” as it was called in the newspapers.

The district covered about 3,000 acres and was on both sides of what is now S.W. 248th St. from about S.W. 119th Avenue to the Bay. The Model Land Co. owned the majority of the land in the proposed district and hired their good friend, former Gov. William S. Jennings, to lobby against its creation because they would have had to pay additional taxes on their holdings. The County Commission, led by John C. Baile, who was also a Commissioner, prevailed and the District was established. Baile had a friend in Preston H. Lee, who was also the County Commissioner from Goulds and an early homesteader in the area, having filed his homestead claim in October of 1904.

The County Commission appointed a committee of three men “to secure an accurate survey of the proposed ditch, drain or canal and establish the point of beginning, route and terminus … [obtain] specifications and profiles for such construction [and estimate] the approximate cost of such improvement and the annual cost of its maintenance” according to an article in The Miami Metropolis on July 11, 1919. Those men were Curtis E. Lee, a brother of Commissioner Preston H. Lee, Charles H. Miller, a homesteader whose land was east of Princeton on Coconut Palm Drive1 and Harley R. Core, a Congregationalist minister who had come to this area in 1911 from Iowa and taken up farming. They hired Biscayne Engineering and one of its employees, Reuben J. Eby, completed the survey.

The Goulds Special Drainage District No. 1 sold $52,000 of bonds to the Bank of Biscayne in Miami in late November of 1919 and the contract to dig the canal was formally awarded to the firm of Collins & Holloway on December 17, 1919. Work was started very shortly thereafter and the canal was finished by late August of 1920. It was initially 24′ wide, 7′ deep and 3.5 miles long. Emmett E. Collins was a dredging contractor, as was Wade H. Holloway. They formed a partnership to bid on the contract but had a falling out shortly after the Goulds Canal was completed. Holloway filed a restraining order against Collins to prevent him from disposing of the firm’s assets. Collins was the contractor who worked on the Detroit Canal (now known as the Florida City Canal) for the Miami Land & Development Co. and Holloway was based in Fort Lauderdale. Holloway went on to do a lot of road and canal work in Canal Point, on Lake Okeechobee.

The 1920 census of Goulds and Princeton gives the names of some of the men who worked on the dredge. They were Henry E. Wells, 34, an engineer who was born in Florida; John B. Baker, 65, a laborer born in Georgia; George W. Holloway, 29, a laborer born in Florida and a brother of Wade H.; Harry C. Baughman, 48, a civil engineer born in Ohio and Carl Gulbrandsen, 21, a laborer born in Florida whose parents lived in Perrine. The dredge was likely made by the Bay City Dredge Works in Bay City, Michigan. No photographs of any of the dredging work are known to exist but perhaps some will surface that are owned by a reader of this article. A dredge used in the construction of the Tamiami Trail, made by the Bay City Dredge Works, is in the Collier Seminole State Park near Naples.