I was recently sent a series of photographs taken in Detroit in 1911. I’ve managed to identify some of the people in the photographs. One of them, I think, is that of Alice M. Graves, wife of Thomas L. Graves, who came to Detroit in 1911 from Pontiac, Illinois, where he was a teacher. In researching Thomas, I came across this most interesting advertisement in the South Florida Banner for the Dade County Telephone Co. in Homestead.1 It lists the number of rings to call other subscribers. Click on the title below the image to view a larger and more readable image. 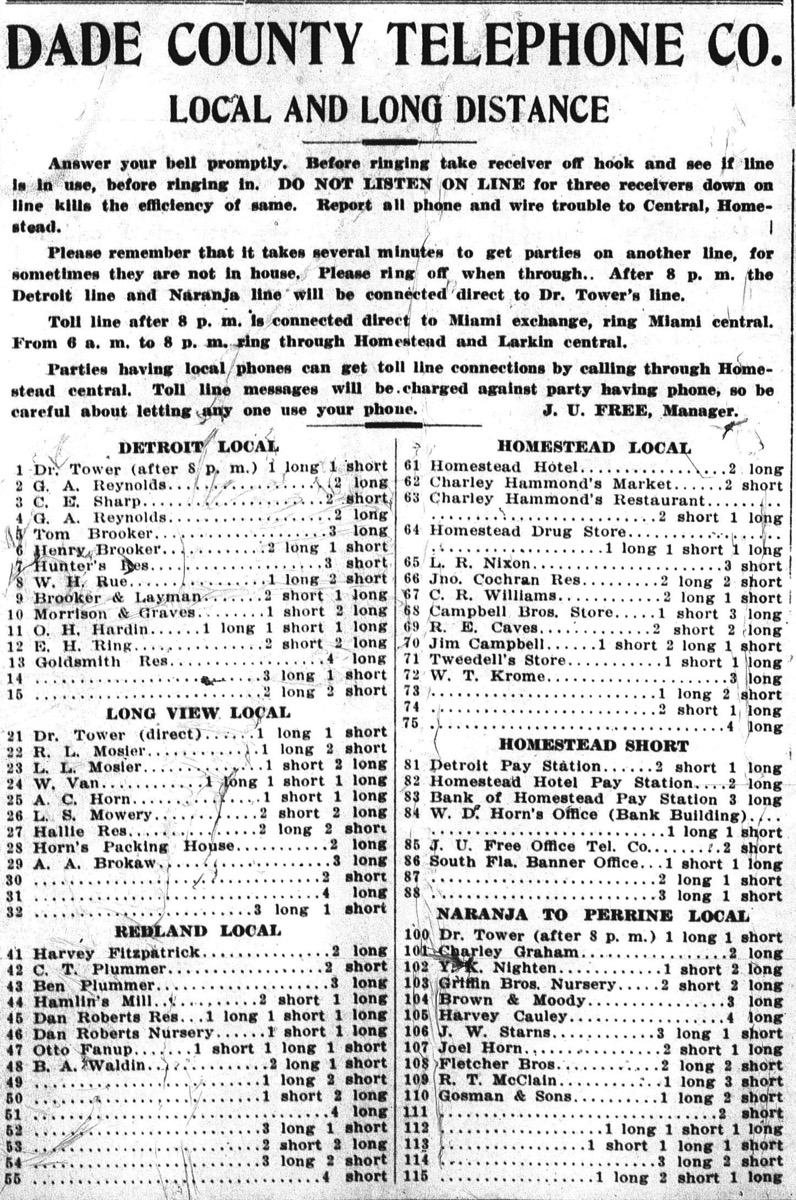 What intrigued me about the advertisement is that a company called “Morrison & Graves” is listed in the Detroit Local section. Roy A. Morrison and his wife Lura B. were from Pontiac, Illinois also. Like so many other pioneers in this area, he moved to Miami by 1920 and became a successful real estate broker, sending his twin daughters to college. It is reasonable to assume that the Morrison & Graves company was involved in real estate in Detroit. Edward Stiling and the Brookers were not the only people involved in real estate in Detroit by any means.

I have published posts on E. H. Ring, the Brooker family, Walter Tweedell, J. U. Free and the recollections of Charles Gossman.

Note that Tom and Henry Brooker lived in Detroit, not in Homestead, in 1912. Note also the presence of pay stations, where customers would go to make long distance calls. It is interesting to see that there were no telephone numbers in the Homestead area at this early date.

In 1912, there were approximately 1,500 people living in the area south of Goulds so this very short list of telephone subscribers indicates how uncommon telephones were in this area at that time. Presumably, people who did not have telephones in their homes had to go to a pay station to make a call. There was another telephone company in the area at the time, the People’s Telephone Line, owned by Walter Frazeur, but it primarily served the Redland area.

History, despite its wrenching pain, cannot be unlived, but if faced with courage, need not be lived again.