In my article about telephone subscribers in Homestead in 1912, Walter Tweedell’s store is listed as being one of the subscribers. In the article about early workers in Homestead, it was mentioned that J. U. Free had sold his store to W. J. Tweedell. There was also a reference to W. J. Tweedell acting in his capacity as a County Commissioner in the article on the Women’s Industrial Club of Detroit. He and another Commissioner received a letter from the Trustees for the Internal Improvement Fund in early 1915 instructing them to take steps to prevent trespassing on the lands that would become part of the new Royal Palm State Park. Jean Taylor, in her book, The Villages of South Dade, mentions Walter Tweedell only briefly1, so, because he was a County Commissioner, I thought it important to find out more about him.

Walter Jackson Tweedell, referred in the newspaper accounts in this area as W. J. Tweedell, was born on January 4, 1876 in Gordon County, Georgia.2 His parents were James A. Tweedell (1836-1907) and Nancy E. Groover (1840-1919). His grandfather, A.W.H. Tweedell, judging by the prominence of his monument and the fact that he was a minister, was probably the preacher at the Sugar Valley Methodist Church in Sugar Valley, Gordon County, Georgia.

The next appearance of Walter J. Tweedell is in the 1900 census of Cocoanut Grove precinct 4, in Florida. No doubt, he rode Flagler’s train to Miami and then walked further south. In that census, he and his brother Erving G. (Erving Groover) were living in the household of Charles and Melvina F. Gossman, with their children Henry A., Jesse E. and Charles W. Interestingly enough, there was another lodger living with the Gossmans of interest to those of us here in South Dade: Will Anderson, born in September 1878 in Indiana.

Walter Tweedell and his brother, Erving G., established a small store in the community of Cutler about the same time as George W. Moody. After Moody moved his business to Perrine, the Tweedell brothers “moved from their old stand” into “the stores formerly occupied by Brown & Moody.”4 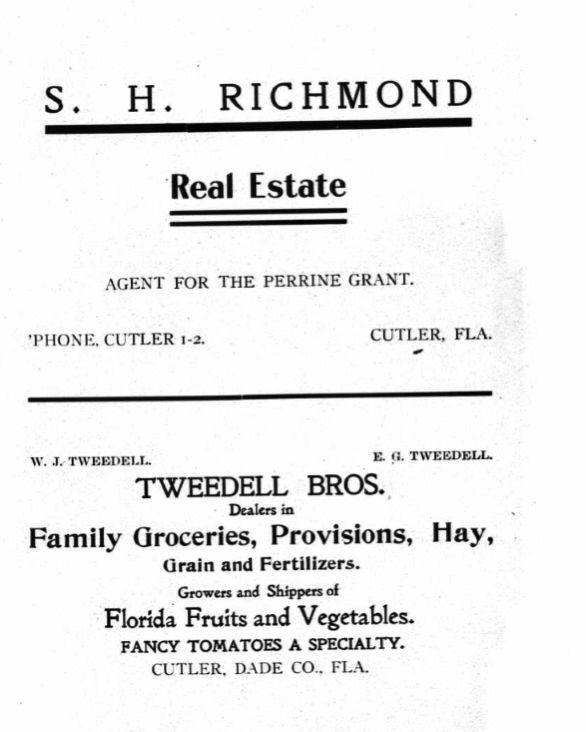 According to an article in this same source, there were two stores in Cutler: Tweedell Bros. and Brown & Moody. Brown & Moody later moved to the Naranja area – the Moody of Brown & Moody was George Walter Moody, for whom Moody Drive is named.

Erving, Walter’s brother, stayed in Cutler, which is probably why he surrendered his homestead claim in the Redlands to his brother. As early as March 21, 1904, he was advertising in The Miami Metropolis in a race against Samuel H. Belcher for the right to run for County Commissioner in District 5. He defeated Belcher in the Democratic primary on May 105 6 and defeated Walter Waldin in the general election held November.7 On June 27, 1905,8 9 he married Amelia Louise Morrow in Key West. A son was born to them on September 6, 1906 but unfortunately, he died at the age of one day. Erving ran for re-election in 1906 and won a second term.10 In February of 1907, Erving and his wife moved to Miami, where he opened a dry goods store in the Hamilton Building on Avenue C near 1st St.11 At that time, he and his wife lived on 1st Street near Avenue D.12 Shortly after moving to Miami, Tweedell resigned13 and A. T. Carter, of Larkins, was appointed to replace him.14 His grocery business in Miami was short-lived, though, because by 1908, he and his wife had moved to Lakeland,15 where he opened a grocery store.16

On February 4, 1904, Walter married Maisie I. Park in Key West. That was before Flagler’s railroad had reached Key West, so Walter must have been in Key West for some other reason than to go courting. Since he and his brother owned a store, perhaps he was buying merchandise for it. At that time, Key West was a much larger city than Miami. In the 1900 census, both Maisie and her parents were shown as having been born in the Bahamas. That wasn’t unusual at all – there were (and still are) quite a number of Conchs who trace their ancestry to the Bahamas. Their son, Carl Lee Tweedell, was born on January 3, 1905.

Walter picked up his brother’s homestead relinquishment in February of 1905 and worked to prove up his claim. He was appointed the clerk of elections for precinct 14 in late December of 190917 for a bond election to be held on January 3, 1910. The vote was whether to approve a bond issue of $150,000, $75,000 of which was to be used to pay off indebtedness and the balance to be used to build roads in the “various districts of the county.”18 The polling place was at John Bauer’s store on Redland Rd., just south of Bauer Drive. The bond issue was approved, 351 – 116.19 Shortly after the approval, Bayard C. Murden of Naranja, Henry H. Harrison of Black Point and Walter J. Tweedell of Redland were appointed to stake out a road running north from the Naranja F.E.C. depot at the railroad tracks and S.W. 147 Avenue and then west on Coconut Palm Drive to the Redland School house at the corner of Coconut Palm and Redland Road. The petition for the road was signed by Otto Froreip and 11 others.20 This was the beginning of Tweedell’s work promoting roads, continuing after he was elected as a County Commissioner for District 5.

Thomas Brewer, the first County Commissioner from Homestead, defeated Charles T. Plummer, 189 – 105, in May of 1908.21 He was re-elected in 1910 but declined to run for the seat in 1912, opting to run for Dade County Sheriff. He apparently changed his mind, though, and ran for the State legislature instead.

By June of 1911, Walter had moved up in political circles, becoming a member of the Dade County Democratic executive committee.22 In the Democratic primary for the County Commission seat in District 5 in May of 1912, Tweedell defeated David C. Brown, who had homesteaded land on Tennessee Rd. and what is now 280th St.23 In April, 1912, he won the Democratic primary and in November of that year won the general election for District 5 of the County Commission, representing Homestead. He defeated Roy D. Marsh, 855 – 411,24 a surveyor whose name appears on many early plats in the Homestead area.

Tweedell proved up his homestead claim on June 24, 1910. and moved into Homestead in 1911.25J. U. Free sold his store opposite the Homestead F.E.C. depot to him in August of 1911 and Tweedell planned to erect a “large concrete store building and put in a full stock of goods.”26 On November 26, the Miami Herald reported that Tweedell had “opened his store with a stock of general merchandise.”27 In 1913, he rented the Hogard house on Mowry Street and moved in.28 He had been a qualified voter in Homestead before he rented the Hogard house, though, because he was one of the electors who voted to establish the town of Homestead in January of 1913. He was also elected, along with J. D. Redd, to serve as an alderman on first council of the Town of Homestead.29 In 1913, he oversaw the expenditure of an estimated $22,500 in County funds for the construction of roads in his district.30 Those roads were mostly built with convict labor.31 32

On August 29, 1913, he bought the “northwest half of lot 5 in block 11, of Homestead,”33 at the corner of Homestead Avenue and 2nd St., just a short distance from his store. The sellers were Fred S. Loomis and his wife, Jessie. It is unknown what, if anything, was built on this parcel.

In addition to having a store, living in Homestead, being a Town councilman and a County Commissioner, Tweedell farmed his land on Redland Road. In 1917, he grew tomatoes and bananas.34 Walter sold 60 acres of his homestead shortly after proving it up35 and more of it in November of 1920 to William Brodie.36

Walter was well-connected in town, as his wife and James D. Redd’s wife were cousins. It is not surprising to learn that Maisie was an early member of the Homestead Women’s Club. She was part of the group of women who served lunch to the crowds at the dedication of Royal Palm State Park in November of 1916.37 Her husband was a member of the South Dade Chamber of Commerce.38

Tweedell was a Town Councilman and a County Commissioner until he resigned immediately after his re-election in November of 192o due to his failing health. He was first reported ill in January of 1920.39 according to his obituary, Tweedell fell ill with influenza in the summer of 1920 and did not improve so on November 6, he went to Phoenix, Arizona, hoping to recover. Instead of improving, his health deteriorated further. In early May of 1921, his wife went to Phoenix and they traveled to Asheville, N. C., again in hopes of recovery. But he still didn’t improve so they came back to Homestead in mid-July.40

Like Rev. J. A. Kahl, very little was published regarding Tweedell’s health. He was present at all Town Council meetings during the summer of 1920 and also present at County Commission meetings. It is speculation, but it is likely that Tweedell had tuberculosis. Doctors of that time often prescribed dry climates, such as Arizona, for tubercular patients but that did not help Walter. There were a number of establishments in Asheville in 1921 that treated tubercular patients, so Asheville was a logical place to go when his stay in Phoenix didn’t help. But apparently, Walter’s case was too far advanced and nothing could be done for him.

Tweedell died on September 16, 1921 at his home in Homestead. He was 46.41 The services were conducted at the Methodist Church in Homestead and he was buried with Masonic honors in the Palms Woodlawn Cemetery in Naranja.

Tweedell had served continuously since November of 1912. Gov. Hardee appointed J. D. Redd to fill the vacancy caused by Tweedell’s resignation. Redd and Tweedell were “close friends”42 (their wives were cousins) so it is likely that Tweedell’s resignation was planned in advance, giving Redd an opportunity to be appointed. Redd received confirmation that he had been appointed to the vacant commission seat by Governor Hardee on January 15, 1921.43

History says, Don’t hope
on this side of the grave,
But then, once in a lifetime
The longed-for tidal wave
Of justice can rise up,
And hope and history rhyme.