↓
Home→Business→The Brookers of Homestead – Part I

Anyone who grew up in the Homestead area earlier than 1970 knew Henry Brooker, Jr. and the Brooker Lumber Company. His father, Henry Brooker, Sr., founded the company as the Homestead Lumber Co. In 1928, he turned the company over to his son, Henry, Jr.1 In the 1970s, Brooker’s was the only game in town when it came to building supplies. It also carried a small selection of household goods. Brooker’s was a hold-over from the days when general merchandise stores existed all across the country in the 19th and into the early part of the 20th century. Henry Brooker, Sr. had two brothers: Edward Franklin, and Thomas Potter. In this four-part article, I am going to write about the Brooker brothers’ parents in part I and Henry, Edward and Tom in parts II, III, and IV.

The Brooker brothers’ father was John L. Brooker, 24, who was married to Margaret, 18, with sons Henry, 4 and Eddie, 2, in the 1880 census of Palmetto, Manatee, Florida.2 Their mother was Margaret Mathis, who was born in Manatee County, Florida on April 15, 1859, the daughter of Mary Ann Williams and James Washington Mathis.

Margaret’s mother and father divorced shortly after she was born and her mother then married Edward Whidden on July 19, 1860 in Hillsborough County. Mary Ann, 25, her daughters Augusta, 14 and Margaret, 12, were enumerated in the 1870 census of Manatee County, Florida with her new husband, Edward, 26.3 Edward was a stock raiser and Mary Ann was keeping house. In the 1885 Florida Census, Edward Whidden, 40, and his wife, Mary, 38, were enumerated in Kissimmee, Brevard County, but no children were shown. Edward and Mary Ann Whidden next appeared, along with two of Mary’s grandchildren, Thomas Brooker and Cora Brannan, in the 1900 census of Jupiter.4 Cora was the daughter of Mary’s daughter Emily Augusta and her husband Eli Brannan. Edward’s occupation was “cowboy,” which is consistent with his occupation as a “stock raiser” in 1870 in Manatee County. In addition, Margie Miller, 46, who was the wife of Edward Miller but who was enumerated as a “step-daughter,” and Annie Randolph, an adopted daughter born in 1883, were living in the Whidden household. The identity of Annie Randolph is not known at this time.

James P. Miller married Mary A. Jamison on July 16, 1853 in Talbot County, Georgia.8 Their son Edward C., 25, was enumerated in Orange County, Florida in 1885. Edward’s father was a hotel keeper.9 After marrying Edward Miller in 1889, Margaret had two more children: Cecil Earl, born on 24 December 189410 and James Howard, born on 2 Nov 1904.11 Cecil and James were born in Jupiter. Cecil died in Jacksonville so the fact that there is an Edward Miller buried in the St. Augustine National Cemetery in Jacksonville likely means that the man was Cecil’s father.12

Edward C. Miller claimed a homestead in sections 25 and 36 of township 40 south, range 42 east in what was then Dade County but is now Palm Beach County, receiving his patent on May 17, 1905.13 His daughter-in-law, Lucille D. Cronk, also claimed a 160 acre homestead in section 36.14 This property was about two miles north of the town of Jupiter. In August of 1904, Edward Miller gave a $385 mortgage to Ida A. Ziegler for his property and his step-son, Thomas Brooker, gave a mortgage of $750 to the same woman for land in section 8, township 40 south, range 39 east.15

There is little doubt that Margaret’s sons by her first marriage lived with her new husband, Edward Miller, in Jupiter but no record exists of what they were doing. A clue might be the mention in The Gazetteer of October 24, 1894 that E. C. Miller, of Jupiter, established a butcher shop and oyster restaurant in one of the Livingston buildings.16 Their step-father’s occupation in 1900 was “farmer,”17 but occupations in the census are notoriously unreliable, particularly when the occupation given was “farmer.” No doubt the sons contributed to the household economy in the late 1880s and through the middle 1890s but by 1900 Henry and Edward were probably out on their own, as they were 23 and 21, respectively. Their brother, Thomas, was living with his grandparents, so he may or may not have been contributing to the Miller household.

In May of 1904, Henry Brooker was an inspector and E. C. Miller was the clerk of Precinct 2, Jupiter.18 E. C. Miller continued to appear as the inspector of Precinct 2 through June of 1906, the end of his term. Not long after that, Ed and Margaret moved to Miami because in 1907, he appeared on the delinquent tax list as the owner of lot 8, block 43, city of Miami, north.19 This property was on 4th St., just east of Avenue D and was close to the hotel he and and Margaret operated in 1910 on 6th Street near Avenue B.20 They were in Miami until at least late 1912, when T. P. Brooker and his wife “motored up from Homestead” to spend the night with his mother and step-father.21

Possibly desiring to be closer to Margaret’s first three children, who had filed claims for homesteads west of Detroit, Florida, Ed and Margaret moved to Detroit also. Some time between 1913 and 1915, Ed purchased 20 acres of land from the Model Land Co. – ten acres on the south side of Ohio Street (now Arthur Vining Davis Parkway) and ten acres on the north side. There, they built a house on the east side of the Dixie Highway, denoted as “Avenue B” on the plat below, which was the road from Homestead to Detroit at that time. 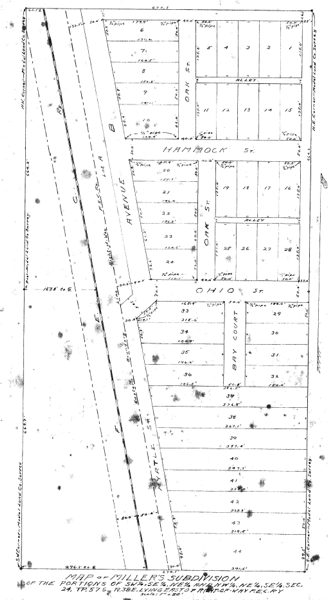 This plat was for the western half of the land owned by Miller. The eastern part, adjoining what would become Krome Avenue, was part of the marl prairie and suitable for pasture for the thoroughbred Jersey bull that Miller offered for stud service.22 No doubt, Miller and his family lived in a house built on the higher ground.23 His property came to be known as “Miller’s Hammock” and was incorporated in 1945 into the newly established Bryan H. Edwards Municipal Park.

Margaret Miller died on June 16, 1917. “Mrs E. C. Miller – Mrs. E. C. Miller of Homestead, at the age of 58, died at 2:10 yesterday afternoon after an illness of several weeks. Aside from her many friends in Miami and Homestead as well as other places, she leaves to mourn her loss her husband, E.C. Miller of Homestead; her mother, Mrs. Mary A. Whitten of Arcadia, Fla., five sons, Henry Brooker, Edward F. Brooker, Thomas P. Brooker, and Cecil E. Miller and James H. Miller of Homestead, and one daughter, Mrs. Blanche Rushing of New York City. The funeral will be held at the new Combs Chapel, 323 11th St., at 3:00 p.m. today, and the interment will be in Woodlawn Park Cemetery.”24

Following his wife’s death, Miller moved to Homestead, where he was enumerated in the 1920 census living between Benjamin King,25 son of William A. King and George M. Pinder. He had rented his house in Florida City to Mr. Niles, who had come from Perrine. Miller’s house had formerly been rented to H. C. Bagley.26

In 1940, he was living with his son, James H. on Lake Shore Drive in Canal Point in Palm Beach County.27 His son was the superintendent of a planing mill. A planing mill is where rough-sawn lumber is sent for finishing before it is sold.

Henry Flagler’s railroad had reached Miami in 1896 and Homestead in August of 1904. The economic impact of the railroad in the Jupiter area was no less than it was in Miami. All of the Brooker brothers worked for the Florida East Coast railroad. Ed was night operator in Jupiter but in 1906, he was sent to Homestead to become the station master.28 29 Henry followed his brother and worked out of Knight’s Key on the Extension’s telegraph lines. Tom was a fireman in Jupiter and came last, in 1910. 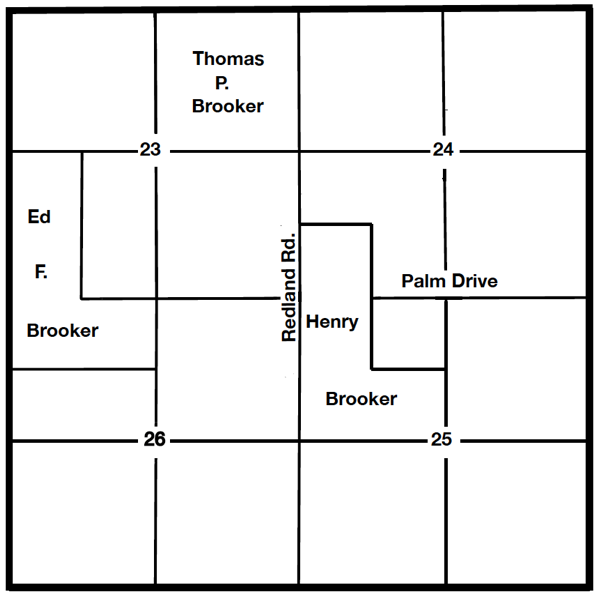 Location of the Brooker homestead claims west of Detroit

Henry Brooker married Grace Skill, the daughter of Charles W. Skill (1839-1914) and a sister of Frank L. Skill, who owned and operated the W. D. Horne Hardware Co. Frank’s wife, Pearl Turnage, was the sister of Carl Turnage, the photographer who owned Turnage Studio in Homestead.

Edward F. Brooker married Annie Almeda Johnson, whose grandfather, James Arango Armour, was the head keeper of the Jupiter lighthouse from 1868 to 1908.