↓
Home→Business→Rev. Joseph A. Kahl – Part I

When I first started writing articles for this website, I decided that I would explore the lives of people mentioned in early newspaper articles about Detroit, now known as Florida City. I subsequently posted essays on James M. Powers, William C. Norwood, the Brooker brothers, Bryan H. Edwards, and John and Florence Hunt. With this post, I’m going to switch to Homestead residents and explore the life of the Reverend Joseph Adolph Kahl. It is a fascinating story and one that I could not have written without the able assistance of Linda Bebee, a researcher in South Miami and Louise Kahl Young and Stephen Kahl, both of whom live in Texas. This post will be part of a series, because Joseph Kahl was a very important man in the early history of Homestead and he tragically lost his wife in 1913, barely two years after he moved to this area. The story cannot be told in one post because it would be too long. 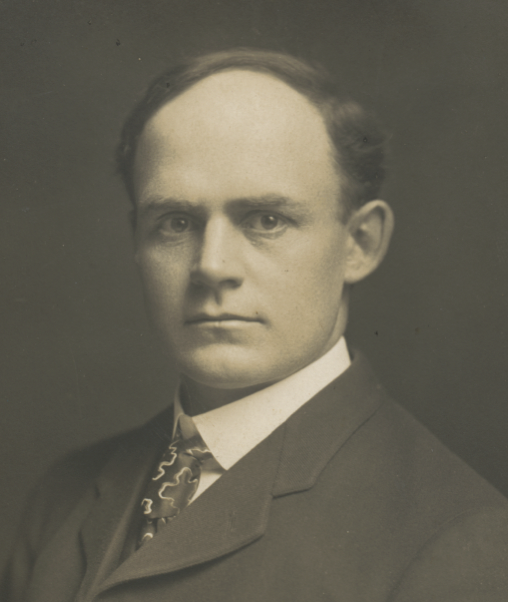 Reverend Joseph A. Kahl, circa 1900
Courtesy of Stephen M. Kahl

Joseph Kahl was born in Rock Island County, Illinois in March of 1871, according to the 1900 census. His death certificate, kindly furnished by Louise Kahl Young, states that he was born on May 12, 1871. He was one of eight children born to Detlief and Wilhelmina Kortrum Kahl. In 1876, when Joseph was just five years old, his mother died and his father re-married to Anna Tegtmeier on March 31, 1877. She brought three of her own children to the marriage and had three more with her new husband, creating a family of two adults and fourteen children.

After his first wife died, Detlief Kahl moved across the Mississippi River to Muscatine County, Iowa. From there, the family moved to Jasper County, where Joseph’s sister, Mary, was born. They then moved to Hardin County, where they settled down and stayed in Sherman Township. The Kahls must have been deeply religious because a Kahl family history states that their home was “the center of religious meetings and a place where traveling ministers would stay en route to their churches.” They must have also placed a high value on education because after Joseph completed his primary education he appeared in the 1900 census of St. Paul, Minnesota, living in the household of Emma Wenger, while he was attending school at Hamline University, a Methodist institution. In 1905, he appears on the Minnesota state census as a clergyman at Hamline University. At that time, he had lived in Minnesota for 9 years – since 1896. As he was 34, it appears that he had completed his seminary work and was a clergyman at the University, because that is what is listed as his occupation.

The Methodist Church sent Joseph to Driscoll, North Dakota, perhaps at his own request. George Kahl, one of Joseph’s brothers, had filed a claim in Burleigh County in 1903 and proved it up in 1908. In 1905, Joseph filed a claim on 160 acres, the N 1/2 of the SE 1/4 and the N 1/2 of the SW 1/4 of section 26 in T138N, R75W in Burleigh County and proved it up on May 2, 1910. A check of the Burleigh County newspapers in the period from 1905 to 1910 reveals a number of instances in which Joseph Kahl is mentioned. He was the pastor of the Methodist Church in McKenzie and preached in a number of other places in the county. On October 11, 1910, he participated in the Methodist Conference in Bismarck. There are no further mentions of Rev. Kahl after that date, so presumably he left for Florida after that date. The town of Driscoll, in Burleigh County, is an important location to keep in mind in this series on Joseph Kahl.

Now, I need to pick up the story of Harriet Mae Woodbury, the future wife of Joseph A. Kahl.

Harriet Mae Woodbury was born in an immigrant wagon on the banks of the Blue Earth River, near Blue Earth, Faribault County, Minnesota on November 1, 1876. Her parents were Charles H. Woodbury, Sr. (1850-1936) and Myra Maude Little (1856-1939). The family moved north, to McDonaldsville, Minnesota in 1880 and then to Ada, Minnesota. They then moved west to Forest River, North Dakota, before moving once again, south, to Abercrombie, North Dakota, about 190 miles east of Driscoll. Sometime between 1906 and 1907, they packed up and moved again, to Driscoll. While all this family moving was going on, Harriet was busy getting an education. She attended primary school in Grand Forks, North Dakota and then went to high school in Montpelier, Vermont, where her aunt, Mrs. C. A. Gale, lived. Finishing high school, she taught school in Abercrombie and Wahpeton in North Dakota. In 1903, she registered at the Still College of Osteopathy in Missouri and graduated in 1905. Somehow, she also found time to file a claim for a homestead on 160 acres in Burke County, North Dakota, way up in the northwest corner of the state, in 1906. There, for a period of time, she taught school in Portal, right on the border with Canada. She didn’t receive a patent on this property, though, as she abandoned the claim in less than a year, deciding instead to do post-graduate work in osteopathy in Los Angeles, California. In the fall of 1907, she returned to Driscoll to visit her parents, who had moved from Abercrombie and entered the hotel business. In an article which appeared in the December 11, 1907 issue of the Bismarck Daily Tribune, we read that “Dr. Harriet M. Woodbury, osteopath physician, is now located in her office at the Woodbury hotel. Dr. Woodbury comes here very highly recommended from Los Angeles, Cal., and Driscoll is to be congratulated in having so good a physician locate here.” On May 28, 1908, Dr. Harriet Woodbury was elected fourth vice-president of the Driscoll Epworth League. Her sister, Ellen A., wife of Irwin Roy Matthews, was elected secretary. The Epworth League was an organization for young people, ages 18-35, in the Methodist Church.

It is not unreasonable to conclude that she met Reverend Joseph A. Kahl through her activities in the Epworth League. On August 20, 1908 she and the Reverend were married. She was 32 and he was 37. 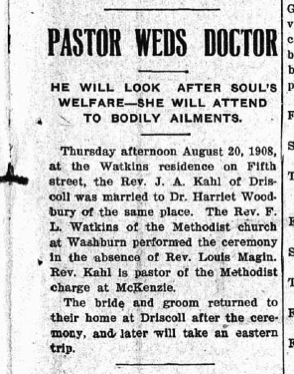