In part I of this series on the Reverend Joseph A. Kahl, I explored the early lives of Joseph and his future wife, Harriet Woodbury. I ended that post with their marriage, on August 20, 1908.

Reverend Kahl preached in Hunter and also in Arthur, another tiny town 5 miles south of Hunter. On May 17, 1910, Rev. Kahl and his wife welcomed the arrival of their daughter, Myoma.

As an adult, Myoma preferred to be called Irma and that is what is on her marker in Flagler Memorial Park in Miami.

While Reverend Kahl preached in Cass County, he made the acquaintance of Edward Mitchell, who was the editor and manager of the Hunter Herald. Mr. Mitchell will make another appearance later in this post. Rev. Kahl preached in Cass County until September of 1910, when the Church sent him to preach in Miami at the First Methodist Episcopal Church.1 In early 1911, he accepted the pastorate of the Park Temple Methodist Episcopal Church in Fort Lauderdale, Broward County, Florida. Reverend Kahl was there from early 1911 until early 1912, when he was sent to Homestead, perhaps to help the Reverend Joseph M. Cormack, who was experiencing personal difficulties.

While in Fort Lauderdale, Harriet, Joseph’s wife, became active in the Women’s Christian Temperance Union. Her membership in the society was noted in a July 8, 1911 society column by Virginia Craig, which appeared in The Miami Herald.

Upon his arrival in Homestead, Reverend Kahl promptly got to work establishing Homestead’s first newspaper, The South Florida Banner, the first edition of which was published on March 15, 1912. A short notice in the April 26, 1912 edition notes that he was living temporarily in Hardee’s house, east of the Sullivan Hotel. That was in the original town of Homestead, on the east side of the railroad tracks. The Sullivan Hotel was located on the corner of N.E. 1st Road and N.E. 1st Drive, east of Railroad (Flagler) Avenue. The location of Mr. Hardee’s house has not been determined. Montelus Clifton Hardee (1863 – 1956) was born in Mississippi and came to South Florida at an early date. He was a prominent tomato and fruit grower and owned packing houses in Dade and Broward Counties. His packing house in Homestead sat perpendicular to the railroad tracks on the west side of the Homestead Depot. In 1924, he was the president of Hardee & Gentile, Inc. and lived at 1756 N. Bayshore Drive in Miami. In the 1930 census, that house was valued at $35,000, a substantial amount of money at that time.

On May 10, 1912, Kahl’s wife, Harriet, and their daughter Myoma came down from Fort Lauderdale to join him.

The South Florida Banner was owned and edited by Rev. Kahl, but it was printed on the presses of The Tropical Sun in West Palm Beach. The Tropical Sun was owned by Guy Metcalf and his paper was Dade County’s only newspaper until the Miami Metropolis published its first edition on May 15, 1896. Metcalf was a mayor of West Palm Beach, a prime mover in creating Broward County out of Dade County in 1909, a real estate speculator and an early school superintendent. The fact that The South Florida Banner was printed in West Palm Beach led to occasional delays in the copies being delivered to Homestead and to proofs not being delivered to the presses on time, via Flagler’s railroad, so that issues missed being printed. It also led to charges by Alexander C. Graw, the owner of The Homestead Enterprise, the successor to The South Florida Banner, that it was published in “a shack.” That was not true – the Banner was located in a small building at 17 West Mowry, just west of the Homestead Mercantile building. 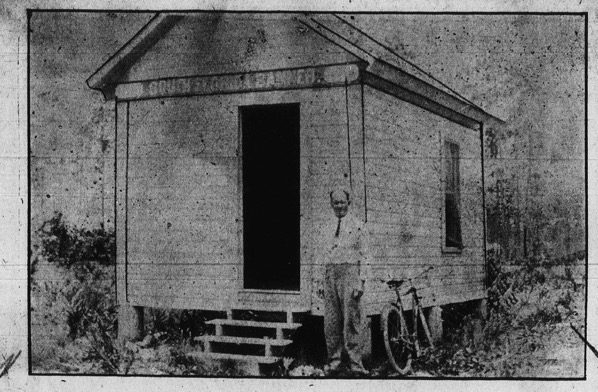 Rev. Kahl Standing by his Office2

Jean Taylor wrote that Kahl’s newspaper “gave priority to church news.”3 I read all of the extant issues of The South Florida Banner on microfilm and I have to disagree. Rev. Kahl covered much more than church activities. Churches were very important social institutions in early Homestead, so Kahl did publish items of a religious nature. Rev. Kahl published the times when he preached at the churches on his circuit and he covered the construction of the First Baptist Church in Homestead on several occasions. But he published no sermons from local preachers nor did he publicize any churches other than the Methodist and Baptist denominations. While he was the editor, Kahl publicized the comings and goings of important and not-so-important people, covered business news in great detail and used his paper to push initiatives to build a new school (now Neva King Cooper, completed in January, 1914), establish a municipal light plant, pass a sanitary ordinance, publicize the accomplishments of the Homestead Circle (the predecessor of the Homestead Women’s Club – Harriet was a founding member) and covered news in Detroit, Longview, Redland, Silver Palm and Princeton. He was also responsible for the fact that Krome Avenue north of Mowry is wider than it is south of Mowry. When the owners of The Homestead Mercantile were building their new store in late 1912, Rev. Kahl persuaded them to dedicate an additional 15′ as right-of-way for Krome Avenue. When the Commerce Addition, on the east side of Krome, was platted in September of 1914, an identical right-of-way was dedicated, thus making Krome Avenue 80′ wide north of Mowry and 50′ wide south of Mowry. Kahl also used his bully pulpit to fulminate against the lack of landscaping near the Depot, which he thought, correctly, made Homestead unappealing to visitors and travelers on their way to Key West. Reverend Kahl was a fierce critic of alcohol consumption and Harriet was a founder of the local chapter of the Women’s Christian Temperance Union. Those views naturally found their way into the paper. Rev. Kahl and his wife were responsible for creating the first lending library in Homestead, some years before Lily Lawrence Bow became known for her role in establishing a library in Homestead. In addition to local news, Rev. Kahl published state, national and international news. He covered much more than church news and the surviving issues of The South Florida Banner are likely one of the few sources extant for learning more about what this area was like from 1912 to 1914. Because Kahl was a preacher as well as the editor of the paper, he commanded a great deal of respect and played an important role in early Homestead, a role that was at least as important as those played by W. D. Horne, J. D. Redd, S. E. Livingston, Russell F. Tatum, and Henry Brooker, other names frequently mentioned as “founders” of Homestead. Rev. Kahl presided over the meeting in which the Town of Homestead was incorporated in 1913, so the fact that not much has been published about him is regrettable.

In October of 1913, tragedy struck the Kahls when Harriet died from complications from childbirth. The circumstances of the tragedy had been guessed at by various authors over the years, but it wasn’t until Dr. Greg Bush, a professor at the University of Miami, uncovered a manuscript written in 1938 by WPA authors Mary Ferrell Dickinson and Gladys Buck at the Florida State Archives4 that the details emerged. Jane Tower, the wife of Dr. John Tower, recounted the tale of why Harriet died. In late September, Harriet gave birth to an infant which died upon delivery. Harriet’s situation, as was not uncommon among women experiencing complications resulting from childbirth in those days, worsened in the days that followed. Dr. Tower was the physician in charge and, when it became apparent that surgery was necessary on October 10, he called Dr. John Dennis in Modello for assistance. Another operation became necessary two days later, in which Dr. B. F. Forrest, the mayor of Detroit, assisted. But their efforts were of no avail and Harriet died early in the morning of October 13 due to complications from the childbirth. She was only 37 years old. Mrs. Tower stated that Harriet’s death was the event that motivated her husband to persuade Florence Hunt to move her hospital from Florida City to Homestead. That took six years, but in September of 1919, Florence opened her maternity hospital in Homestead.

The outpouring of grief in the community was remarkable and the complete memorial service, given by Dr. P. S. Merrill, pastor of the First Methodist Church in Miami, was published in the newspaper. The service was held at the First Baptist Church in Homestead. On January 30, 1915, more than a year after her death, she was remembered by the W.C.T.U. in a memorial service held at the Redland Methodist Episcopal Church.

The pall bearers were Sidney E. Livingston, S. T. Parker, Edward C. Loveland, C. H. Miller, Wilmer H. Cast and Earl Hair. Harriet is buried in an unmarked grave in the Woodbury plot at Naranja. The grave may have had a marker at one time, but it does not have one now.

After Harriet’s death, Rev. Kahl and his daughter, Myoma, continued to live in the house that was built for them in 1912 by carpenters from Detroit.5

The South Florida Banner grew substantially during its ownership by Kahl – he beat the drum ceaselessly for additional subscriptions. By late 1913, if a reader thought that the paper was going bankrupt, as other published accounts about the paper read, that reader would think it was so, for Kahl was pleading desperately for more subscriptions. But the reason he was doing so was because he had plans to expand his operations and create a job printing plant so that the paper could be printed locally and also so that other printing jobs could be undertaken. Kahl purchased two lots “just west of where the Banner office is now located” and let a contract to J. U. Free, who built a 24 x 50 foot building with a concrete floor to house the printing plant and a Cottrell printing press which was purchased from the Keystone Type Foundry in Atlanta, Georgia.6 In April of 1921, this building was expanded to 40 x 65 feet.7 The front of the building was stuccoed in January of 1925.8

George T. Rice was hired to be the foreman. He had published a newspaper in South Carolina for a number of years.9 On February 13, 1914,10 Kahl announced the stunning news that he had sold a 50% interest in the paper to Ed Mitchell, of North Dakota. Mitchell would be the business manager of the paper while Kahl would retain the editorship of the paper. L. D. Cook, a friend of Mitchell’s from North Dakota, would be the salesman while Guy E. Mitchell, Ed’s nephew, would be the printer. The paper seemed to have a bright future and several lavish editions were published in the summer of 1914.11 Unfortunately, many issues of The Homestead Enterprise (the name of the paper changed with the issue of March 26, 1914) published in the first half of 1914 have not survived. Only two of those bonus editions are extant. The others, which were supposed to have “more than a hundred biographies of those who made the Redland district” have been lost. In the final part of this series, the complicated story of the difficult transition to new ownership of the newspaper will be told.

History, despite its wrenching pain, cannot be unlived, but if faced with courage, need not be lived again.