In part II of this series, I wrote an account of Rev. Joseph and Mrs. Harriet Woodbury Kahl’s life from their first pastorate in Hunter, Cass County, North Dakota down to Homestead, Florida. In that article, I covered his journey from Hunter to Miami to Fort Lauderdale and finally to Homestead. There, in addition to his preaching about temperance, he started publishing The South Florida Banner, Homestead’s first newspaper. The first edition, of eight pages, was published on March 15, 1912. In that article, I corrected the historical record about how Harriet Woodbury, Kahl’s wife, died and ended the essay with an account of Rev. Kahl’s plans for the newspaper in 1914.

Rev. Kahl was a Methodist minister, not a businessman. Yet, he founded a newspaper and surmounted numerous obstacles to create a successful business. His first problem was to find someone to print the paper. Logically, he would have gone to S. Bobo Dean’s The Miami Metropolis but for some reason, either cost or lack of capacity, he was unable to get his paper printed there. Instead, he traveled all the way to West Palm Beach on his motorcycle, where he arranged1 with Guy Metcalf, the owner and publisher of The Tropical Sun, to print his fledgling newspaper. Metcalf’s publication was Dade County’s first newspaper, established in 1886.2 His second problem was marketing but he knew a lot of people because of his fiery speeches on the evils of alcohol and because of his wife’s activities in the Women’s Christian Temperance Union.3 It helped that his printer was also a real estate speculator who had purchased section 16 (the school section) adjacent to the soon-to-be Royal Palm State Park, southwest of Homestead4 and was vigorously promoting the sale of that land. By 1912, the Redland District was the center of feverish real estate speculation, the homesteaders having sold off substantial portions of their patented claims to men and women from all over the United States. News of the area had been widely promoted before Kahl established his paper by The Miami Metropolis, The Miami Herald, The Florida City News, The Detroit News, national newspapers and the Miami Land & Development Company, which founded the city now known as Florida City. Unfortunately, there are no known extant issues of The Florida City News or The Detroit News.

Kahl’s newspaper featured advertisements from both local and Miami businesses, but he struggled to pay his bills. In late 1913, he enlisted the help of Ed Mitchell, the publisher of The Hunter Herald in Cass County, North Dakota.5 Mitchell had come down to the Miami area as early as February, 1911, when he and some relatives were shown land by the Richardson-Kellett Real Estate Co.6 Kahl most likely knew Ed from the time he was preaching in Hunter in 1910. On February 13, 1914, Kahl announced that he had sold a 50% interest in the newspaper to Mr. Mitchell.7 He had previously announced other substantial changes to the paper, including a new building and equipment.8 Up until March 20, 1914, the newspaper had only listed J. A. Kahl as publisher and editor. With the March 26, 1914 issue of the paper, that changed to J. A. Kahl, publisher and editor and Ed Mitchell, business manager. In addition, the newspaper name was changed to The Homestead Enterprise and it was now published by The Homestead Publishing Co.

Kahl’s ambitions for his newspaper had always been greater than his financial ability to deliver. With the construction of a new building and the purchase of printing presses in the fall of 1913, his bills started to mount and the first signs of financial stress soon appeared. The first evidence of that was a writ of replevin9 filed by the Underwriter Typewriter Co. in May of 1914.10 That matter was apparently resolved, but because there are only four surviving issues of The Homestead Enterprise for 1914 after the first issue of March 26, it is impossible to determine how rapidly Kahl’s financial difficulties increased.

In addition to mounting financial troubles, Kahl’s health was apparently deteriorating. He may have suffered from high blood pressure. Starting in early January of 1915, three new developments give us a hint of Kahl’s health issues.

Rev. Kahl attended the annual Methodist Conference in Tarpon Springs, FL during the week of January 11, 1915. At that meeting, he asked to be relieved of his duties as a pastor and to be placed in a supernumerary position. His request was granted and when he returned to Homestead on the 19th, he published an editorial in the January 21 issue that stated he had been doing “double duty in the past two years” and that it was “impossible to do justice to both church and the paper since both had grown to such proportions that each demands the undivided attention of a man.”11

Medical matters are always very private and Rev. Kahl wrote nothing about his health until he was forced to do so. As his health worsened, though, he enlisted the aid of his brother, R. George Kahl, who arrived in Homestead in the early summer of 1914 to help him on the paper. George’s daughter Alice was appointed assistant principal at the Redland school in August of 1914.12 George traveled to Miami on business matters13 for the Enterprise and helped manage the paper while his brother was sick.14 He also purchased 10 acres of land from a homesteader, Theodore R. Kuntz, in early 1915, apparently planning to stay.15 Theodore Kuntz had been the director of a dynamite factory in Schleslen, Germany before emigrating to this country and becoming friends with Otto Froreip, another early homesteader.16 George joined the citrus canker inspection force in early March17 but resigned in May to put “his time to good advantage on the Enterprise.”18

On February 16, 1915, Alexander C. Graw, with his wife and family, moored their 46′ yacht, the Isabel, near the Florida City Pavilion on the canal just east of what would become Krome Avenue.19 Graw was a wealthy publisher and editor from Philadelphia who had been the editor of the magazine New Jersey Resorts and Realty for over ten years. He was very familiar with resorts all along the east coast of the United States and had spent a considerable amount of time in his yacht cruising to resorts from Delaware to Long Island. He had spent six months on his trip down to Florida, stopping at all of the “chief resorts” on the way.20 Graw had spent time in Miami, visiting the Ocean Beach Realty Company’s property on Miami Beach and no doubt was very aware of the money to be made in real estate.21 After arriving in Florida City, he wasted no time before making the acquaintance of Rev. Kahl, with whom he shared a passion for the temperance movement and who was also a Methodist. He wrote two lengthy articles about the attractions of Miami and Dade County for the Enterprise which were published on May 13 and 20, 1915. 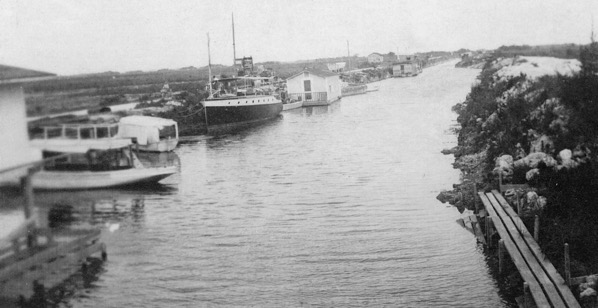 A yacht moored in the Florida City Canal, possibly the Isabel
Courtesy of the Florida Pioneer Museum

In addition to his health issues, Kahl was hit with another lawsuit in May of 1915 by Guy Metcalf’s newspaper, The Tropical Sun. Metcalf sued for $2,000 assumpsit damages because he had not been paid for printing Kahl’s newspaper.22 That case was resolved on January 14, 1916, when neither Kahl nor his attorney appeared in court in Miami. Metcalf was awarded $833.50 for his printing work and $95.82 in interest.23

Meanwhile, Ed Mitchell had become friends with Frank Bartmes, Homestead’s second mayor. Bartmes had purchased Sistrunk Hall24 in August of 191425 and had hired Ed Mitchell to manage the movie theatre in the building. Ed had lived in Homestead since mid-1913 and had been a member of the Redland District Band, which performed at the first Redland May Day Festival on May 1, 1914.26 In August of 1914, Ed had purchased William Hogard’s house on Church Street, near the First Baptist Church27 in the Hogard Addition to Homestead and it seemed that he was going to become a permanent resident. However, by May of 1915, Ed had moved to Fort Lauderdale,28 along with Frank Bartmes,29 who resigned as Homestead’s mayor, to manage Frank’s motion picture business there. Since there are so few surviving issues of The Homestead Enterprise for 1914, it is impossible to determine the details of what happened.

In the first four months of 1915, Kahl was apparently reasonably healthy – he visited Longview and also went to Miami, attending to business. Late in June, though, he took a turn for the worse, not being able to go to the office.30

Kahl’s health steadily worsened. On July 15, 1915, he published a notice dated July 10 in the paper stating that due to “continued ill-health,” he was “compelled to relinquish the management of the Homestead Enterprise, the same to take effect July 12, 1915.31 In that notice, he stated that A. C. Graw was going to take over management of the paper. A “friendly meeting” of Kahl’s creditors was held in the office of the Enterprise the evening of July 20 and there was a discussion about forming a new publishing company.32 A. C. Graw, Edwin Nelson and Irwin R. Matthews, a brother-in-law of Kahl’s, formed a stock company and applied for Letters Patent for The Homestead Publishing Company on January 6, 1916.

George Kahl, possibly concluding that there was nothing more that he could do for his brother, left Homestead for Coronation, Alberta, Canada to manage a lumber yard on July 2033, leaving his daughters, Alice and Lillian, in Homestead. Alice was a school teacher and Lillian gave private music lessons.

Sometime prior to November 4, 1915, Ed Mitchell filed suit against Kahl and the newspaper was sold to Edwin Nelson on the Dade County Courthouse steps on December 6, 1915 for $480.34 Edwin Nelson was a wealthy businessman who came to Miami in 1896 and was the president of the Dade County Securities Company, which specialized in mortgages and bonds.35 His sister, Clara, was the wife of Perry C. Hainlin, for whose family Hainlin Mill Drive is named. At about the same time, the Bank of Homestead filed a foreclosure suit against Kahl’s property in Homestead. The tax certificate was purchased by the Sun Land Company in Miami and redeemed in December of 1918.36

On November 25, 1915, the Homestead Enterprise reported that Kahl had suffered “a stroke of paralysis” on the previous Saturday (November 20) and that Dr. Tower was doing everything possible to make him comfortable. By January 20, 1916, he had recovered sufficiently to be able to leave by train for his parents’ home in Iowa.37

Rev. Joseph A. Kahl left Homestead a broken man, emotionally, physically and financially. He had lost his wife, his health and his business in less than two years. He left his daughter Myoma, not yet 5 years old, in the care of his deceased wife’s parents, Charles and Myra Woodbury. A short note appeared on the front page of the December 5, 1918 issue of The Homestead Enterprise stating that Rev. Kahl passed away peacefully at his brother’s house in Germania, Iowa38 on November 7, 1918. The information came via Irwin R. Matthews, his brother-in-law, and an obituary was to be published when more details became available. That obituary was never printed. Rev. Joseph A. Kahl has not been treated kindly by history, for no one has ever acknowledged the important role he played in the early history of this area. It is my hope that this series of articles will serve to correct that oversight.
______________________________________________________________

History says, Don’t hope
on this side of the grave,
But then, once in a lifetime
The longed-for tidal wave
Of justice can rise up,
And hope and history rhyme.