Jean Taylor, in her book, The Villages of South Dade, wrote the following account of how William D. Horne came to Homestead:

“William D. Horne delivered ice, worked in a grocery, and by 1904, owned his own home and a bicycle and grocery store. When he heard about the new town of Homestead being opened by the Florida East Coast Railway, he approached them about opening a store for the workers and a boarding house for the occasional visitor. The railroad thought it an excellent idea. W. D. Horne then sold his home, store and bicycle shop and took Ida for a vacation at the World’s Fair in St. Louis. Neither of them had been out of the state before. They had a wonderful time and talked about the trip for years.

“Mr. Horne made his way to Homestead by bicycle and chose two lots from a map furnished by the Model Land Company near the depot. He and two friends built a store with living quarters above. Materials were brought down by the railroad, the first shipment of anything other than railway supplies.”1

William Dixon Horne was born on January 20, 1875 in Eridu,2 Taylor County, Florida, the son of Josiah Warren and Sarah A. Vann Horne. Living close by were Emory and Frances Vann, his mother’s parents. Not far away were Thomas J. and Martha Mathers, the parents of Amanda E., Robert J. and John R. Mathers. Amanda married Thomas Alexander Campbell, Robert J. married Mary Alice Campbell, a sister of Thomas and John R. married Rebecca F. Horne, a sister of William D. In the 1880 census, at the age of 5, he was living with his parents in Taylor County.

Kinship ties were very important in the settlement of South Dade. The Horne, Vann, Mathers and Campbell families were tied together through marriage:

The Vann, Horne, Mathers and Campbell family members came to this area to better themselves, like many others. The Taylor County News published a report on February 22, 1945 that was written by James H. Wentworth in 1873 about Taylor County and read by him to the Rotary Club in Perry. In that report, Wentworth wrote that the “inhabitants are nearly all poor and it takes about all they can do to make a living…”3

The first known member of these families to leave the Taylor County area was Thomas A. Campbell, who, with his wife Amanda Mathers, was enumerated in City Point, Brevard County in 1900. They had likely moved there in the mid 1880s, joining his brother-in-law, John Reid Mathers and his wife, the former Rebecca Horne.4

Robert J. Mathers, who married Mary Alice Campbell, a sister of Thomas A. Campbell, moved to Eau Gallie, about 20 miles south of City Point. He and Dr. Eugene Brainard came down to Miami in September of 1897 to look for business opportunities.5 In early October, Julia Tuttle sold Mathers lots 9 and 10 in block 22 of the City of Miami.6 These lots are on the south side of N.E. 10th St. between N. Miami Avenue and N.E. 1st Avenue. His brother John opened a mercantile store at 123 Avenue D, now the northwest corner of North Miami Avenue and N. 10th St., in 1901.7 8 John’s stay in Miami was not long – he was stricken from the list of registered voters in the City of Miami in September of 1903.9 He moved back to Eau Gallie where he accumulated a fortune and built the Mathers Bridge.

The United States declared war on Spain on April 21, 1898 and R. J. Mathers was likely in a position to profit from that conflict as he had built a mercantile store on his lots. According to Paul George, Camp Miami,10 where soldiers who were to be sent to Cuba were billeted, was located just south of Mathers’ store. 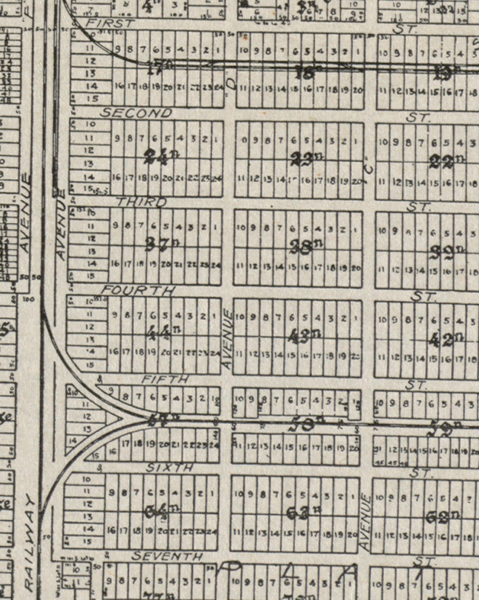 The first appearance of Will Horne in Miami was when it was noted in The Miami Metropolis that he had purchased lots 3 and 4 of block 24 in the City of Miami in 1900.11 He and his wife, Ida Virginia Campbell, had gotten married in Harmony, Madison County, Florida on February 4, 1900 but it is likely that he had been in Miami before then if he then purchased two building lots 3 months later. W. D. built his house on one of these lots. A notice in the newspaper on October 11, 1901 advertised a lot for sale next to the home of W. D. Horn.12 He did not dispose of these lots until October of 1912, when he sold them to Benjamin A. Lowe, a grocer.13 In May of 1901, Robert Mathers sold his business to A. J. Campbell and W. D. Horne.14 A. J. Campbell was Archibald James Campbell, the son of Thomas A. Campbell, and a brother of Horne’s wife, Ida Virginia. Will was probably in Miami before 1900, because his sister, Rebecca, was married to John R. Mathers and it is very likely that John and Rebecca visited his brother Robert in Miami. It may have been because of those visits that Rebecca’s brother decided to settle in Miami.

In August of 1902, A. J. Campbell left the business15 and shortly thereafter, W. D. left also,16 having sold the business to Charles H. and Frank Gautier.17 Charles was a grocery merchant in Miami and was the brother of Frank, who was a traveling salesman for a wholesale grocery company in Jacksonville. There is no newspaper documentation of Horne in the Miami Metropolis from October of 1902 until September of 1905.18 However, the Miami Evening Record published an advertisement for the Horn & Campbell Store, at the corner of Avenue D and 2nd Street, on January 1, 1904. That business dealt in “dry goods, notions, clothing, hats, novelties” and made “a specialty of fine shoes for men, women and children.”19 It may be that Charles and Frank Gautier sold the business back to Horne & Campbell after a short period of time and opened up their own grocery store, Gautier Bros., on a corner of the same intersection, because an advertisement in the Miami Evening Record advertising that business appeared on January 2, 1904. Advertisements for Horn & Campbell continued well into 1904 but in October of that year, the name of the business changed to Campbell & Campbell, successors to Horn & Campbell.20 Will came to Homestead in October, but it was not likely his first trip down.

Will Horne did well in business – he had enough money to visit the World’s Fair in St. Louis, Missouri in early July, 1904. He may have gone with his brother-in-law, Robert J. Mathers, who was also doing quite well. Mathers took a 7-week-long vacation trip to St. Louis, Atlanta, and West Florida.21

Robert J. Mathers was elected to the city council in Miami in September of 1900,22 so he knew the movers and shakers in the area. It is very unlikely that W. D. was not included in social affairs in Miami. On August 21, 1905, in a front-page article in The Miami Metropolis, it was noted that the Florida East Coast Railway had spent $47,465.68 for supplies in the Miami area in the last three months. R. J. Mathers was among the men and businesses mentioned. Mathers established the Diamond Furniture Co. at 938 N. Miami Avenue in 1911 and it was incorporated in 1915. The business occupied a two-story building and had 20,000 square feet of floor space.23 R. J. was a wealthy and influential businessman.

Will Horne had probably been in Miami since before 1900, so he was well aware of the plans and activities of the Florida East Coast Railway. Jean Taylor wrote that “Mr. Horne made his way to Homestead by bicycle and chose two lots from a map furnished by the Model Land Company near the depot.”24 The map was the plat of the Town of Homestead, which was laid out by John S. Frederick in June of 1904.25 It was not possible for anyone to travel to Homestead on a bicycle in 1904. He could have walked (or ridden his bicycle when possible) on the railroad right-of-way but given his social connections, it is more likely that he came down on the train. By November 19, the F. E. C. was running three trains a week to the Homestead country for the benefit of prospectors and shippers along the route.”26 It is also very likely that he was backed by capital from Miami – he was only 30 years old in 1905, after all. Taylor, who rarely cited her sources, likely copied the story about Will and his bicycle trip from an article published in Homestead Leader-Enterprise in 1956.27 The article, by an unknown author, does not quote Horne as stating that he came to Homestead by bicycle.

Taylor also wrote that Will “and two friends built a store with living quarters above. Materials were brought down by the railroad, the first shipment of anything other than railway supplies.”28 Charles T. McCrimmon had the contract with the F.E.C. to clear the railroad right-of-way and prepare the roadbed for the railroad track-laying machine and he had a portable sawmill that he used to mill the pine trees into lumber. The railroad also had been delivering fertilizer and providing access to markets to farmers all along the line from Miami since late 1903, as long as loading and unloading operations did not unduly delay the trains.29 30 In January in Perrine, McCrimmon was sawing 20,000 feet of lumber per day.31 By March of 1904, McCrimmon had finished the grading of the right-of-way for the extension down to Homestead.32 It is highly unlikely that W. D. Horne had lumber shipped from Miami to build his store – he likely used lumber milled in the immediate vicinity of Homestead.33