In the published histories of South Dade County, not much has been written about the women who claimed homesteads in the area. There were 46 women who claimed homesteads, 22 of whom fulfilled the legal requirements and patented their claims. Eleven women relinquished their claims, which were later picked up by male homesteaders and thirteen claims were canceled. The number of female homesteaders surprised me when I first started writing about history in South Dade. I was further surprised when I created a spreadsheet of homestead claims and discovered entries that were either canceled or relinquished, increasing the total number of claims by women.

In this article, I am going to focus on one of those women, Mrs. Ethel C. Booe, who homesteaded the land directly west of William J. Krome and north of Lily Lawrence Bow and Mahala A. McRae. Sarah J. Merck, Ethel’s mother, claimed a homestead on the south side of Avocado, next to Mahala McRae. 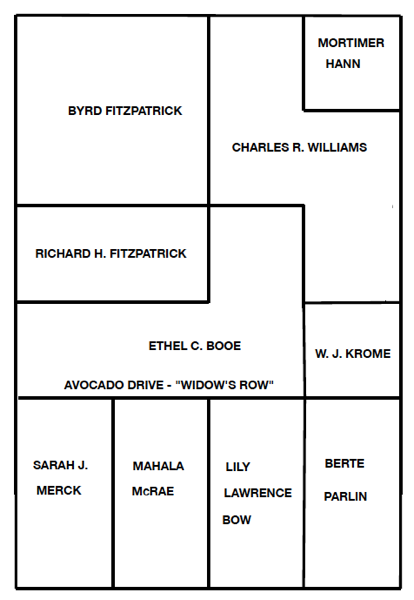 These homesteads were along both sides of Avocado Drive, which was given its name by Col. Hugh Johnston, the owner of Tropical Lodge, which was east of Krome Avenue on Avocado. In a few accounts, this part of Avocado Drive was called “Widow’s Row,” allegedly because the women who homesteaded there were widows. In addition to Booe, Merck, Bow and McRae, Martha Finch and Frances Lewis also claimed homesteads in the immediate vicinity. Those who are shown as “widows” in the documentary record were, quite often, divorcees. It was socially unacceptable in that era to be a divorcee, so often women stated that they were widows when in fact, they were divorcees.

A RARE CASE
“The editor had a pleasant interview the past week with Mrs. E. C. Booe, who had been visiting her brother, W. B. Merck, and was on her way to her home at Homestead and learned some curious but interesting facts about that section of our state.

“The first and most rare was that in her particular section, within a radius of one and one-half miles, there are and have been for some time living as many as sixteen widows, maiden ladies and young women looking out for their places with not single male member of a single family on the spot. They have their groves and raise vegetables to perfection on their own farms. She says she has as many as fifty varieties of fruit and that it is as healthy as it can be. The land is covered with a thick growth of pines that are from 75 to 100 feet tall.

“This season there were hundreds of acres planted to tomatoes from which a snug sum was realized by the truckers. Land is selling all the time and becoming more valuable. Mrs. Booe went there years ago and took up a homestead and is therefore on the ground floor with good prospects of realizing a good sum should she want to dispose of her 150 acres.

“Mrs. Booe was for a couple of years a resident of Ocala where, with her interesting little children, she made many friends. She conducted the Savoy and the Montezuma hotels during her stay here.”1

Lily Lawrence Bow was a divorcee, not a widow. Circumstantial evidence indicates that Ethel C. Booe was a divorcee, not a widow. Martha H. Finch was a widow and so was Mahala A. McRae, but Mahala was also the mother of Bird Fitzpatrick – she did not homestead without a support network. Martha Finch was from the same area of Michigan as Frances Lewis, Anna Longaker, Fred Loomis and Tom Evans, so even though she was a widow, she was not without local connections. Sarah J. Merck, Ethel’s mother, was a widow who relinquished her claim four years after filing. Frances Lewis was Annie Mayhew’s aunt and a confirmed spinster, not a widow. Only Ethel C. Booe came here from Ocala with no known local support network.

Ethel was born in June of 1870 in Gainesville, Hall County, Georgia, 50 miles northeast of Atlanta, the daughter of Elisha and Sarah J. Merck. She had an older brother, Walter, and they apparently decided to move to the booming town of Orlando in the mid-1880s. There, Ethel met and married Joseph D. Booe, who had claimed 80 acres of land as a homestead early in that decade and patented it in 1884. The 1880 census of Orlando enumerated him as a fruit grower but he was also an entrepreneur, as by 1887, he owned rental property on Pine Street in Orlando. 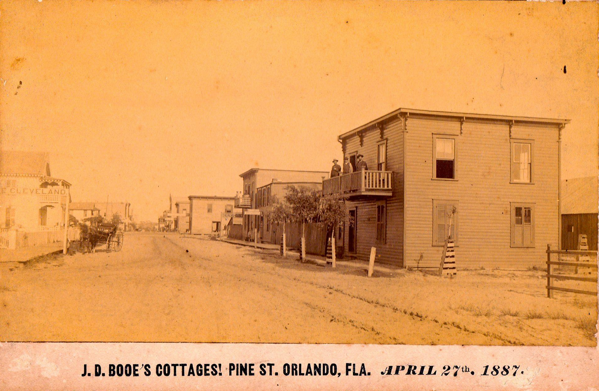 Joseph and Ethel’s first child, Cecil DeWitt Booe, was born in July of 1889 and their daughter, Mary Louise, was born on November 7, 1893. Both Joseph and Ethel were industrious and by the late 1890s, they managed the Magnolia Hotel, which was a short distance west of Orange Avenue,3 the main north-south avenue in Orlando at that time, on the north side of Pine. 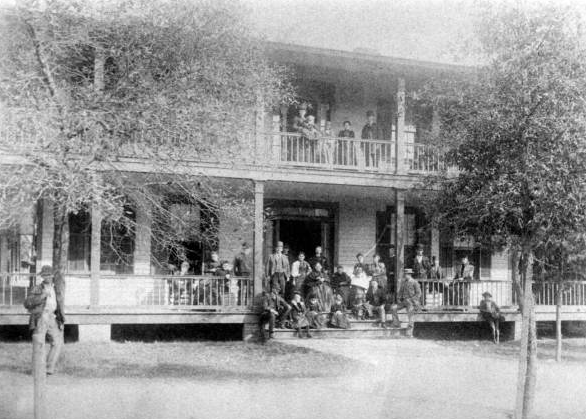 Joseph and Ethel’s marriage evidently ended sometime in 1901 or early 1902 because the name of the Magnolia Hotel changed to the Hotel LaCasa5 and Ethel moved to Ocala,6 where her brother Walter had established the Ocala Wagon Works.7 In Ocala, Ethel managed the Savoy Hotel for less than two months8 and then the Montezuma Hotel for a less than a year.9During this time, her brother Walter sold his business and moved to Eustis, in Lake County.10 The business community in that era was very fluid and dynamic – businesses opened, closed and changed ownership with astonishing rapidity.

The Great Freeze of 1894-1895, combined with the arrival of Flagler’s railroad in Miami in 1896, rearranged the agricultural landscape of Florida. Many growers who were wiped out by the 1894-95 freeze and another freeze in 1899 that gets little attention in the historical record11decided to move to the Miami area. As a result of these new arrivals in the Miami area, there was a lot of travel and communication between the Orlando/Ocala area and Miami. It is not known how Ethel made the decision to claim her homestead, which she named The Navajo,12 but that she did, on August 10, 1906, before Mahala McRae on January 8, 1907 or Lily Lawrence Bow on March 7, 1908.

Ethel’s son Cecil probably did not accompany his mother to this area as he graduated from high school about the same time his mother claimed her homestead and went off to college at Cumberland University, a Presbyterian institution in Lebanon, Tennessee, from which he graduated in 1910.13 There is no record of Ethel’s daughter, Mary Louise, attending the Homestead school, which was opened in 1906.14 In September of 1910, she was back in Ocala, where she attended high school.15

In a letter to the editor of The Ocala Evening Star, published on October 12, 1908, Ethel praised the Homestead area and noted that “the people are not the kind you generally find in new countries, but refined, educated and most of them with plenty of money and you would be surprised to see the number of people are who are wealthy.” Ethel had been welcomed by her neighbors when she arrived and complimented as a “fine musician.”16

It seems unlikely that Ethel spent a great deal of time on her homestead, as she kept up her ties with family and friends in Ocala and apparently traveled back and forth frequently. How she attempted to comply with the legal requirements for homesteading is unknown but she may have side-stepped those rules by paying cash for her homestead on March 18, 1911, five months before her five years was up. She had recently married into money, so it is possible that her new husband provided the funds. Her homestead was worth substantially more than she paid for it ($1.25/acre) and she more than recouped her investment by selling the northern 40 acres to David R. Leavens, of Ontario, Canada.17 Leavens contracted with Charles R. Williams, an adjacent homesteader, to clear the parcel of its pine trees and to plant a grove. Williams was killed on September 16, 1916 by members of the Rice gang south of Florida City after the gang robbed the Bank of Homestead on the 15th.18 In early 1912, Booe listed the remainder of her homestead for sale with the J. T. Wigginton Co. in Miami. Wigginton was another early homesteader who married the daughter of John S. Frederick. He had claimed his homestead in July of 1904, at the same time his father-in-law was laying out the Town of Homestead. Booe sold her homestead because she was “living in another part of the state and [could] not look after it.”19

Ethel married Benjamin H. Seymour, a wealthy businessman and real estate speculator in Ocala at the home of her sister, Eula Merck Wiley, in Jacksonville on August 18, 1910. His first wife, Necia, had died the previous October. B. H. Seymour was familiar with real estate in Miami and points south, having traveled as far south as Knight’s Key on the Key West Extension in 1910.20 It is unlikely that this was Benjamin’s first trip to the area – he may have been one of many in the Ocala area who touted the possibilities of the “Homestead Country” which convinced Ethel to claim a homestead.

Benjamin H. Seymour was the first cousin of two other Seymours in Dade County. John T. Seymour owned, with George Zapf, the Seymour-Zapf sawmill near Anderson’s corner in 1906.21 Robert H. Seymour was the census enumerator for the Florida census of Dade County in 190522 and a prominent Miami attorney. Robert and John T. Seymour were the sons of John W. and Martha A. Seymour and Benjamin was the son of William and Asenath A. Lyle. John W. and William were brothers – the sons of Elihu and Martha Adare Seymour, thus making Ben, Robert and John first cousins.

After Ethel sold the balance of her homestead claim in 1912, she was not often mentioned in the Homestead newspapers. When she came to visit, it was to see Cora Clark Brewer, the wife of Thomas Brewer, the first County commissioner from the Homestead area. Cora was from Okahumpka in Lake County and must have been a good friend of Ethel’s. One of the last records of Ethel visiting this area was in 1923,23 when she and her children visited with the Brewers and also with Virgil M. Grennell and his family. At that time, Ethel was divorced – she had reclaimed her previous married name of Booe.

Benjamin H. Seymour married, for the third time, Blanche Smith of Tarpon Springs, Florida on January 19, 1924. Ethel, a divorcee once again, moved to Corpus Christi, Texas, to be with her son and daughter. She died there on May 1, 1931 at the age of 58. Her gravestone gives her name as Ethel C. Booe but her death certificate names her as Ethel C. Merck Seymour.

The written histories of this area are incomplete because they give no information about those who left and thus leave the reader with the impression that everyone in South Dade County was one big happy family which enjoyed regular get-togethers at the Guild Hall in Redland and at the homes of other pioneers. Nothing could be further from the truth. People came here, cut down the virgin pine forests, planted groves and sold out for a hefty profit after only being here for a few years. Ethel Booe, as well as all those mentioned in my article on William Wirt Culbertson, furnish proof of that assertion. There were get-togethers, to be sure, but no long-lasting community bonds were ever created. The early days of South Dade County did not differ in any respect from the settlement of any other location in the United States. Pioneer life in this area was all about extracting as much wealth from the wilderness (timber, game and the destruction of entire ecosystems for agricultural purposes) as possible while profiting off the labor of people lower on the social ladder. What is different is that not enough families have stayed here over a long enough period of time to create an appreciation of and desire to celebrate and share the history of this area.
______________________________________________________________

History is never antiquated, because humanity is always fundamentally the same.