The following article, by Lilburn R. Nixon, appeared in the Homestead Enterprise on September 26, 1918. In March of 1902, Nixon claimed John Brinzel’s relinquishment of his homestead, which ran south and west from the intersection of Newton Rd. and Silver Palm. Later, he sold the corner 5 acres to Will Anderson, who built and operated his general merchandise store, known as Anderson’s Corner, for a number of years. Nixon was a member of William J. Krome’s Cape Sable Exploration survey, which took place from December of 1902 until June of 1903. The survey was ordered by Henry Flagler in an attempt to find the most economical route to Key West.

In Miami in 1902, Avenue C was east 1st Avenue, Avenue D was Miami Avenue, and Twelfth was Flagler. The city was much larger than what Nixon describes it as. Passenger service on the F.E.C. Railway began to Miami on April 22, 1896 and the city was incorporated on July 28th with 502 voters. The soldiers who fought in the Spanish-American War had used the city as a staging point and there were over two thousand residents by 1902. The court house was on 13th street, not on the river, and it was not completed until late in 1903 or early in 1904. There was not, as yet, a bridge across the Miami River, but the area on the south side of the river was settled, too.

The Gossman homesteads were on the east side of Tennessee Rd., between Coconut Palm and Silver Palm Drives. Dan Roberts had homesteaded in 1898 at Redland and Coconut Palm. “Krome’s corner” was the intersection of Avocado and Krome.

Work on the Key West Extension commenced in Homestead in April of 1905.

Modello, named for the Model Land Company, was at the intersection of Biscayne Drive and U. S. 1.

It is very interesting to note that in the space of just 16 years (1902 – 1918), almost all of the deer and other wild animals had been killed off. “Hunters” were arrested for baiting quail with corn in the 1960s but I haven’t seen one since maybe the mid-1970s. 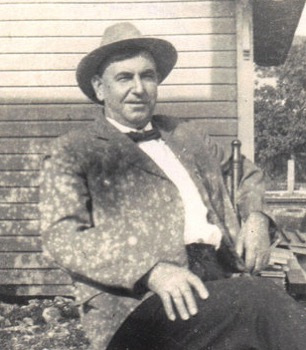 I am a native of Adair county, Mo., where my folks are among the earliest settlers in that part of the state. I came to Florida in 1884 and settled in Marion county where I engaged in farming and grove planting, but the big freezes in 1894-5 killed off all our trees and after working at other things for a while, I decided to go south to Dade county. Migrated to Dade county in 1902 and when I reached Miami I found it to be a very small settlement indeed. As I remember it Budge’s store at Avenue D and Twelfth and the drug store at Avenue C and Twelfth were all the stores there were on the north side. On the south side Sewell had his store and there were a few others at the time, but they were very scarce. After the railroad came and the town was surveyed it grew very rapidly. Mr. Frohock was sheriff then and the jail was located at Avenue D and the river, the court house being in the same place.

After leaving Miami our journey was continued in a wagon, C. A. Gossman’s place being our destination. The “road” was nothing more or less than a trail and it was far more comfortable to walk than to ride. When I got to what is now known as Silver Palm I found Charles and Henry Gossman and C. W. Hill there with their families, while Dan Roberts and Claude Jenkins, who were also there, were keeping “bachelors’ hall.” The country looked good to me and I bought the old abandoned claim of Mr. Brinsell (said to be the oldest settler in this section) for $75 and proved it up. We lived here about four years before moving to near Krome’s Corner.

The first thing I did after reaching the Homestead section was to put out a grove of about 35 acres for W. J. Krome, at Krome’s corner. I planted a number of other groves before engaging in different lines of work.

The Cape Sable Exploration Party, headed by Mr. Krome, made a survey of the Cape Sable country shortly after this and it was my good fortune to be a member of it. This was the first survey made of the country and it was attended by many hardships. We were, it is believed, the first white men to put foot on some of the soil in this wild country. The time consumed in this work covered nearly a year, but the actual survey took about ten months. The greatest difficulty experienced was in getting supplies, which had to be transported from Cutler, a distance of 26 miles, along the Camp Jackson trail to our camp, which was located this side of Royal Palm Hammock. Supplies were delivered to Camp Jackson by wagon and thence to Camp East Point on Long Key, where the members of the party assisted in carrying the packs, weighing about 75 pounds each. Following this general survey came another by the railroad people, who were seeking the best way southward. The railroad survey followed the Camp Jackson trail to a point south of Royal Palm Hammock where it was abandoned for the present time.

Shortly after this I got a job as a walking boss on the extension which kept me busy for a long time. While holding this job I made the acquaintance of a genuine West Indian hurricane, on October 18, 1906, the one that caused so much damage. The chief danger from hurricanes is from the action of the sea. When one is remote from the ocean and is living in a well-built house a hurricane is no more to be feared than a heavy storm in the north.

After quitting work on the extension I went back to my old job of setting out groves and engaged in the general fertilizer business. Three years ago I was appointed postmaster of Homestead and am still on the job.

As I look back on the pioneer days when the “road” from Cutler was a mere trail, along which all our supplies had to be brought, and consider the great changes that have been made, it makes me feel glad that I’m living in times when modern conveniences are within the reach of us all. Now we can go down to the corner grocery and get our meat, sugar and bread, as well as the other necessary supplies. If we are too lazy to do for them, we simply telephone our wants and the obliging grocer does the rest. But the “corner grocery” in those early days was at Cutler, 14 miles from Silver Palm, which was reached by a trail that was rough and rocky all the way. Getting groceries in those days was serious business, for even if a horse were used to bring the load, the trail was so rough that everyone preferred to walk. But while living was primitive the people were companionable and most of us were fairly contented.

There were two trails in those days — the Longview trail that led from Cutler to Longview. This is the road we used in getting our supplies from Cutler to Silver Palm. The other trail was the Camp Jackson trail which led from Goulds to a point this side of Royal Palm Hammock. The supplies were usually carried encased in water-proof material so that if the packcarriers fell in the water no damage would result to the grub. Some people would naturally think in this glade work that our chief concern was to dodge snakes, bears and other inhabitants of that wild country, whereas our first and only anxiety was to know that there was plenty on the table to eat and more coming on the way.

Traveling through the glades was as difficult a job then as anyone could ask for. The plan was simple enough — just load a small boat with your supplies and take it along with you. The wading was generally good — that is, as good as one could expect in that section of the country.

I have a number of pictures taken of Mr. Krome and others in our party, all rigged out in their gunning costumes. There were plenty of deer hereabouts in those days and as venison was good eating we helped ourselves. Burt Yellery killed three as fine deer as I ever saw on the glade between Homestead and Florida City right where the railroad crossing now is. Burt had never killed a deer before, but he landed three in a row on his first hunt.

My first “house” in the Silver Palm section was one of the first in the Homestead territory. Of course there was nothing in what is now Homestead, excepting a corduroy road that I helped build from the site of Modello south.

To come back to my mention at Silver Palm. If anybody thinks it wasn’t a primitive affair, let them come to my house and I will show them a photograph of it that will tell the story better than I can. To begin with it was built of logs and clapboards. No, there were no windows whatever — just one door. The roof was made of palmetto thatch which shed the water fairly well. Nowadays we would hate to put a cow in a shanty of that kind. But it was the best that could be had in those days, and there were plenty who didn’t have even as good. Of course when we got a bit chesty and the sun of prosperity began to shine on us, we could build a double-pen loghouse (two loghouses built tandem a short distance apart, with a common roof over them, forming practically one house with a covered porch between them). The man with a double-pen log house was “it” in those days.

Gunning then was fine. There were plenty of deer and now and then we would run across a bear, but never succeeded in getting one. Quail were very numerous, but there were no pheasants or wild turkey, although the Ten Thousand Islands country, which is not very far distant from Homestead in a straight line, has lots of game of this kind. Wild ducks were very plentiful then, but I never bothered to shoot them, preferring to use my ammunition on deer, for I was very fond of venison. There was another kind of “game” in those days as well as now — the gay and festive mosquito. One of my pictures shows a tent occupied by W. J. Krome which was very completely camouflaged with mosquito netting. The tent and the netting are in plain sight, but W. J. is nowhere to be seen. Another of my pictures shows us busily at work in our White Water Bay Camp, burning a smudge to drive the little pests away.

I will stop here and let those who will follow tell of the early days in Homestead; of the days when the foundations were laid and the work of primitive town building begun. That I have enjoyed life is evident by comparing the pictures taken in those days with what the camera would tell now. In those days we walked. Now we “Ford” it for short as well as for long journeys, and maybe this has as much to do with the great increase in my girth as anything else. Anyhow we will let it got (sic) at that.