Anyone who starts to delve into the early history of this area soon reads about William J. Krome’s survey of a proposed route for an extension of the Florida East Coast Railway from Miami to Cape Sable. Jerry Wilkinson has written an account of the expedition on his website, Keys Historeum. This survey was recorded in Dade County on July 8, 1903 and shows the location of Camp Longview, which, to the best of my knowledge, no one has ever seemed to know. This survey shows its approximate location: in the NW 1/4 of 28-57-38 at the southeast corner of the intersection of Palm Drive (S.W. 344 St.) and Loveland Rd. (S.W. 217 Ave.).

Click on “William J. Krome’s 1903 Survey” to download a copy of the survey. Then, zoom in to see the symbol for the camp.

Interestingly enough, the survey as recorded with Dade County is not as accurate as the map subsequently drawn up by L. Larson for the Land Department of the F.E.C. Railway in December of 1903. The location shown on that map is identical to that described in a letter from William J. Krome to E. Ben Carter, dated March 5, 1903, which states that the location was in the NE 1/4 of 29-57-38 instead of in the NW 1/4 of 28-57-38. This letter is included in an essay about the Cape Sable Expedition by Jerry Wilkinson. The location of Camp Longview was on land that had been declared as Swampland by the United States Government and thus not given to the State of Florida as eligible to be homesteaded. 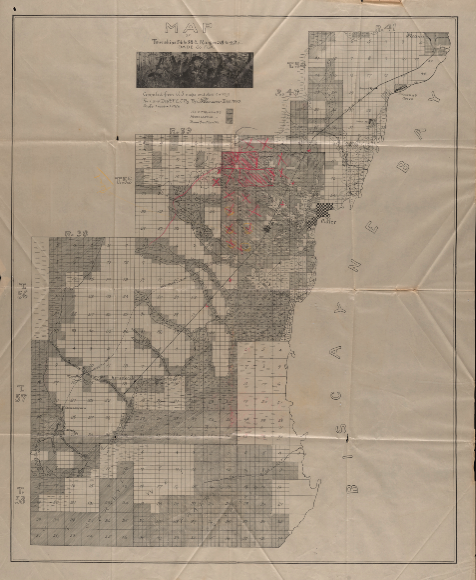 The location of Camp Longview on this map was approximately 700′ west and 100′ south of the intersection of Palm Drive (S.W. 344 St.) and Loveland Road (S.W. 217 Ave.), right at the edge of where the pine rockland stopped and the sawgrass prairie began.

The photographs below were taken by Edward A. Graham, who accompanied a party of F.E.C. officials on an inspection trip to Paradise Key in November of 1903.

Camp Longview was named after the long views which could be seen to the southwest, after traveling through the open savannah of the pine rocklands to the northeast.

In this photograph, you are looking northeast from the sawgrass prairie back towards the pine rocklands and Camp Longview.