Once the decision was made to establish a cemetery in Naranja, far away from Homestead but between Modello and Naranja, where fewer people lived, a new struggle broke out, similar to what had happened in Homestead. Interestingly enough, only one voice in opposition to the establishment of the cemetery has survived, that of Ernest M. Horton. No doubt, there were others, including George W. Moody in Naranja and Dr. John Dennis in Modello. But no documentary record of their opposition, if it occurred, is known to exist.

On November 22, 1911, Frederick S. Morse wrote to J. R. Ingraham, Vice-President of the F.E.C., including the petition signed by Dr. Tower and 51 others (but not Horton), asking him to donate lot 14 “for cemetery purposes. It is understood that they will remove the body that has been interred … because of this body having been burried (sic) there. I want to get the cemetery away from Homestead on account of the water supply for the Extension coming from the reservation to the east of it and so I will suggest that you give this tract asked for in this petition.” On November 22, Ingraham granted Morse’s request and stated that the petition would be filed in the F.E.C.’s records.

Morse wrote to Dr. Tower on December 6, 1911, stating that the Model Land Company was “willing to make deed for this property to the proper Trustees; and also, they are willing to hold this property separate for this purpose as soon as any parties that may have been buried in the cemetery at Homestead are removed to the new location.”

Horton would have nothing to do with any of this. He continued to fight the proposed cemetery and followed his objection of October 16 with a letter on January 22, 1912, in which he stated that the cemetery was “being occupied” and asked that the deed not be issued or, if issued, that it be revoked.

At some point after Horton started protesting, a petition was drawn up asking for lot 13 but it is unclear if that petition was ever circulated as no names are on it.

Horton’s protests were finally ended when the location of the cemetery was changed from lot 14 to lot 11 at the first meeting of the Silver Palm Cemetery Association on March 23, 1912. The disagreement between Horton and the signatories on the petition came at a cost, though, because while the Model Land Co. initially offered to donate the land, they tired of all the fighting over the location and decided instead to sell the property for $35 an acre.

Horton’s motive for his actions became clear in a letter he wrote to Morse on March 27, 1912. In that letter, he wrote, “Should deed be issued to 11, 14 and 13 will no doubt be open to purchase and I would beg to complete sale.” Just like Dr. Tower, Horton did not want a cemetery close to his property.

The first documented burial in the new cemetery took place between March 15 and March 22, 1912, when the week-old son of Lee and Gerda Fread, J. Leroy, died.1 In late March, 1912, the body of Mrs. H. G. Davis was buried there, near the “centre (sic) of lot 11”, according to a letter from Ernest Horton to Morse on May 2, 1912. A note was also published in the local newspaper, which had just been established by Rev. Joseph A. Kahl.2 This was almost certainly the wife of George H. Davis, who was the chief inspector of the F.E.C.’s Key West Extension.

The name of the cemetery was The South Dade Cemetery, as stated in the application for the charter that the officers applied for on June 17, 1913. The initial officers were: W. D. Horne, president; George W. Moody, first vice president; Claude W. Hill, second vice president; Marion L. Williams, secretary and treasurer. The executive committee was Yelles K. Knighton, Ernest M. Horton and Thomas Brewer. The document specified that the term of the charter was for 50 years and that the property to be acquired was “for a burial ground for deceased white people.” The charter also stated that the “corporation may acquire other land in South Dade County, in the same way but separate and apart from its holdings at or near Naranja to be used as a burial ground for deceased colored people.”3 On November 26, 1915, deed #3182 was issued by the Model Land Company for the cemetery. That deed is recorded in Deed book 127, page 152. The plat is in Plat book 2, page 108. 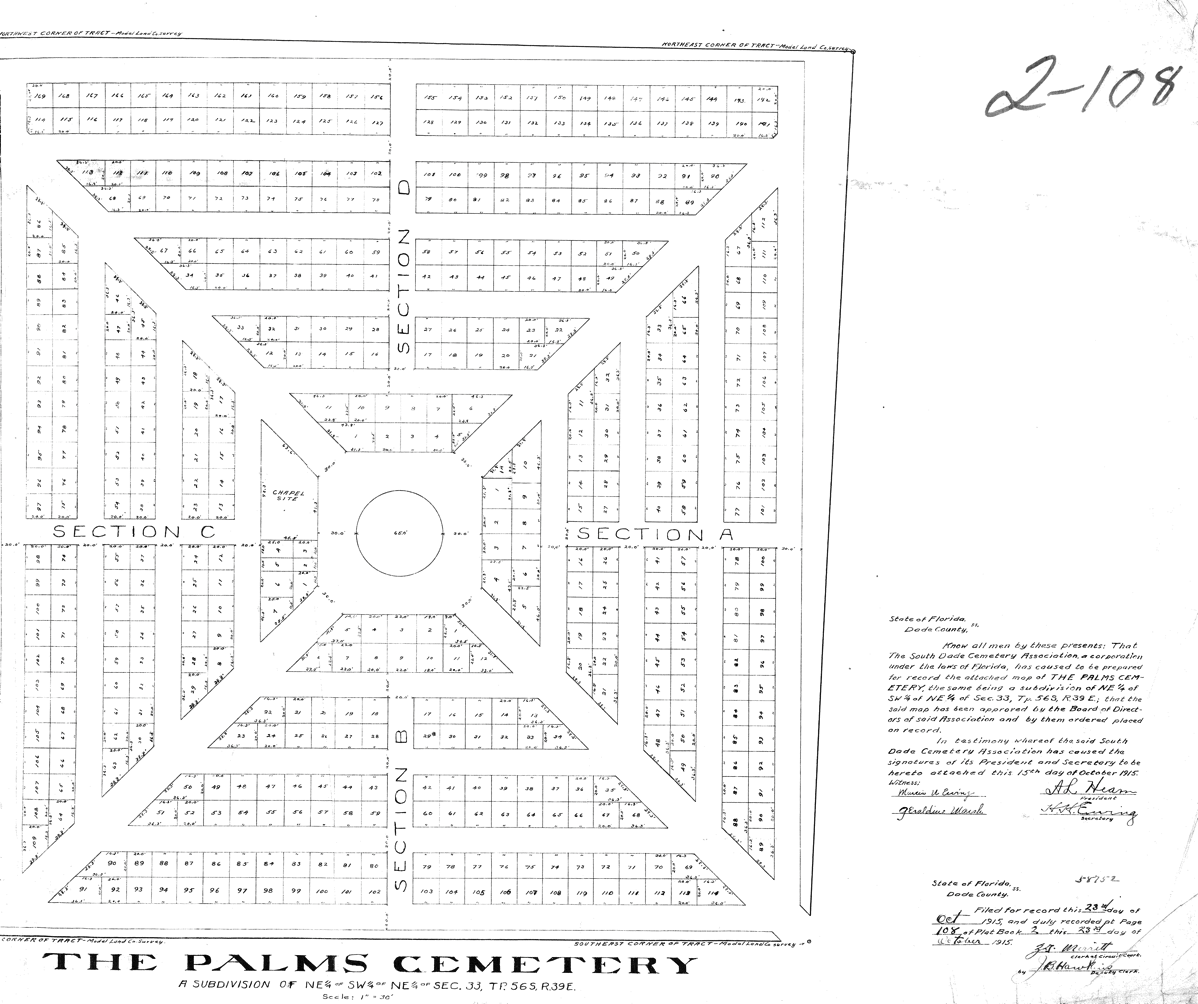 On October 17, 1914, the South Dade Cemetery Association convened, lots were sold to John E. Reynolds and Frank I. Wiggins for $10.00 each and Early L. Davis was paid $23.47 for his labor. Claude W. Hill was instructed to issue membership cards at $1.00 each, the funds raised going towards an improvement fund.