His homestead ran for 1,320 feet on either side of Tennessee Road from Avocado Drive on the north down to King’s Highway and Old Dixie Highway on the south. J. U. Free’s homestead was on the south side of King’s Highway and the homestead claim of James W. Campbell bordered King’s on the west side. James’ father, Neil, was a brother of Thomas A. Campbell. King and both Campbells all claimed homesteads during the period from June to September of 1906. The Church of Jesus Christ of Latter Day Saints, at the southwest corner of Avocado and Tennessee, is on lot 5 of King’s homestead.

William Alfred King was born on 29 December 1860 in Troy, which is about 50 miles south southeast of Montgomery, in Pike County, Alabama. On February 28, 1882, he married Frances Elzada Jones in Hatchechubbee, Russell County, Alabama. She was born there on December 24, 1866. Hatchechubbee, between Seale and Hurtsboro, is an unincorporated community in Russell County, which is in southeastern Alabama on the Georgia border. William and Frances’ first child, Adele, was born there on October 27, 1882.1

Shortly after Adele was born, William moved his family to Arcadia, in Desoto County, Florida. There, on January 25, 1884,2 their second child, Bertha,3 was born. Willie, their third daughter, was born in Arcadia on March 2, 1885.4 William did not stay in Arcadia long, as his son, Benjamin Franklin, was born in Barberville in Volusia County on November 10, 1886.5 6 From Barberville, he may have moved to Lake Maitland, which is now a suburb of Orlando.7 It is possible that his daughter, Joe Paul,8 was born there on May 31, 1895.9 From there, he moved to City Point, in Brevard County, where William and Frances’ last child, Marie, was born on June 20, 1901.10

It is unknown what William did to make a living or why he moved around so much. In 1900, however, the census of City Point in Brevard County gave his occupation as “Section Foreman RR.” Though not stated, he would have worked for the F.E.C. Railway. No records have been located yet that provide an arrival date for William in Dade County, but his daughter Joe, in an article she wrote for the Homestead Leader in 1923, wrote that her family was “moved here by a work train, since Papa was connected with the railroad, and even at that time the main track was laid only as far as the present crossing.”11 The only railroad crossing in downtown Homestead in 1923 was at Mowry Street so her father arrived in Homestead at the same time the tracks were laid. King’s daughter Marie, in an article written by Earl DeHart for The Miami Herald and published on November 2, 1971, was quoted as saying “her daddy had built offices for the railroad agent, the section foreman, a room for workers, a tool shed and a depot.” She wasn’t “sure of the exact year her father arrived in Homestead from his Perrine headquarters but it was a year or so before the first train arrived on Dec. 15, 1904.”12

In their published histories of this area, historians unfamiliar with railroad terminology have made the mistake of conflating the job of a section foreman with that of a construction foreman. Section foremen supervised a crew of workers who were responsible for maintaining a stretch of track, usually twenty-five to thirty miles in length after the track was built. Construction foremen supervised the work of the men who built the railroad track.13

Joe King wrote that her Papa was moved here by a work train and Marie King was quoted as saying that her father arrived “from his Perrine headquarters.” This is consistent with the job of a construction foreman. King supervised the crew of workers who laid the ties and secured the rails to them. When the crew neared Homestead, his men built the depot, the houses for the section foreman and the station agent and housing for the workers. By August 2, 1904, the “depot, section house and agents house” were completed and “a number of residences” were being built.14 Neither Joe nor Marie ever referred to their father as a “section foreman.” There was no need for a section foreman until after December, 1906, when the tracks reached Jewfish Creek. The only documented evidence that has so far been discovered about the earliest presence of William A. King in Homestead is that his wife visited Miami, stayed at the San Carlos Hotel and stated that her residence was Homestead, Fla. on October 22, 1904.15

The first train to arrive in Homestead did so on July 30, 1904. The first passenger train arrived in Homestead on December 15, 1904.16 The Kings were here before W. D. Horne, as Joe, in her article, wrote that “[i]t was several months before we had a neighbor – who happened to be W. D. Horne. He erected a store which blew down the second day after it was finished, and of course, he rebuilt it right away. Our next neighbor was our first depot agent, Mr. Worrall,17 now agent at South Jan.(sic)” W. D. Horne’s wife did not make her first trip to visit her husband until she went down on the morning passenger train on December 17, 1904.18 King and his family lived in the section house, as Joe noted in her article that “deer were so plentiful they slept in the back of the section house, and the quail used to eat with our chickens.” We do not know how many men were working on the railroad in the Homestead area from mid-1904 to mid-July 1906, when the dredges which created the railroad bed from Homestead to Jewfish Creek finished their work, but Joe King wrote that “[l]ater, several hundred men were sent by the Florida East Coast railroad to start the extension from here to Key West.” She also wrote that “Mr. Horne and Papa were the first to plant tomatoes on the East Glade.”19 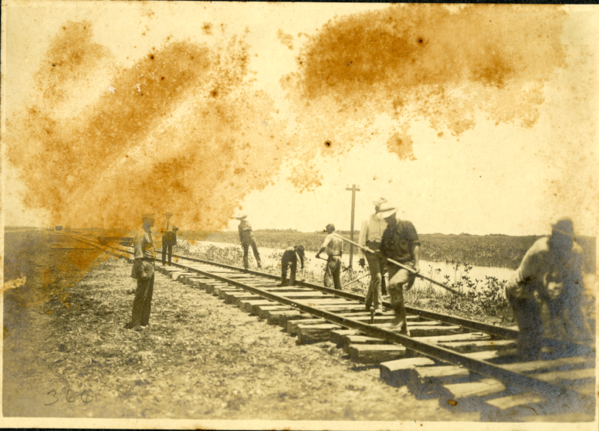 After King quit working for the F. E. C., probably at about the same time as he claimed his homestead, he got into the business of supplying cross ties which he sold to the railroad. Having supervised a large crew of mostly African-American men during the construction of the railroad, he had a ready pool of labor to cut down trees for railroad ties. He had a portable sawmill, which he used on the homesteads of Lee Lehman20 and Ida Cowan in Longview21 and Charles H. Woodbury,22 on his property east of Redland Road and north of Coconut Palm Dr.

King’s homestead was first claimed by William P. Dusenbury on October 21, 1903. Dusenbury was a close friend of William J. Krome and a member of his survey party when the F.E.C. planned to go to Key Largo via Card Point. He was also in charge of survey parties on Key Largo and was at Long Key with Berte Parlin when both were swept out to sea on Quarterboat #5 in the October, 1906 hurricane. Parlin lost his life while Dusenbury survived. Due to his job responsibilities, Dusenbury was unable to spend much time on his claim and it was cancelled on July 7, 1906. King picked it up on July 18. It is very likely that this was pre-arranged as King surely knew Dusenbury. 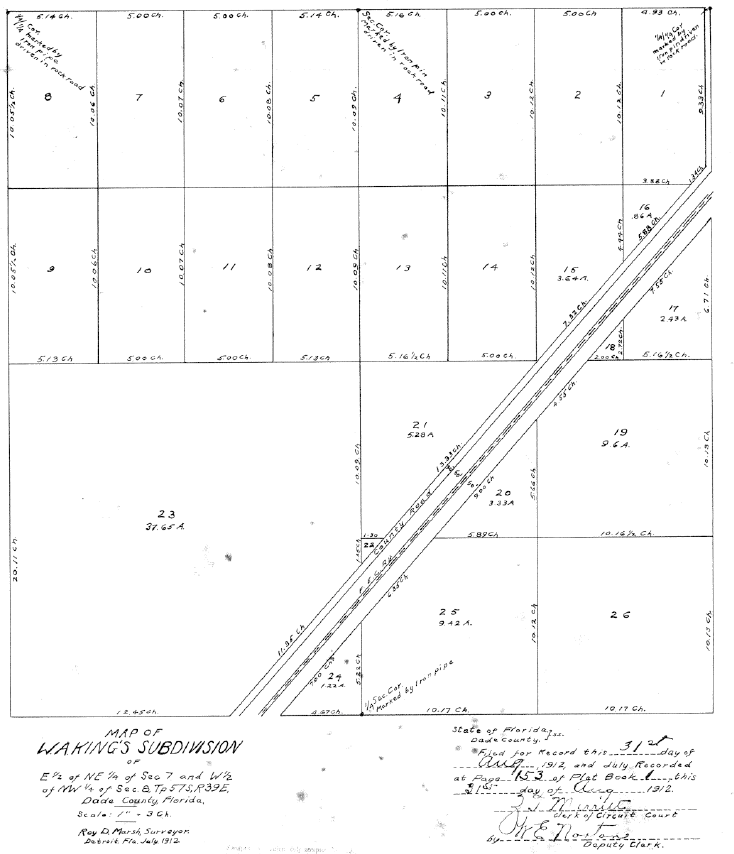 On August 31, 1912, shortly after he proved up his homestead on May 12, King submitted the above plat for the subdivision of his land. It was surveyed by Roy D. Marsh, who had claimed a homestead in 1910 on Lucille Drive just west of Tower Road. The eastern part of lot 23 of King’s subdivision is where the Breezeway Drive-In once was – it is now the site of a shopping center, anchored by Winn-Dixie.

King, like so many others, proceeded to sell off his homestead soon after obtaining title to it. In March of 1913,23 he sold lots 3, 4, 13 and 14, a total of 20 acres, to Helen Fanning McIntosh Adair. Helen was the mother-in-law of Arthur W. Chapman, an elector for the incorporation of the Town of Homestead in January of 1913.24 Chapman was also a lumberman who had a sawmill on his homestead 3 miles northwest of Homestead and he was the owner of the Homestead Lumber Co.25 Mrs. Adair turned around and sold those lots to Oscar Thomas on November 20, 191326 and then Oscar sold them to Wade H. Harley on September 18, 1914.27 Wade Harley was a real estate developer in Miami, with an office at 231 1/2 12th St., now Flagler St.28 Doubtless, King, Adair and Thomas made a good profit on their transactions. In 1914, King sold lots 18, 19, 20, 21 and 26, about 30 acres, to George E. Mallow, who had a barber shop in Miami at 336 12th St.29 30 in 1914 but later moved to Homestead and had a shop in the Alsobrook Arcade.31 Those lots mostly fronted on the rock road adjacent to the railroad track that crossed his property.

Oscar Thomas was married to Mollie Campbell, a daughter of Thomas Alexander Campbell, for whom Campbell Drive is named. He was a marshal for the Town of Homestead in 1917 but died during the Spanish Flu pandemic on January 21, 1919 at the age of 29.

In 1913, King was part of a group of men who went down to Cape Sable to look over the prospects for developing that area. The members of that party included W. D. Horne, Sid Livingston, Russ Tatum, Eb Caves, Ed Loveland, Orville Calkins, Fred Loomis and J. D. Redd.32

The Kings were solidly middle-class. Four of their daughters lived in Miami but their son Ben and daughter Marie stayed in Homestead. By 1925, with the real estate market heating up and King getting older, they sold most of their homestead property to developers and moved to Miami in late May.39 They continued to stay in touch with their friends in Homestead, though, and as late as October of that year, Fannie visited with her daughter Marie.40

King had purchased property in Quitman, Georgia and they moved there “as soon as repairs could be made on their home” after it was damaged in the 1926 hurricane which struck Miami on September 18, 1926.41 Sadly, Fannie died there on October 18, 1926, due to kidney and heart problems.42 43

Thomas J. Letchworth, a real estate developer who developed the Rosewood subdivision on King’s Highway and lived on the street when he was enumerated in the 1930 census of Homestead, was largely responsible for having N.E. 15th Street named King’s Highway. Before then, it was named in honor of Charles C. McMinn, who claimed his homestead on December 4, 1903. 40 acres of his homestead fronted on what was initially known as McMinn Drive.44 McMinn committed suicide on October 6, 1917 and by 1924, the road was re-named King’s Highway. McMinn Road, which is S.W. 172 Avenue, is still named for him.

After his wife’s death, King divided his time between his farm in Quitman and Miami, where he kept in touch with old friends and visited with his children. When his health failed, he went to live with his daughter Bertha in Sharpes and died there on June 14, 1936.