I started out my working life as a rod man for a civil engineering company and I’ve never lost my fascination with land records as a rich source of information on the residents of a particular area. Ed McMichael informed me a few days ago that his grandfather, James Rufus “Ruf” Dorsey, had rented a house on what is now N.E. 5th Avenue when he came to Homestead in 1913. It didn’t dawn on me until I had devoted some thought to that information that Ruf’s house was located on the land that John Ulric Free had patented in 1910. That discovery set me off in another direction, because I had read in Jean Taylor’s book that J.U. Free had “bought 50 acres and cut it up into lots for Homestead’s first subdivision.”

Jean Taylor spent 16 years working on her book, The Villages of South Dade and it is an indispensable book for anyone researching the history in this area. Without it, we would have lost a great deal of information about the early history of this area. However, because it is based on interviews with descendants of the pioneers, it should not be relied upon to provide definitive answers to questions. Instead, it should used as a starting point. Today, researchers are blessed with vastly easier access to primary sources and information that Taylor simply had no way of obtaining. She did a wonderful job and provided a splendid introduction to the history of this area, but we, as researchers, need to build on what she wrote.

The subdivision that Ms. Taylor probably referred to was J.U. Free’s subdivision of his homestead, recorded in Book 1, page 9. Free’s subdivision was of his entire homestead, 160 acres. It was surveyed on December 9, 1909 and recorded on March 2, 1910, before he was granted his patent on June 13, 1910. That land was subsequently further subdivided, starting in 1913 with Free’s 2nd Addition to Homestead. 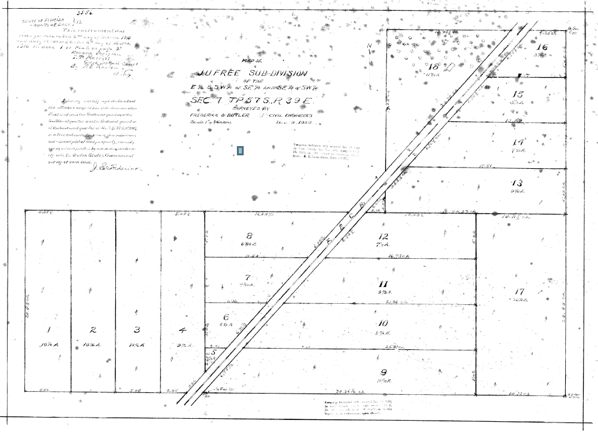 The shopping center anchored by Winn-Dixie on King’s Highway and Old Dixie is located on part of Free’s homestead.

While perusing the minutes of early Town Council meetings, I came across the name R.F. Tatum repeatedly – he was the first mayor of the Town of Homestead. I had tried to research him before, but hadn’t had much luck. When I looked at the plat of Tatum’s Ridgedale Addition, though, I discovered his wife’s name, Jessie R. That proved most helpful in my research. The plat is dated June 26, 1917. 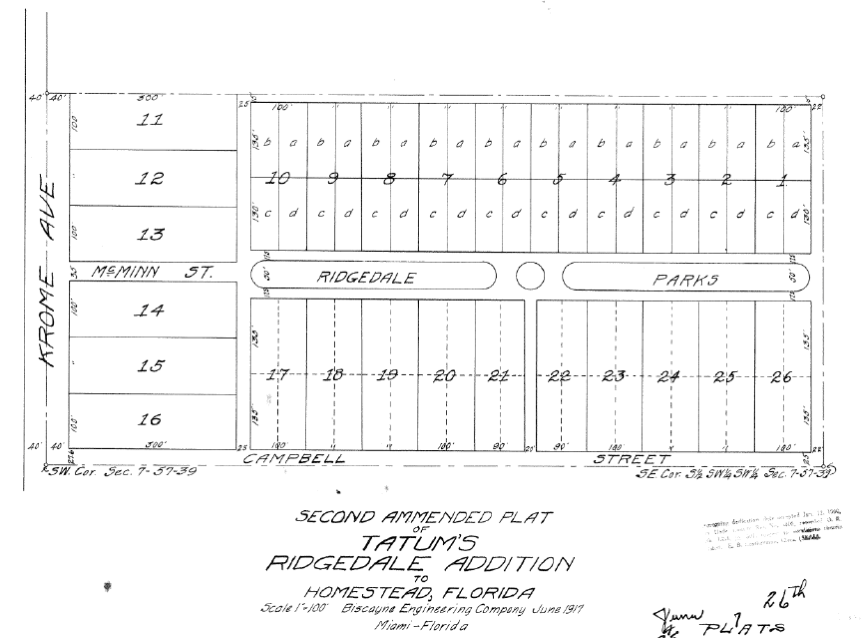 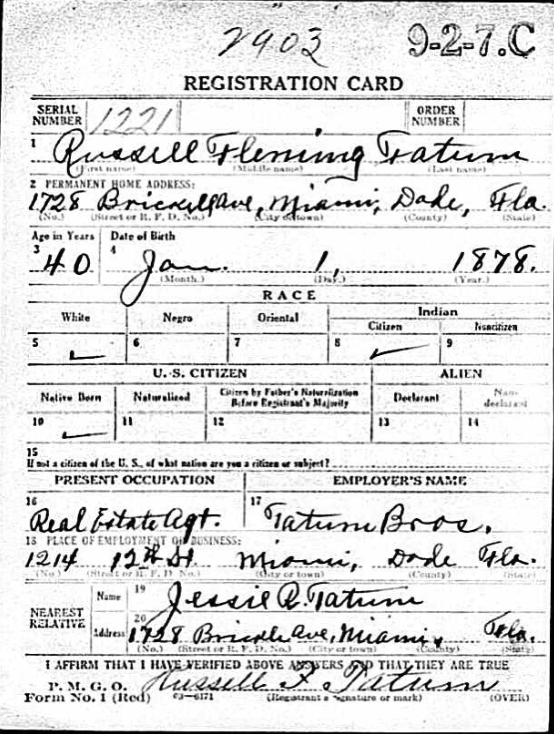 Note Russell’s occupation (real estate agent) and his address, 1728 Brickell Ave., Miami, at the time of his registration, which was September 9, 1918. He was no longer the mayor of the Town of Homestead by that time. Note also Russell’s employer: Tatum Bros.

The Tatum Bros. were Judson H. (1859-1923 – J.H.), (Bethel Blanton (1864-1943) – B.B.), Johnson Reed (1866-1938 – J.R.) and Smiley Mosteller (1870-1935 – S.M.) The Tatum Brothers were enormously influential in the development of Dade County. B.B. bought The Miami Metropolis newspaper in 1899 and he and a brother “owned an abstract company, dealt in acreage and city lots, both in a large way, and built the first street railway in 1906.” They were active in the Baker’s Haulover area of Miami Beach, in addition to operating as the Miami Land & Development Company, which owned 35 sections of land east of Florida City and played an important role in the history of Florida City. They also operated the dredge that dug part of the canal from Miami up to Lake Okeechobee.

The settling of the Homestead area, as well as the rest of Dade County, was a tale of rampant real estate speculation, an activity that has continued to this day. Some men (and a few women) were better than others at it and they became very wealthy. Others failed miserably. It is a twisted and tangled tale that will likely never be unraveled but I’m fascinated by it and will be posting more on the subject in the future.