The subject of African-American history in general is a difficult subject to tackle, particularly for White historians. For historians working in a Southern city, it is even more difficult. Nonetheless, in this post, I am going to outline a few details about three enterprising African-American business people in early Homestead.

In 1903, John S. Frederick, a civil engineer who worked for the Flagler interests in Miami, surveyed the route of the railroad to Homestead from Miami and platted the Town of Homestead in 1904. 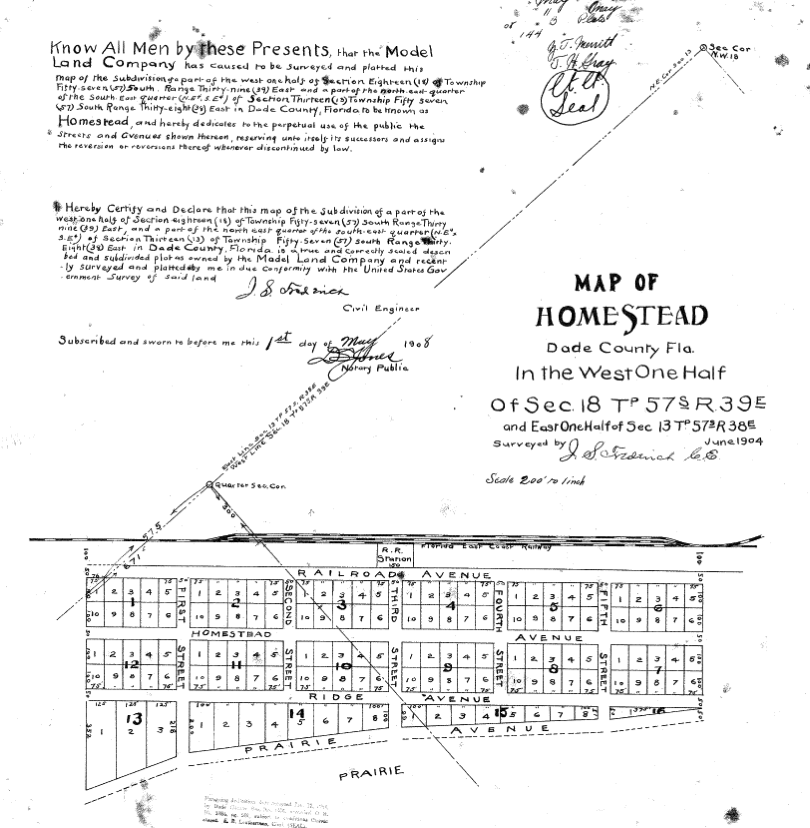 Town of Homestead as platted in 1904

On the plat above, the intersection of the two diagonal lines is that of Krome and Mowry. Railroad Avenue is now Flagler.

The land reserved for the Town on the west side of Krome Avenue was in section 13 of township 57 south, range 38 east. It comprised the east half of the northeast quarter, the east half of the southeast quarter and the southwest quarter of the southeast quarter. All of the subdivisions in this essay, with the exception of the Pinehurst Addition, which was originally part of the Leonard Mowry homestead, were on land owned by the F.E.C. David Torcise’s Google Earth map of homesteads, available by clicking on the link at the lower right of this page, provides more detail.

At this distance, it is very difficult to find the original deeds between the F.E.C. and purchasers of its land but in September of 1911, Charles M. Nelson platted Nelson’s Addition to Homestead and that was followed by the Pinehurst Addition and W. D. Horne’s Addition in 1912, McClain’s and Nobles’ Additions in 1913, Ewing’s, Tatum’s Colored Town and Logan’s Additions in 1914 and finally the Fread Additions, starting in 1918. 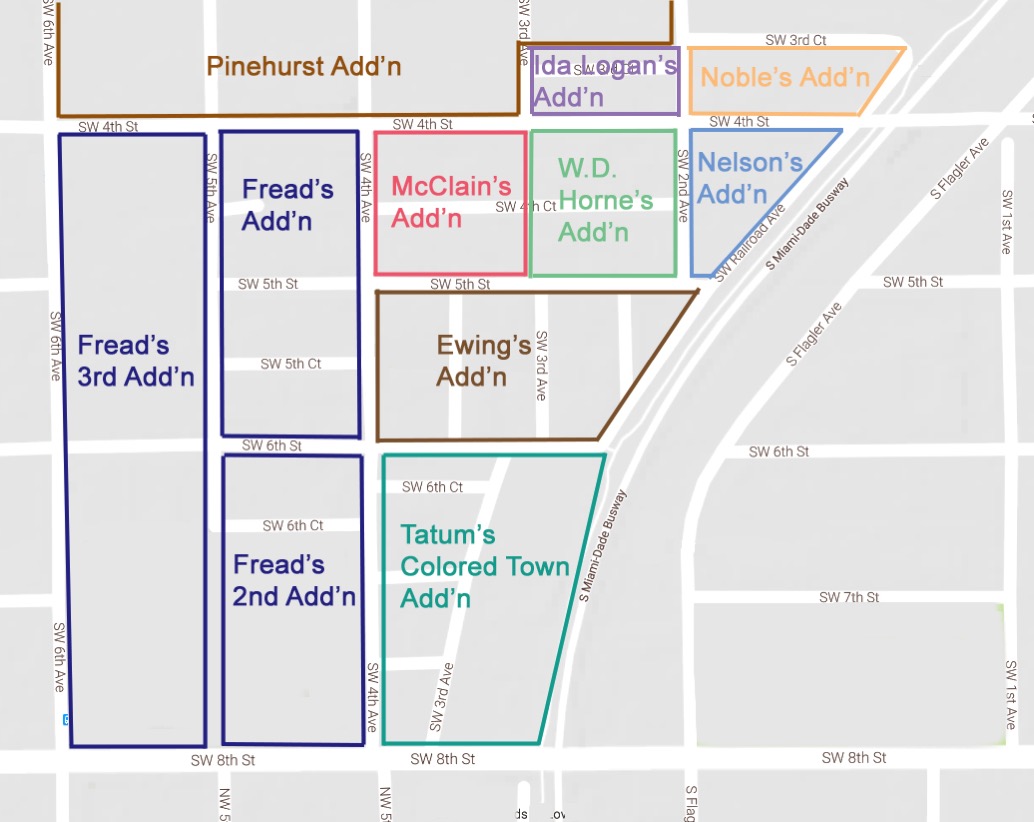 The owners of the land which was subdivided to create these subdivisions were an interesting group of men. Charles M. Nelson was a pineapple grower in Dania and a real estate speculator in Homestead. Robert W. Ralston, a prominent real estate speculator from Miami, created the Pinehurst Addition on 40 acres he purchased from Leonard Mowry. Mowry filed his claim for 120 acres on December 28, 1908 and patented it on September 21, 1911. Ralston filed his plat of Pinehurst on December 3, 1912. W. D. Horne is well-known in Homestead history but his role as a real estate salesman is not much commented on. Little is known about William Nobles, but he was here as early as 1910 and may have come from Walton County, Florida. He purchased the Homestead Grocery from Edward A. Sistrunk and subsequently sold it to Charles T. Fuchs. Hugh H. Ewing, a former insurance agent, was part of a group of men who came from Topeka, Kansas and homesteaded in the Longview area west of what was then Detroit and is now Florida City. J. H. Tatum, who platted Tatum’s Colored Town Addition, was a distant relative of Russell F. Tatum, the Town of Homestead’s first mayor. J. H. and his brothers, Smiley, J.R. and B.B., were the Tatum Brothers Real Estate & Investment Company. All of these men were in the business of making money.

Leonidas Lee Fread, the man who platted the three Fread Additions to Homestead, was an exception to the others. He came here in the fall of 1911 from Winter Haven, Florida, where he was a farmer, purchased 10 acres and set out a fruit grove. Lee was born in Franklin County, Indiana in 1851. As the African-American community grew and moved west, he subdivided his property and built houses to sell or rent to them.

Early in Homestead history, the African-American workers on the railroad lived in shacks on the east side of the railroad tracks. Soon enough, public sentiment forced the F.E.C. to move their shanties to the west side of the track and by 1911, with Nelson’s Addition, they were moved even further south and west.

There is a myth, which may have originated with Jean Taylor, that states that Mark Lawrence McClain, a Bahamian worker on the F.E.C. Railroad, homesteaded 160 acres in southwest Homestead and created McClain’s Addition in 1927. This is not true – the plat was recorded on March 3, 1913. The names given on the plat are L. McClain and Rebecca, his wife. McClain, who was born in North Carolina in either 1846 or 1831, depending on which census you view, was a mulatto whose father was from Northern Ireland and whose mother was born in North Carolina. As I stated at the beginning of this article, researching African-American history is difficult at best. Among the few records (other than the plat of McClain’s Addition) I was able to find that mention McClain are the 1920 and 1930 censuses of Homestead. In the 1920 census, Elmer McClain, 64 and his wife Rebecca may have lived in the Florida City area. In the 1930 census, however, Lawrence was shown as widowed, 99 years old and living on Eckman (now Roberts) Road north of Avocado. He also appears on the delinquent tax lists of 1917, 1918 and 1920, published in the Homestead Enterprise. Delinquent tax lists were published in the year after the tax was due, giving the owners public notice that their property would be sold at public auction to satisfy the tax due. On the 1917 list, McClain owed taxes on 33 out of the 48 lots in his subdivision. On the 1918 list, he owed taxes on 31 while on the 1920 list, he only owed taxes on 7. He clearly was doing better every year.

I’m not aware of any historian who has written anything about Roman W. Logan and his wife, Ida. Jean Taylor, in an article in the December, 1977 issue of Update, published by the Historical Association of South Florida, noted that “a colored baker named Logan was hired by Charles T. Fuchs.1 It is not known who captioned the photograph below, but Logan is pictured on the right with a pan of bread loaves in his arms. This photograph is featured on page 22 of the book, Papa Fuchs’ Family, 1881 – 1981, so it is likely that someone in the Fuchs family provided the names of the people in the photograph.

Roman was born on March 18, 1874 in Nassau County, Florida. His father Benjamin was born in South Carolina in 1847 and was very likely a slave. Roman first married Maggie Jones in Nassau County, Florida in 1896 and then married Ida Drayton in Miami in 1906. Ida had at least two children by her first marriage: Samuel and Alexander. On April 23, 1910, the date of the Miami census, Roman and Ida lived on 3rd St. in Miami and he was a baker. Then, on April 29, 1910, he was enumerated on Long Key, where he was a “servant” in what may have been a boarding house run by John Ulric Free. He registered for the draft in September of 1918 in Homestead and in the 1920 census, he and his wife’s occupations are given as “grocery merchants.”

Jean Taylor, in her book The Villages of South Dade, wrote that Moses Griffin, our third African-American entrepreneur, was born in 1888 in Brooks County, Georgia, the son of a wealthy white plantation owner and an African-American mother. He came to Homestead in 1912, invested in real estate and operated a taxi service for African-Americans between Homestead and Miami. On the 1917 delinquent tax list, published in the Homestead Enterprise, he owed taxes on 4 lots in Ewing’s Addition. He does not appear on either the 1918 or 192o delinquency lists so either he paid his taxes on time or he had disposed of his holdings.

Despite the fact that Roman Logan was enumerated as a “mulatto” in the 1910 census of Long Key, he was dark-complected. However, Lawrence McClain was a mulatto because his father was from Northern Ireland and Mose Griffin was a mulatto because his father was White. It is interesting that two African-Americans of light complexion in early Homestead were also successful businessmen. Frenzied land speculation was the order of the day in early Homestead and it wasn’t only Whites who engaged in the practice. A select few African-Americans were able to play that game also.