The story starts on March 14, 1866, when Elliott Prouty Livermore was born in Shrewsbury, Massachusetts. Shrewsbury is in Worcester County, 30 miles west of Boston, which was an important manufacturing and industrial center at that time. His father Hiram, like most men in that era, was a farmer. His mother was Laura E. Prouty and he was named after his maternal uncle, Elliott Cutler Prouty. The Prouty and Livermore families were prominent in Worcester County and both sides of Elliott’s family traced their ancestry back to the Revolutionary War. In 1880, Elliott was attending school in Acton, Massachusetts and living with his grandparents, Jason and Laura Livermore. In 1886, he was working as a clerk in Worcester and lived with his father.1 He must have done well, as he stayed at the Waverly House in downtown Boston and enjoyed “the salt sea air” from its piazzas in July of that year.2 He married Carrie L. Goodwin on June 3, 1890 in Worcester and their son, Earl P., was born in Clinton, Massachusetts on April 23, 1891. A daughter, Myra, was born in 1894. During this time, he was working for the Bedford Lumber Co. in Bedford. By 1896, he and his family moved to Manchester, New Hampshire, where he, Jesse and his father all worked for the Austin, Flint & Day Co., a manufacturer of “doors, sash, blinds and mouldings.”3 He moved on to the Manchester Sash & Blind Co. before hiring on as a superintendent of the Frank L. Miller Co., another sash and door manufacturer, in Bridgeport, Connecticut. He stayed there until 1906, when he went to work for Osteyee Bros., a building contracting company, in Pittsfield, Massachusetts. He stayed there a few years and then moved back to Bridgeport, where he became president of the Livermore Lumber Co.

Elliott’s brother, Jesse Lauriston, who was born on July 26, 1877, figured prominently in his life. Known as the “Boy Cotton King,” he was a well-known stock market speculator who was a multi-millionaire by 1908, when he financed Elliotts’ purchase of the Tomlinson Lumber Co. in Bridgeport, Connecticut.5 In April of 1909, Jesse sold the property that the Livermore Lumber Co. stood on to E. F. Hutton. The factory burned to the ground in a suspicious fire on July 16 of that year, destroying $12,000 worth of inventory.6

Livermore then went back to working as a superintendent with the Frank L. Miller Lumber Co. but that company, too, was badly damaged in a fire on September 9, 1910.7 Despite Livermore’s business tribulations, he and his wife remained members of the upper-class. Carrie Livermore was a member of the Bridgeport Art League in 19118 and a patroness of the Bankers Club cotillion, held in the Bridgeport Masonic Club in March of 1913.9 He remained an employee of the Frank L. Miller Co. until 1913, when he moved to Hartford, Connecticut. There, he worked as a superintendent for Andrews & Peck, another building material supplier, until sometime in 1916.

Livermore first appeared in the Miami newspapers in 1917, when he was a guest of his brother Jesse on the chartered yacht Dorondo, which belonged to Henry W. Savage, a well-known New York theatrical producer.10 Jesse, along with his brother and Frank B. Shutts, established the Livermore Investment Co. Shutts was the owner of The Miami Herald and the founder of the law firm Shutts & Bowen, still in existence. In November, 1917, the Livermore Investment Co. leased 3 lots on the N.E. corner of what is now N.E. 1st St. and 1st Ave. The lease specified that the lessee would erect a building costing not less than $100,000, to be started in 90 days and completed within two years.11

In December of 1918, Livermore and his wife entertained a “large party” at the opening of the Berni Grill and Tea Room, a posh watering hole for the wealthy, located at the corner of N.E. 2nd St. and Biscayne Blvd. Gaston Drake, who founded the Drake Lumber Co. in Princeton, and his wife also entertained a large party.12 As befitting a man of his social standing, Livermore and his wife lived at 116 Kathryn Boulevard, now Brickell Bay Drive, in Point View, a wealthy enclave located between S.E. 14th St. and 15th Road on the east side of Brickell Avenue.13 He moved there after selling a “belvedere bungalow” on Bird Avenue, which is now N.E. 15th Terrace, for $5,000 to Mrs. W. S. Pratt14 of Atlanta, Ga.15 Bird Avenue was one street south of Tatum Avenue, named for the Tatum Brothers.

In 1919, Livermore purchased the west half of the homestead originally claimed by Walter H. Harper, who owned a sawmill and turpentine distillery in Wray, Georgia. Harper arrived in Miami in April of 1909, en route to Modello, where he intended to go into the turpentine business.16 After prospecting for a homestead, he claimed the NE 1/4 (160 acres) of 31-56-39 on December 4. His claim was bounded by what is now theoretical S.W. 172 Avenue on the west, Bauer Drive on the north, Tennessee Road on the east and Epmore Drive on the south. After Harper claimed his homestead, he got to work, setting out 7 acres of grapefruit, avocados and oranges and built a 6 room house.17 On July 26, 1911, Harper paid cash for his claim and patented it on December 9th of that year.

On July 26, 1910, a group of men petitioned the County Commission to declare as a public route a road that started on the west right-of-way line of the F.E.C. Railway tracks “where the south boundary line of the north half of section 33” crossed the Naranja public road and extended west 3 3/4 miles “to the rock road which leads from Homestead to Miami,” which was Redland Road.18 The route crossed the property of Matthew Q. Simmons, whose property straddled the road on the east side of S.W. 157th Avenue and then followed the half-section line (Epmore Drive) through the properties of David Chapelle “Chap” Brown and his brother Isaac H. who had claimed the quarter-sections on the east side of Tennessee on the north and south sides of the road. In response to a complaint letter to the Miami Metropolis, written by one A.P. Davis,19 who complained that Brown was getting preferential treatment from the County, Brown replied “that this road was built with funds raised of W. H. Harper, M. Q. Simmons, D. M. Roberts, Brown & Moody, myself and others” and that they had “furnished fuel for road engine and [paid] for the services of an assistant on the engine.” They had also raised $225 to pay for the road.20 Davis may well have been correct in his complaint about preferential treatment, as Chap Brown was the Brown in Brown & Moody, the mercantile company owned by George W. Moody, a prominent businessman in Perrine and Naranja.

Louis F. Flipse was a native of Sheboygan, Wisconsin. His brother, Gustav, worked for his father, Cornelius, who owned a small business, C. A. Flipse & Son. After Cornelius died in 1905, Gustav took over and prospered in the business. His brother, Louis, was a teacher and an inventor, having been granted at least two patents by the State of Wisconsin.23 It is not known why Louis came to Dade County, but advertisements touting the fertile soils of the Redland District and opportunities to get rich in South Florida were placed in newspapers all over the country. After Flipse purchased his property from Hunter, his brother, Gustav, helped him with his “large grapefruit farm” for a period of time but soon went back to Milwaukee to run his business.24 The Miami Metropolis reported in 1914 that Flipse was “carrying out a number of original plans in the way of intensive farming in his Redland soil.” and that he was employing Italians because he found that “these people adapt themselves readily to conditions here and that their methods bring excellent results.”25 The 1920 census of Redland showed Vincent Critti and his wife Julia, Orazio Sincore and his wife Schanzia and Philip Beyando and his wife Leona living near Livermore. Critti owned a grocery store, V. Critti and Co., in Homestead in 191826 and Orazio Sincore was Nick Sincore’s grandfather. Leona Sincore, Philip Biondo’s wife, was Nick’s aunt.

It is not known what brought the Livermores to Homestead, but they registered at the Homestead Hotel on September 1, 1919.27 In October, the Homestead Enterprise reported that Livermore had purchased “the L. F. Flipse place, one of the finest in the vicinity,”28 so when the Miami Metropolis reported that he had set out 10,000 pepper plants,29 it is likely that he had them planted on his property by employing Flipse’s Italian laborers.

Livermore integrated himself into the community rapidly, becoming one of the shareholders of the new Citizens Bank, which was founded in April of 1920. Other shareholders included Alexander C. Graw, the owner of the Homestead Enterprise; Samuel A. King, a future mayor of Homestead and the father of Neva King Cooper; Edward C. Romfh, a Miami banker and Ira B. Jeffrey, the president of the Miami Lumber Co., which had a sawmill on West Mowry St.30 In 1921, Livermore was elected as a director of the Royal Palm Truckers Association,31 which had a packing house on lot 20 of Alsobrook’s Addition to Homestead. It was located on the west side of the railroad tracks at S.W. 2nd Street. 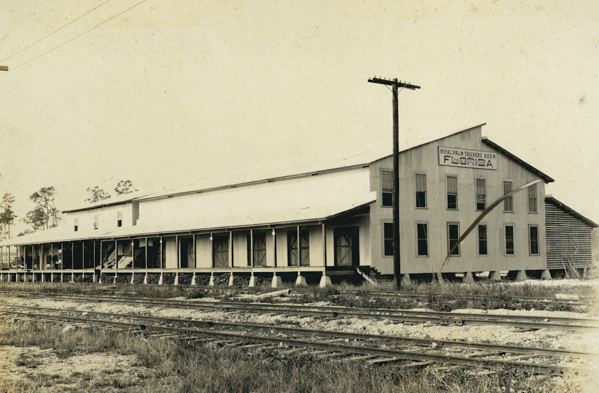 In mid-August of 1921, Livermore was issued a building permit for $10,000 ($146,000 in 2021 dollars) worth of improvements32 to his property and was elected president of the Naranja Citrus Growers Association.33 In 1922, he attended the Shriners Convention in Key West with Charles T. Fuchs, J. D. Redd and his wife, A. R. Livingston and his wife, Sam McKinstry and F. H. Lindeman. 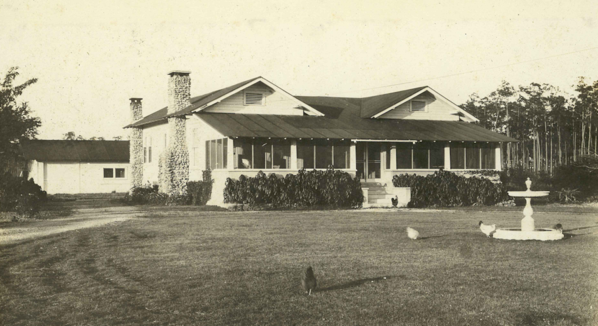 The first mention of the name ‘Epmore’ appeared in the Homestead Enterprise on June 21, 1923, when it was reported that Carrie Livermore entertained the “Stars” (members of the Order of the Eastern Star) at Epmore Grove on July 3.34 The name is obviously a neologism combining the first letter of her husband’s first and middle names and the last four letters of his surname.

Carrie Livermore joined the Homestead Women’s Club in 192335 and her husband was elected a director of the Florida Avocado Association.36 Early in 1924, they visited Elliott’s brother Jesse and his wife in Miami Beach, where they had rented “a palatial residence at the Beach for several months.”37 In addition to the positions Livermore already held, he joined the Silver Palm Citrus Growers Association in 1924.38

In 1925, Livermore sold his grove to A. R. Livingston, the Kleagle of the Homestead chapter of the Ku Klux Klan40 for $100,000 ($1.5 million in 2021 dollars).41 He then purchased Waltonhurst, at the corner of Redland Road and Biscayne Drive, from the widow of Lindley H. Livingston, who was A.R.’s brother.

After he sold his grove, Livermore, who was 59, retired from farming and he and his wife devoted their time in Homestead to social activities and his duties on various boards. They attended social events at the Coral Gables Golf and Country Club, the Homestead Golf and Country Club, events sponsored by the Homestead, Redland and Princeton Women’s Clubs, the Redland Pioneer Guild and the American Legion. Their lives revolved around an active social schedule that included teas, dinner and bridge-playing parties.

The story of Elliot P. Livermore is one that is common in the history of this area. He came to Miami in 1916 with few assets, became very wealthy and went back home in 1930 not as wealthy due to the Depression but still well-off. He was here for only 14 years and left no one who knew much about him. His children never lived here – they stayed in New England. His brother, Jesse L. Livermore, who probably financed many of Elliott’s business ventures, went bankrupt at least four times and ultimately committed suicide in New York City on November 28, 1940. Jesse’s biography makes for fascinating reading. The only lasting mark that Elliott P. Livermore left on South Dade is Epmore Drive and virtually no one knows why the road is so-named.
______________________________________________________________________