Last December, Mike Emery, who is writing a book on the Coca-Cola Bottling Company in Florida, contacted the Town Hall Museum, asking what information we had about the Coca-Cola bottling plant here in Homestead. We have almost nothing – only the location of the plant, but Mike’s query led me to keep his request in mind. At the end of January, as I was browsing our recently digitized newspapers, I found an article that mentioned the Princeton Bottling Works, which Mike had mentioned in our initial exchange. He and I worked together, sharing information, and I uncovered a previously untold story about Homestead and Princeton, of which there are thousands more to be told.

Many do not know that homesteaders lived in the area that became Princeton before Gaston Drake decided in 1907 to locate his sawmill there. It was a thriving community until 1921, when Drake, having cut all of the merchantable pine trees in the area, shut down the mill and moved his business to a 100,000 acre tract north of Palm Beach to cut more trees. In an article that appeared in the September 19, 1913 issue of the South Florida Banner, it was noted that “Princeton is to have a bottling works establishment and ice house. C. M. Wade is having a building erected where he will install machinery for bottling works.” His company was known as the Waid Bottling Works. 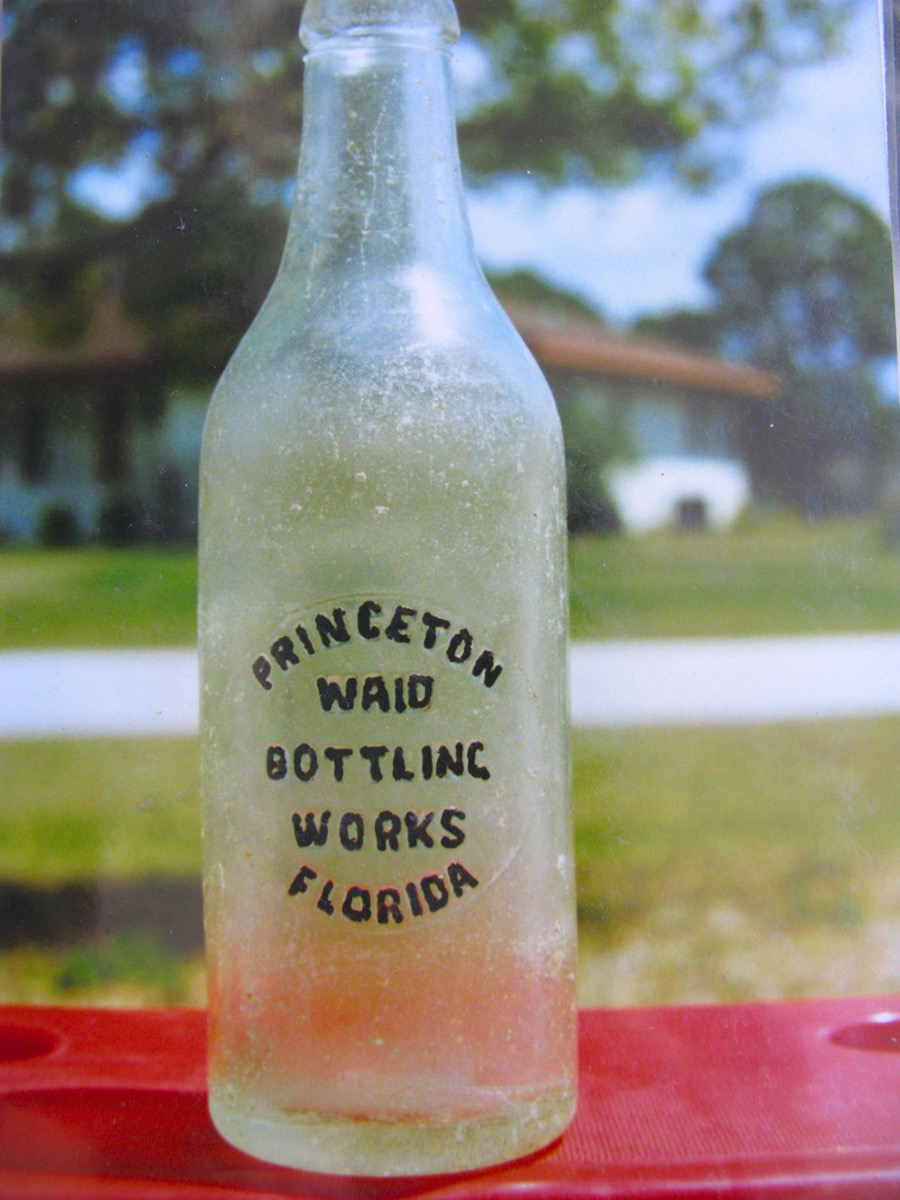 The more I dug into the story, the more fascinated I got with it. Mike was very helpful and I could not have written this article without his help.

The Waid Bottling Works was established in Princeton in late 1913 by Charles M. Waid, who was born in December of 1866 in Virginia. Early in his life, his parents moved to Collin County, Texas, where the family appeared in the 1880 census. In the 1900 census, Charles and his wife, Emma, lived in Maple Township, Canadian County, Oklahoma with their daughters, Mildred Emma, born on March 20, 1893 and Beulah, born in November of 1898.

According to the obituary for Mildred E. Waid Caves, her family came to this area in 19091 when she was 16. She soon became a teacher at the Redland School, located on the grounds of what is now the Redland Fruit and Spice Park, until her marriage to William B. Caves, Sr. on August 27, 1913. The ceremony was held in the Guild Hall, located at Bauer and Redland and was presided over by Rev. Joseph A. Kahl. Rev. Kahl’s wife, Harriet, was the daughter of Charles H. Woodbury. His role in this story will be revealed later.

Due to a lack of bottles, the Waid Bottling Works did not open until February or March of 1914. In an article that appeared in the Miami Herald on April, 3, 1914, it was noted that Mrs. C. M. Waid was in charge of “pop” for the 3rd annual May Day Festival, held on May 1, 1914. The event, which was first celebrated in 1911 at the Redland School, later became a fund-raiser, held at the Guild Hall, for the South Dade Cemetery Association, which owned the Palms Cemetery, now known as Palms Memorial.

It seems that very early on, Charles Waid hired the Hair brothers, Earl Robert (born in 1884) and Zollie E. (born in 1889) to work for him. They had probably arrived in South Dade in late 1912 or early 1913. By August of that year, they were living on land bought from John Leonard northwest of the Hainlin sawmill. Leonard had homesteaded at Hainlin Mill and Tower Road (S.W. 216 St. and 192 Ave.) in 1907. The Hair brothers were hard workers, as by August 20, 1914, it was noted in the Homestead Enterprise that “T. F. Christenson makes three trips a week to Princeton delivering ice for the Hair Brothers and also delivering their sodas. These boys are doing a hustling business in the bottling works at Princeton.”

By 1915, Charles M. Waid had sold his business to the Hair brothers because an advertisement in the Homestead Enterprise gives the name of the business as the Princeton Bottling Works. 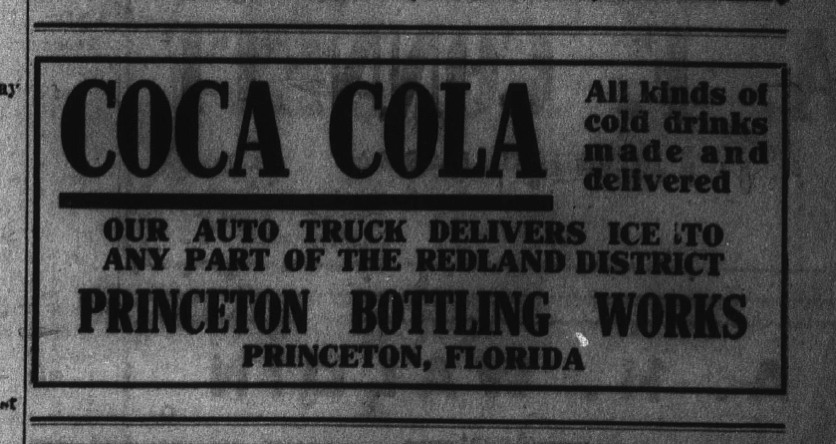 The Princeton Bottling Works was the supplier of soft drinks to the May Day festivities in Redland on May 1, 1916 – their bill was for $14.00. That doesn’t sound like much but it is equivalent to $315 today.

In addition to his duties at the bottling works, Zollie Hair managed to find time to be the vice-president of the Princeton branch of the South Dade County Fruit Growers & Truckers Association in January of 1915. In February of 1916, he ran for sheriff of Dade County. In an advertisement for his campaign, he bragged that he had a “half interest in a growing and paying business in Princeton.” 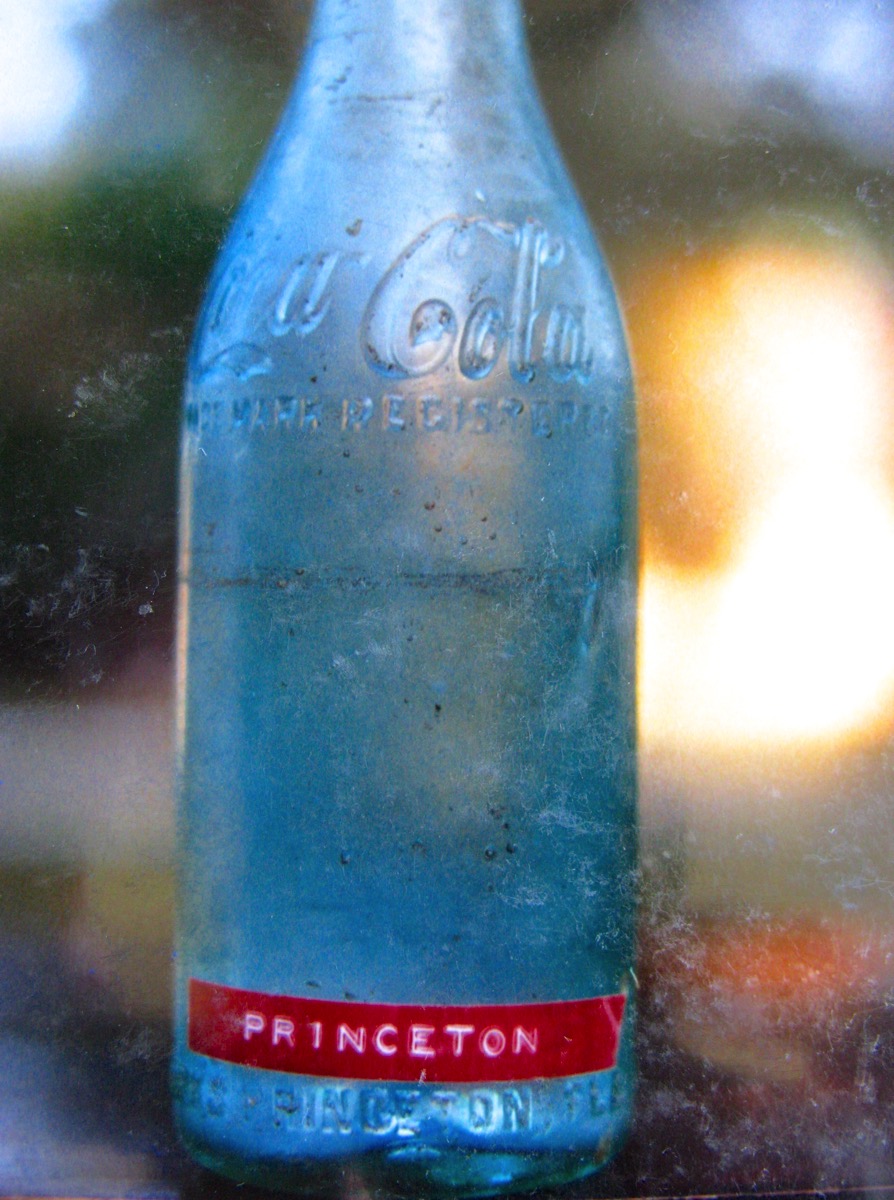 Zollie lost the election, but that didn’t slow him down. He was making trips to Los Angeles, California and starting to grow potatoes in Okeelanta, on the Fort Lauderdale canal near Lake Okeechobee.

In June of 1917, he and his brother sold the Princeton Bottling Works for $8,000 ($179,000 now) to J. J. Degan, “a wealthy wagon manufacturer of Ft. Madison, Iowa” who was brought to them by I. R. Matthews, a brother-in-law of Rev. J. A. Kahl. Apparently, Zollie was still involved in the bottling business in September of 1917, when he registered for the draft in Princeton. On that form, he gave his occupation as a self-employed bottler of soft drinks.

He celebrated the sale by going to Miami and buying a new Dodge car. But in January of 1918, he and his brother were sued for $7,500 by Mr. Degan and his partner, who alleged that the Hair brothers did not have a contract with the Coca-Cola Co. for syrup. Perhaps there was a contract, but it is possible that Degan did not do enough due diligence to determine the expiration date of the contract. The outcome of the suit is not known. Degan continued to own the business and in August of 1919, he leased the business to John Dorsey, a brother of J. R. Dorsey of Homestead. John purchased a 2-ton Indiana truck from the Homestead Garage to use in his business.2

In an article that appeared in the May 20, 1920 issue of the Homestead Enterprise, it was noted that “Wendell Woodbury bought out the Princeton Bottling Works last Monday and has taken over their business of supplying the Redland district with ice.” Wendell Woodbury, a son of Charles H. Woodbury, was another brother-in-law of Rev. J. A. Kahl.

The bottling equipment from the former Princeton Bottling Works was moved to a building on South Flagler, opposite Hector Supply, where the Homestead Ice Cream and Bottling Works opened for business in October of 1921. 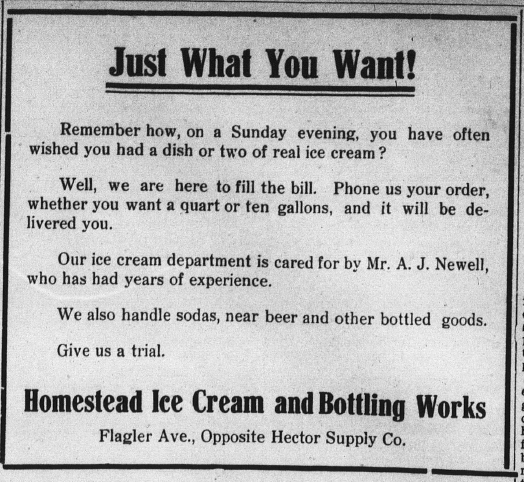 The memories of men are too frail a thread to hang history from.