The building which once stood on the southwest corner of Krome and N.W. 1st Street was built in 1921 by J. W. Conner for Archie J. Campbell, one of Thomas Alexander Campbell’s sons, for whom Campbell Drive is named. It is pictured in the photograph at the top of this page, next to the Citizens Bank Building.

Lack of room in their present quarters and the ever-present danger of fire, along with their confidence in our town, were the primary causes for the erection of the new Campbell Furniture Co. building. The proprietor, A. J. Campbell, has for several years owned the lot occupied by the Citizen’s Bank, and on this he intended to build. When the bank was built, he “swapped” for his present location, and now is realizing his ambitions to build a home for the Campbell Furniture Co. which he could take pride in.

The building which covers a space of 50 x 80 feet is being built of tile, and two stories in height. Mr. Campbell intended at first to only build one story, but when the opportunity came he decided on two. The second floor will be occupied by the offices of Dr. J. E. Shields and Dr. J. A. Smith, each having three rooms. The balance of the second floor will not be completed for the present, but used as store space.

The corner store, 25 x 80 feet will be taken by the Seminole Pharmacy. Complete sanitary fixtures are being installed for the soda fountain, and the location, just opposite the Citizens Bank, will be a vast improvement over their present stand.

The contract on the Campbell building is held by J. W. Conner, who has a number of buildings locally to his credit.

A floor plan of the building will be found on page four. 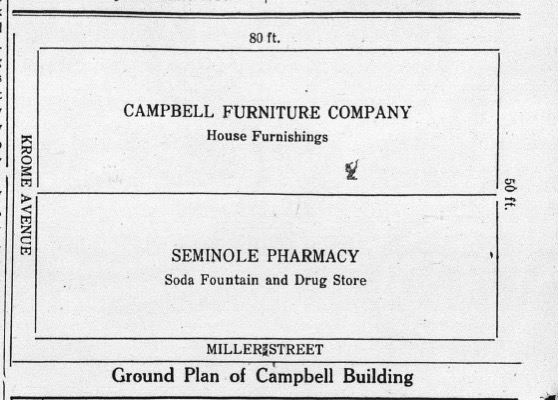 The building was constructed of hollow clay tile, the same material that the J. D. Redd building (1922), soon to be razed by the City of Homestead, was built of. 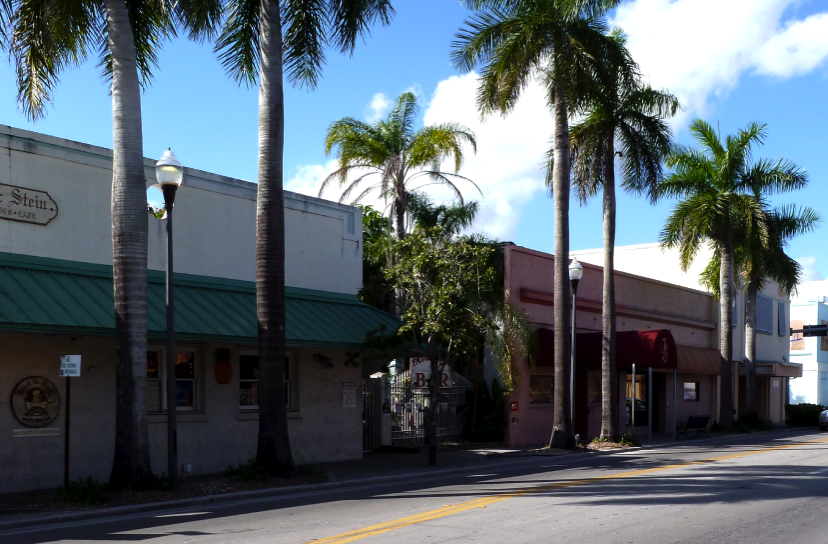 The J. D. Redd building is in the middle – the pink building – between Stick & Stein and the former Bank of Homestead building

Archie Campbell’s furniture business was on the ground floor on the south side of the building and the Seminole Pharmacy was on the north side. The Campbell Furniture Co. was purchased by the Gulf State Furniture Co., owned by M. C. Smith of Miami, in April of 1923. The store, the second one in a chain which would eventually number nine stores, held its grand opening on May 25, 1923. On June 20, 1927, the Gulf State Furniture Co. went into involuntary bankruptcy and was liquidated. Its assets were distributed to other furniture stores in Miami and the building in Homestead was shuttered. The Seminole Pharmacy later became Doc Brown’s drug store. 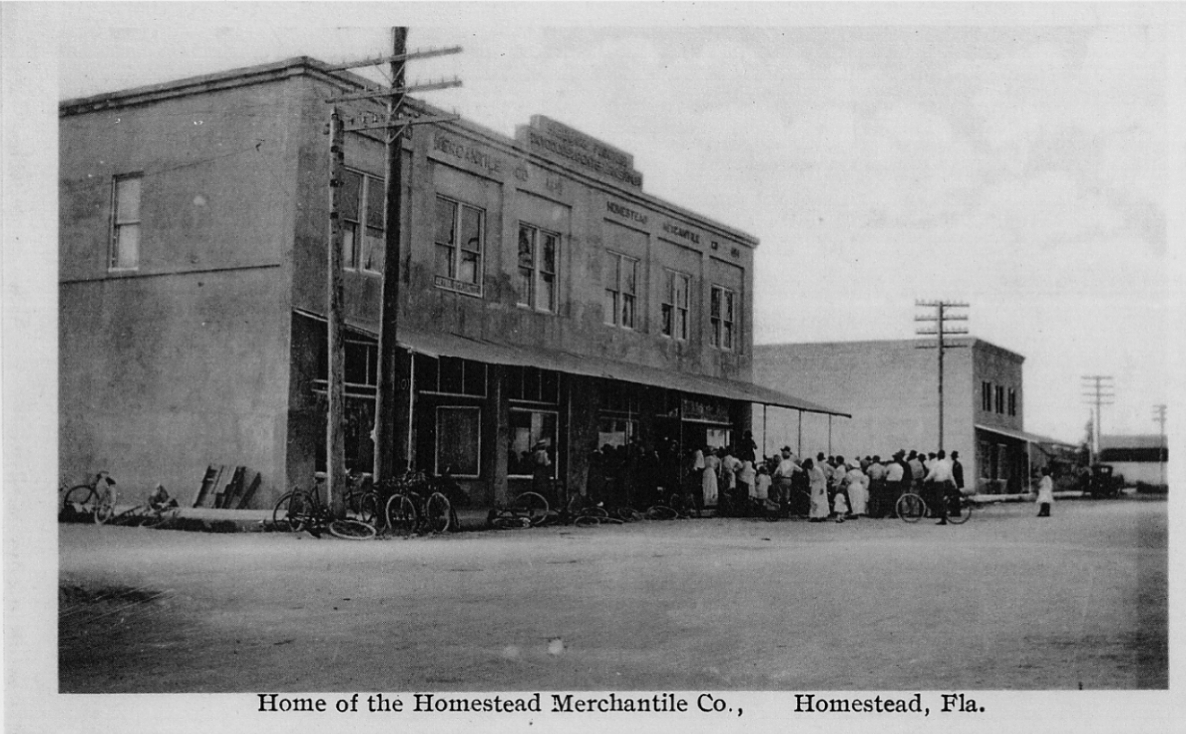 A photograph of the Campbell Bros. Furniture store in later years, when it was the location of Brown’s Drug Store. The photograph was taken by Ed Oberlies of the South Dade News Leader: 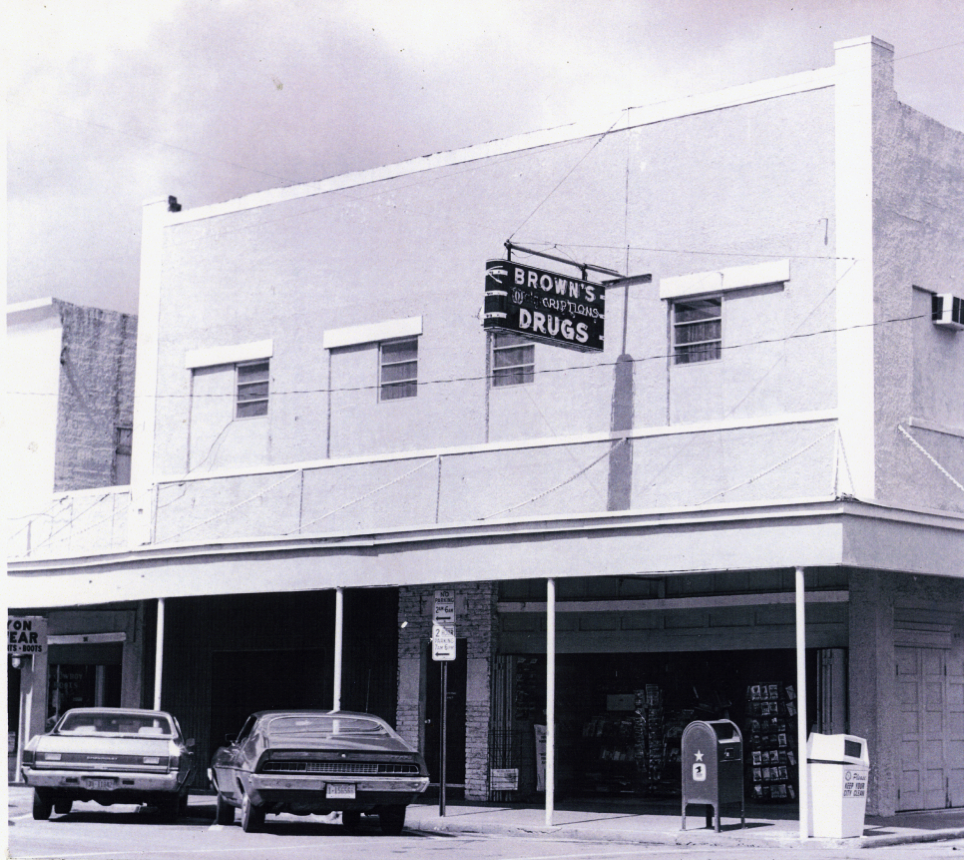