After David Torcise performed his magic with the original homesteads in South Dade, I discovered Krome’s 1903 Cape Sable Expedition Survey and wondered if it might be possible to overlay it on a satellite view of the area. Sure enough, David was up to the challenge and he produced a wonderful creation. I’ve uploaded his effort and it is available for viewing by clicking on “Krome Survey Overlaid on Google Earth” beneath the image shown below in this post. Again, you must have Google Earth installed on your computer to be able to view the file.

What I found so amazing is how well Krome’s survey matches the current shoreline in the Cape Sable area. In 1903, his men were challenged by high water levels, dense vegetation and ferocious mosquitoes. Yet, they created a survey that closely matches what a current satellite view shows. When you look at the overlay, you will notice that the further you go away from the Flamingo area, the poorer the “fit” between the two views is. This is because Krome’s survey is two-dimensional and a satellite view is, of course, three-dimensional, incorporating the curvature of the Earth. 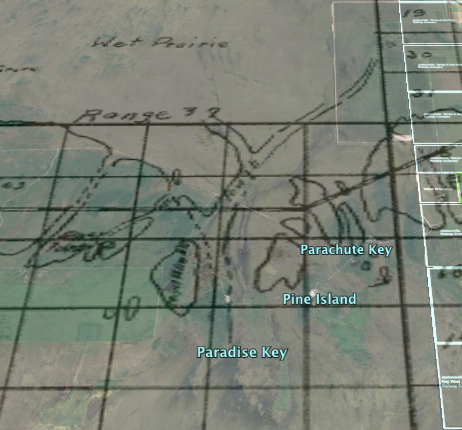 I asked David to create a “snapshot” of the Paradise Key area, which he obligingly did. Again, you will notice how well Krome’s survey matches what exists on the ground.

Flagler ultimately decided to build the Key West Extension through the Florida Keys instead of to Cape Sable and then to Key West, but the proposed route through what is now Everglades National Park is interesting to see when it is overlaid on a satellite view of the terrain.