↓
Home→Architecture→History of the Homestead Town Hall

The Town of Homestead was incorporated on January 27, 1913 but its officials had no municipal building in which to meet. They met at two different buildings before the Town Hall was built in 1917: Tatum’s Real Estate office on Railroad Avenue or in Sistrunk Hall, which was a wooden building located just west of the Bank of Homestead building at the southwest corner of Mowry and Krome. 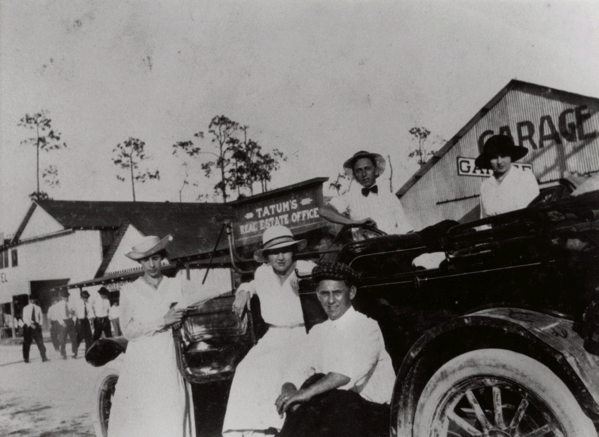 Sistrunk Hall was built in May of 1912, shortly after construction began on the Bank of Homestead building in March of that same year. It was built by Edward A. Sistrunk, who was from White Springs, Florida. He came to Miami as early as the winter season of 1905, where he was a “special police” officer at the Royal Palm Hotel. In 1906, he hired on with the City of Miami as a police officer.1 In January of 1907, he married Eva Lenora Carter2 and in the summer of 1909, he came to Homestead.3 His wife was a member of the Homestead Sewing Circle (the predecessor to the Homestead Women’s Club) in 1912 and he was a Marshal, along with Oscar Thomas, of the Town of Homestead in 1916.4 Sistrunk Hall was where various fraternal orders, churches and community groups met and it also had a movie theater which pre-dated the Seminole Theater. Sistrunk Hall, like so many other wooden buildings of that era, burned down in the early morning hours of August 31, 1916.

William J. Krome, representing the owners of the Commerce Addition, proposed a location for the new Town Hall on Krome Avenue north of Mowry.5 The Commerce Addition had been surveyed by Richard L. Bow, the son of Lily Lawrence Bow and platted by William J. Krome on September 30, 1914. Another group, headed by George W. Hall, proposed a location in the 250 – 400 block of S. Krome Ave. That location was part of his Hall’s Addition to Homestead (Miami-Dade County plat book 3, page 73). There was a considerable amount of time devoted to discussing the location for the new town hall before the Council narrowed down their options to either lots 7 and 8 ($700) or lots 11 and 12 ($600) of Block 1 of the Commerce Addition. By a vote of 4-3 on February 7, 1916,6 the Council decided to build the new Town Hall on lots 7 and 8 of Block 1 in the Commerce Addition. $300 towards the cost of the lots came from a private party, reducing the cost to the town to $400. 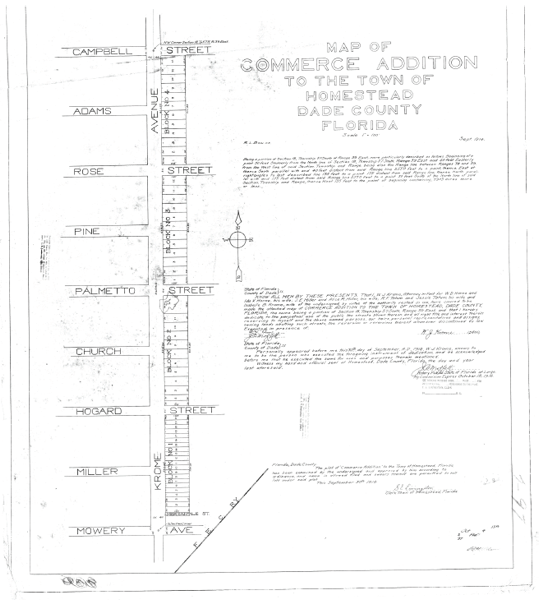 The owners of the property were William J. Krome and his wife Isabelle, W. D. Horne and his wife Ida V., J. E. and Alice R. Miller, and Russell F. and Jessie Tatum. Russ Tatum was the first mayor of the Town of Homestead, a lawyer and the owner of a real estate company.

In early August of 1917, George W. Hall sold his property in the Homestead area, consisting of 6 homes, 14 vacant lots and 40 acres of land in the Redland to Charles H. Woodbury for $22,0009 to Charles H. Woodbury. Woodbury was the father-in-law of Rev. Joseph A. Kahl, who founded the South Florida Banner, Homestead’s first newspaper, in 1912.

The new Town Hall building was designed by Harold Hastings Mundy, who was born in 1878 in Ontario, Canada but never became a naturalized U.S. citizen. He died in 1932 and is buried in the Hamilton Cemetery in Ontario, Canada. Mundy designed the addition to the Trinity Episcopal Church in Miami in 1923, the grandstand for the old Miami Baseball Stadium, Coconut Grove Elementary, Robert E. Lee Junior High and Miami Edison High Schools and numerous other buildings in Miami. He also designed the addition to the Homestead High School in 1925.10 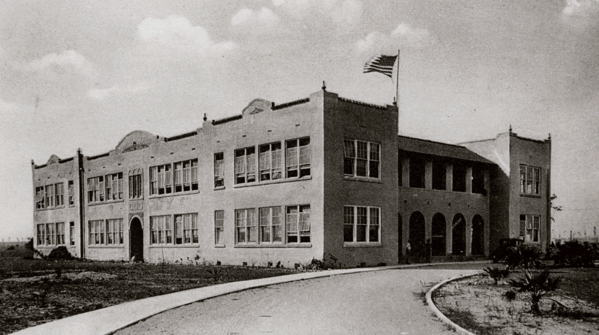 The contract to build the town hall, costing $4,418, was awarded to John F. Umphrey on February 5, 1917. If the Town wanted doors on the building, the cost was an extra $815.11 He was the low bidder, having come in below a bid from a Miami company for $5,600 and a Florida City company for $6,574. Umphrey was a local contractor who built a number of local buildings, including what is now known as Neva King Cooper School. Two buildings that he built that have been demolished were the George W. Hall residence at 304 S. Krome Avenue, the first California Mission Bungalow built in 1916 and Homestead High School, demolished in the early 1980s.

The Town Hall building was mostly completed by August, according to an article that appeared in the August 16, 1917 issue of The Homestead Enterprise, but it did not have a septic tank yet. Fred Gidloff was awarded the $275 contract for the septic tank on December 3, 191712 and completed it in early April of 1918.13 The lack of sanitary facilities didn’t stop town officials from moving in, however. Business was conducted in the new town hall from early September, 1917 on. The first floor, where the fire truck is now on display, housed the fire and police departments. In the rear of the building were four jail cells – two on each side of an east-west corridor. The two on the north side were for White men and the two on the south side were for Black men. There was a separate wooden building in the parking lot behind the Town Hall that housed female prisoners.14 The second floor was where the municipal offices were located. 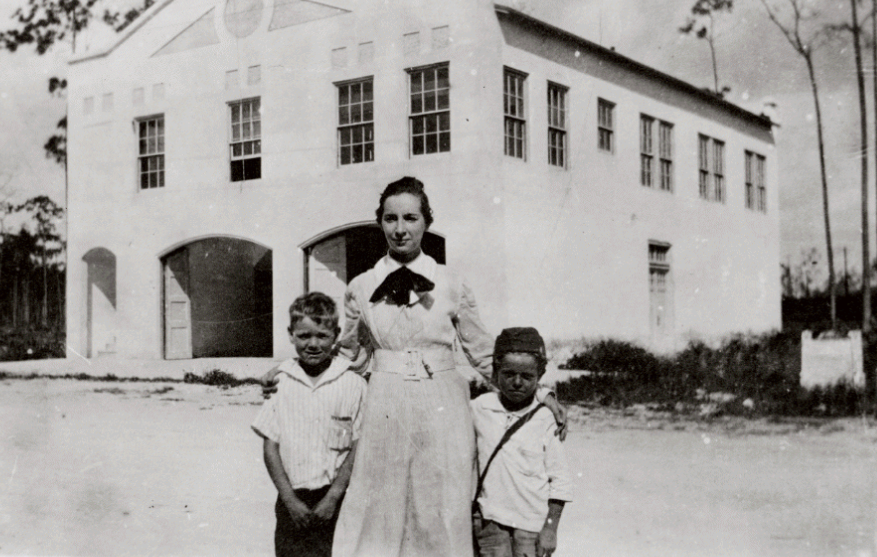 In 1956, the Town Hall was remodeled after two city departments moved out. The police department moved to its new quarters just east of the municipal power plant. That building now houses the Homestead Utilities offices. The fire department moved to its new building on N.W. 2nd St. between N.W. 3rd and 4th Avenues. The jail cells were removed and the bottom floor was turned into office space for the growing city government. 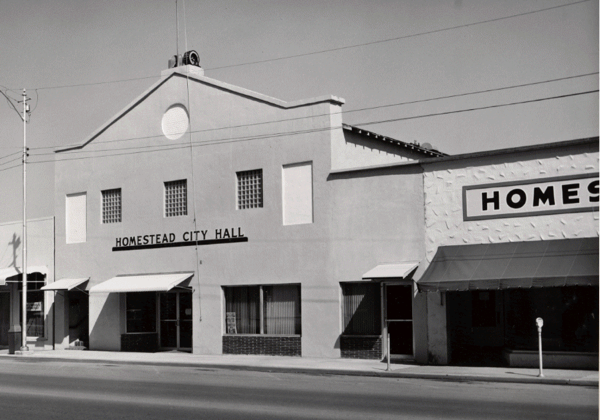 The Town Hall served the needs of the residents of Homestead for almost 60 years. A new city hall, which had been in the planning stages since 1964, was built at 790 N. Homestead Boulevard in 1975. Edward M. Ghezzi, a well-known Miami architect who had moved to Homestead and had an office in the Redd Building (1922), designed the new city hall after being awarded the contract to do so in November of 1973. Ghezzi also designed the Shark Valley overlook in Everglades National Park. The official dedication of the new city hall was on November 23, 1975. The bas relief mural on all four walls of the building was designed by Albert Vrana (1921-1994).

After the city vacated the old building, it was used as a senior citizen center and an office for the State of Florida’s parole and probation office until 1980, when the City of Homestead, at the behest of local merchants on Krome Avenue who wanted more parking, decided to demolish it. The vote on February 4, 1980 in favor of accepting $20,083 in federal funds to demolish the building was 4-2, with Mayor Nick Sincore and Councilmen Bill Dickinson, Bill McConnell and Tommy Wilson in favor and Irving Peskoe and Ruth Campbell in opposition. Councilman Watler Rutzke was absent. Those in favor of demolition claimed that a new building, to be built in Musselwhite Park for $60,000, would replace the space that the senior citizen center occupied and which would be lost by demolishing the old City Hall.15 Little thought was given to the history of the building. This decision resulted in a furious opposition movement, led by Peskoe and Campbell, which garnered donations of about $61,000 from the community and a State grant of $173,363 for the restoration of the building. Those community members who donated more than $250 are honored on an “Above and Beyond the Call” plaque mounted on the wall on the left side of the entrance to the Museum. The tiles on the wall, with the contributor’s names on them, honor those who contributed up to $250 towards the project. 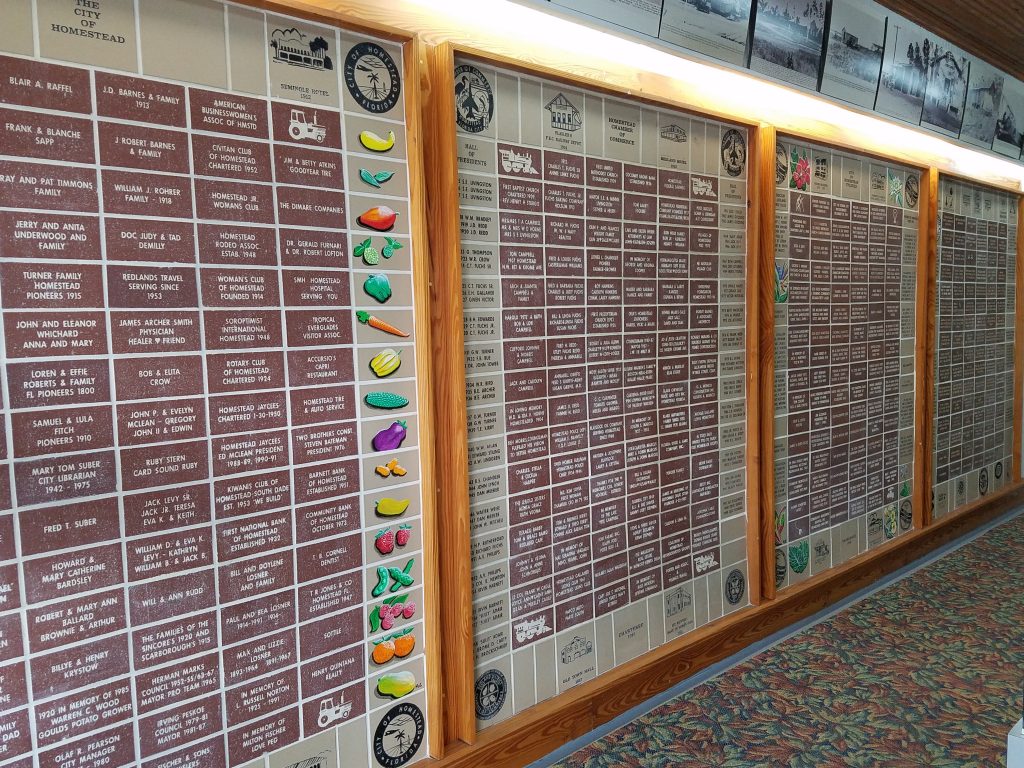 J. Robert Barnes, a Homestead architect whose family came here in 1919, was the architect of record for the restoration project, which was finished in late 1994. The Town Hall Museum opened shortly thereafter. 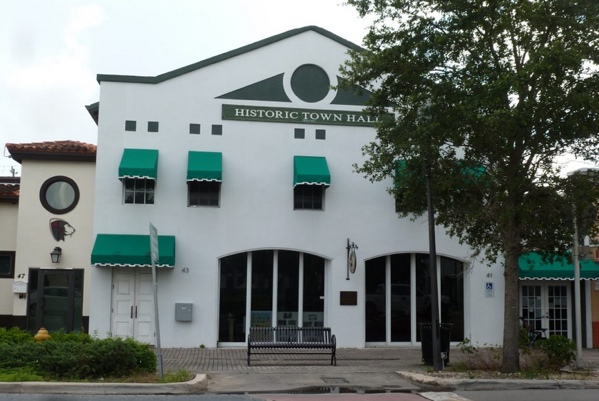