Piecing together the small number of remaining fragments of early Homestead history is quite a challenge. I’m writing this post to show how, sometimes, we historians are fortunate to be able to build on the knowledge contributed by others and are thus able to advance our knowledge of the history of Homestead.

The Florida Pioneer Museum owns the postcard that is the subject of this post. 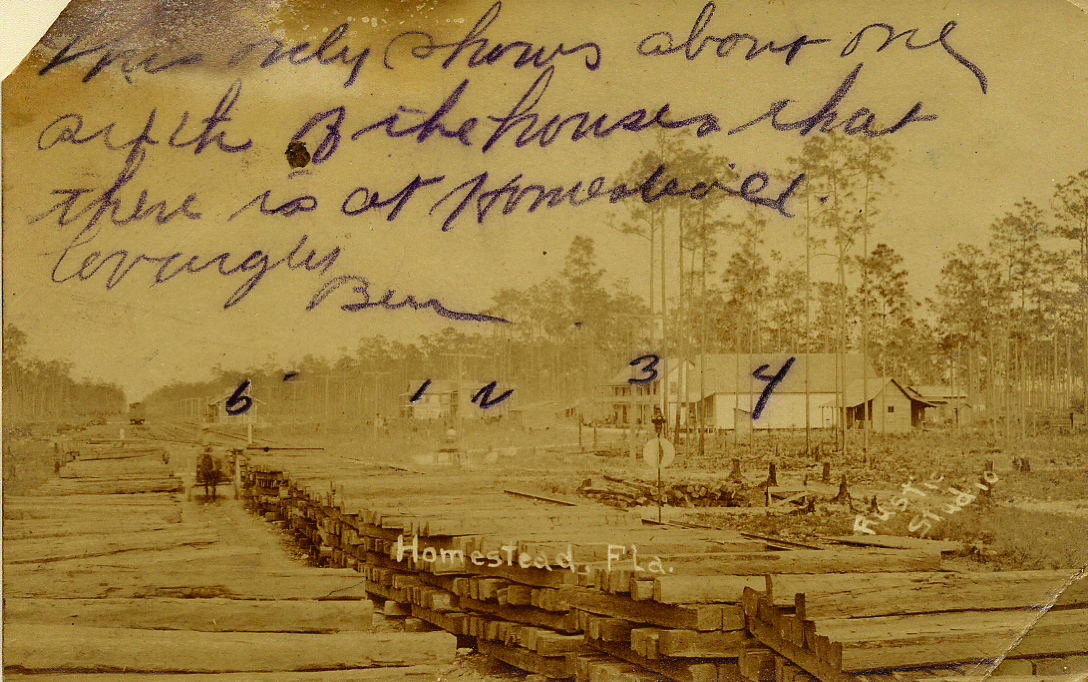 “Duval’s store” refers to that of Alfred T. Duval, who was born in Mississippi in 1846. In 1900, he lived in Cutler, where his nearby neighbors included Colonel Obadiah Boaz, a member of the 1903-1904 Krome Cape Sable Expedition and William Fuzzard, a pioneer resident of Cutler. In the 1910 U. S. census, Duval was enumerated as a “general merchant” in Homestead. In September of 1911, Duval added to his store by “putting up a post office building and will put in new lock boxes and furniture.” He had been appointed Postmaster of Homestead on May 11, 1909, taking over from William D. Horne. At that time, he moved the post office from Horne’s hotel and general store to his own store on Railroad Avenue. Alfred was one of the electors who voted to incorporate the Town of Homestead in January of 1913. He died in Miami in 1936 and is buried in the Miami City Cemetery.

“Free’s” refers to the store erected by John Ulric Free, an early homesteader in the area who claimed a relinquished homestead on November 7, 1907. It had previously been claimed by two women and a man. One of the women was Nellie Budge, the sister of Harry Budge, a prominent Miami merchant.

“Evans Hotel” refers to what is now called the Hotel Redland. Tom and Floretta Evans claimed their homestead on July 22, 1909 and paid cash for it on April 18, 1910 but they were in the Redlands before March 27, 1908, when they attended a going-away reception for Colonel O. Boaz and his family at the Charles Plummer residence, along with 56 others.1 W. D. Horne purchased lot 5, block 2 of the Town of Homestead in 1904 and started building a hotel on it that October.2 It is shown in early photographs as The Homestead Inn before it burned down on November 10, 1913.3 The Ladies Guild of the Redland church held a pie social at the Evans Hotel the last week of December, 1910.4 In May of 1911, the Evans moved back to their homestead after operating the Homestead Hotel during the prior winter season.5 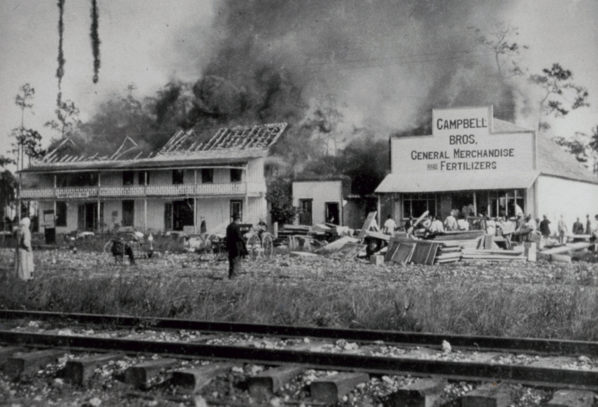 Courtesy of the Historic Homestead Town Hall Museum
“store” is the Campbell Bros. general store, owned by Thomas A. and Neal W. Campbell,6 located adjacent to the Homestead Inn on what was then Railroad (now Flagler) Avenue. They had built their store in July of 1908.7

“F E C Depot” is the Homestead Depot, located at the intersection of Third Street and Railroad Avenue on the east side of the railroad tracks (now the busway). Fourth Street is now N. E. 2nd Road. 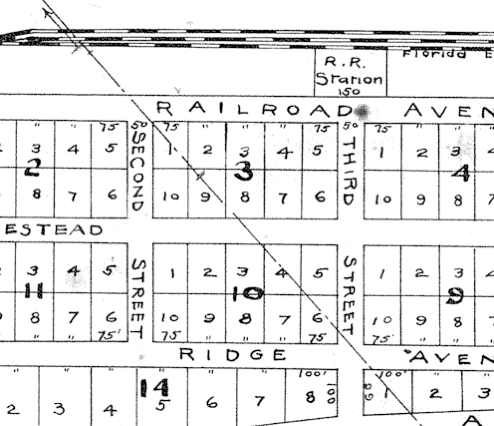 Location of the F.E.C. Depot in Homestead

When we turn the postcard over, we see this: 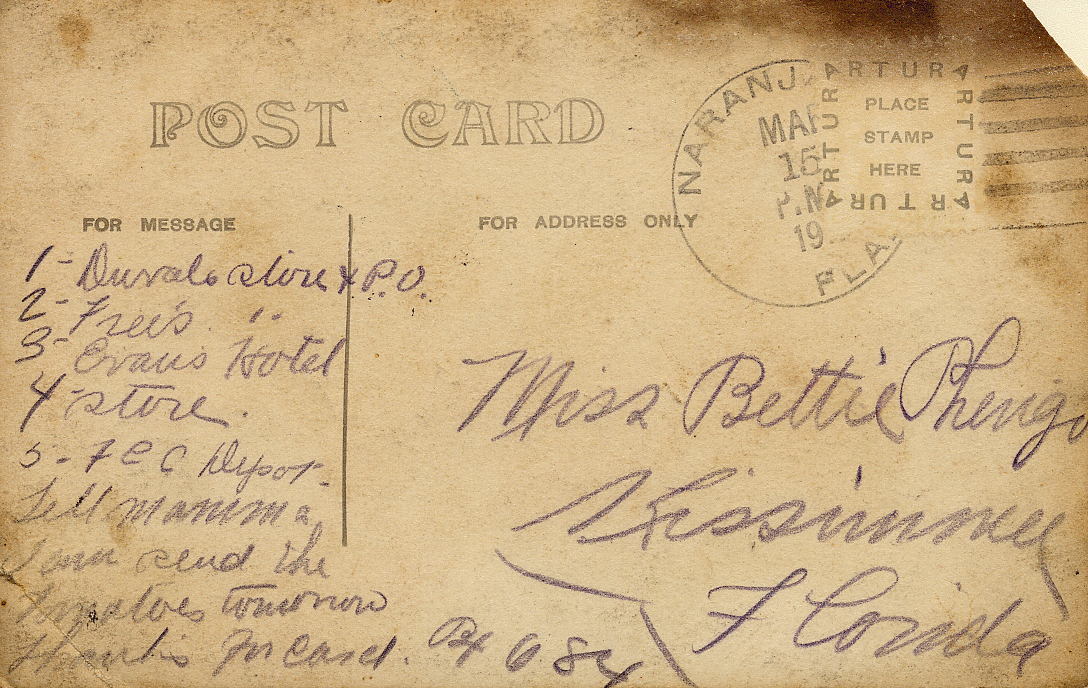 First, note that the postcard was postmarked on March 15, 19– in Naranja, not in Homestead. The community of Naranja was platted by George W. Moody in 1912, but he was appointed postmaster of the Naranja Post Office in January of 1906. Very little has been written about the history of Naranja, but it was a thriving community up into the early 1930s.

If we turn the postcard back over to the front, we read this: “This only shows about one sixth of the houses that there is at Homestead. Lovingly, Ben.”

The postcard was sent by Benjamin H. Pherigo to his younger sister, Elizabeth. He asked his sister to “[t]ell mamma I will send the tomatoes tomorrow. Thanks for card.”

Ben was very likely working in one of the packing houses in Naranja and on one of his trips into Homestead on a rare day off, he purchased this postcard, which may have been created by the unknown photographer who owned the Rustic Studio, pictured in the lower right side of the postcard, next to the Campbell Bros. store.

The first issue of the South Florida Banner, dated March 15, 1912 and owned and edited by Rev. Joseph A. Kahl, tells us this about Homestead: “Fifteen months ago it had little more than the railroad station. Now it has six general stores, two hotels, one restaurant, three blacksmith shops, one bicycle repair shop, lumber yard, four packing houses and work on a new bank building has just begun.”8 “Fifteen months ago” would have been in October of 1910. Given that Reverend Kahl did not arrive in Homestead until early 1912 (he was appointed to the Methodist circuit for Detroit in January of 1912), he had no direct knowledge of the conditions in Homestead prior to his arrival then. But he did have every incentive to contrast the allegedly primitive conditions in 1910 with the bustling place that Homestead was in 1912 so that he could sell more copies of his newspaper. By counting names in the 1910 census, it is clear that Homestead was a much more populated place than what Kahl related in his article. There were 261 people living in precinct 15 (Homestead) in 1910 and no doubt over 300 by 1912. Precinct 15 did not include Silver Palm (precinct 12), Princeton (precinct 13) or Redland (precinct 14).9

John Ulric Free did not arrive here until the summer of 1907, at the earliest. Alfred T. Duval was here at least as early as November 4, 1904, when the Miami Metropolis reported that he had badly injured himself with an axe “south of Homestead” and had to be transported to Cutler and then to Miami for treatment.10

A. T. Duval was the first purchaser of a lot in the Town of Homestead – he bought Lot 1, Block 4 from the Model Land Co.11 12 However, he did not build on that lot until late in 1907.13William D. Horne purchased lots 5 and 6 of block 2 in the newly-platted Town of Homestead in 1904 from the Model Land Company.14 Horne’s lots had the advantage of having road frontage on Railroad Avenue and Second Street – see the plat above – but Duval’s lot was on Railroad Avenue right across the street from the depot. Horne finished building his store in December of 1904. He subsequently sold his business to Robert E. “Eb” Caves (Horne’s brother-in-law) and went into the real estate business. Caves then sold the business in 1907 to A. T. Duval, who moved it to his store across from the Depot.15 His building also included a meeting room, known as “Duval Hall,” where dances were held.16 Duval, who was from Cutler, sold out after January of 1913, when he was one of the residents to vote for the incorporation of Homestead, to an unknown person and moved back to Cutler, where he had property. On August 3, 1916, the Homestead Enterprise noted that “A.T. Duval, an old Homestead resident, was in town last week on a visit.” In 1920, he, his wife and his two daughters were enumerated in Miami in the census taken that year.

J. U. Free built a store on Railroad Avenue in 1908.17 Free’s first store was located on Lot 5, Block 3 of the Town of Homestead – see the plat of the Town of Homestead above. After being in business for a few years, Free sold his store in late 1911 to Walter J. Tweedell18 and erected a new two-story concrete building on lot 6 of his Free’s Addition to Homestead. This building was on the west side of Krome, south of where the Bank of Homestead was built in early 1912 on the corner of Mowry and Krome.19 Tweedell placed an advertisement in the South Florida Banner on May 17, 1912, stating that he sold Star brand shoes. After Tweedell was elected to his first term as Dade County commissioner from Homestead in November of 1912, he spent less time at his store and more time attending to political matters. In 1915, he sold the northeasterly 35 feet of Lot 4, Block 3 to Jim Tosto,20 whose business was in the Tweedell Building as early as August of 1914.21 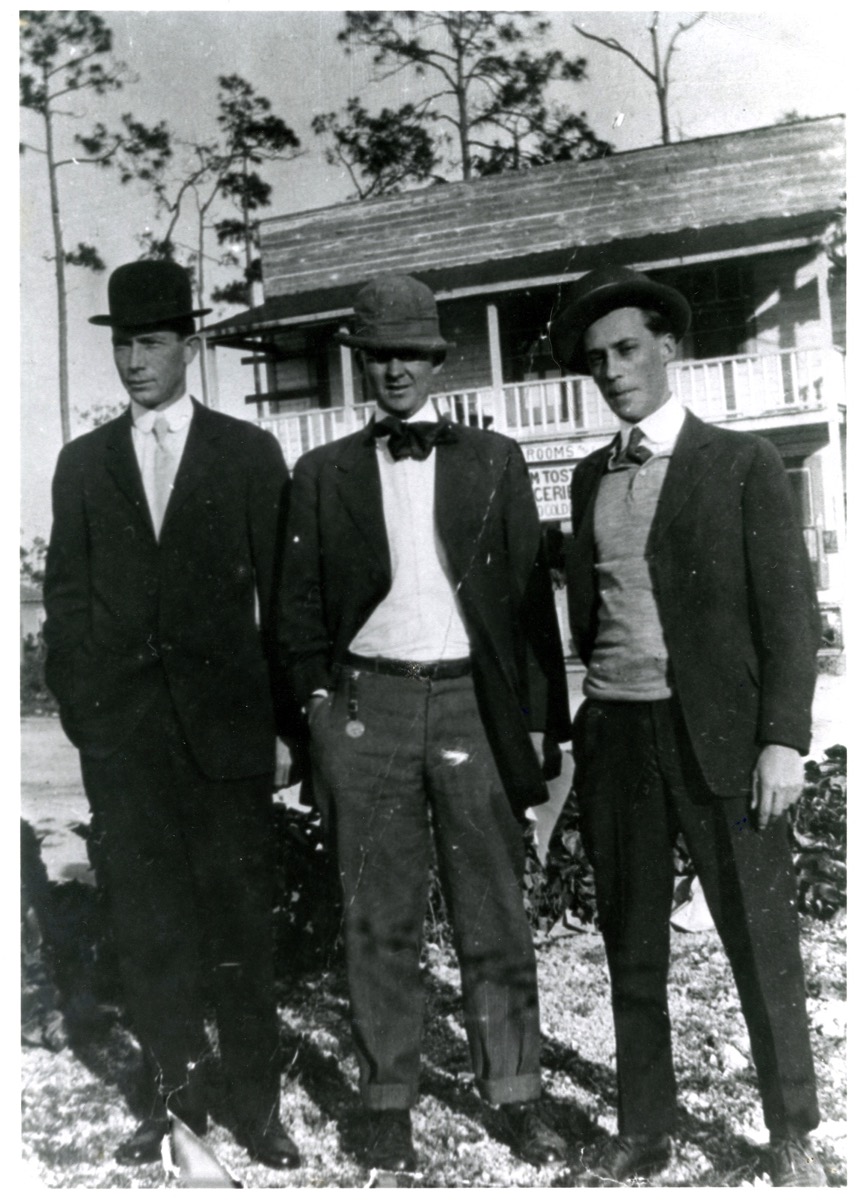 This photograph, with Jim Tosto’s store in the background, was taken after August 6, 1914, when Tosto first advertised in the Homestead Enterprise that he was a “Dealer in Groceries and Fruits, Tobaccos, Lunches and Cold Drinks” in the Tweedell Building.22 The location of this building is unknown. Standing, left to right, are James D. Redd, James R. Dorsey and Tom J. Harris. 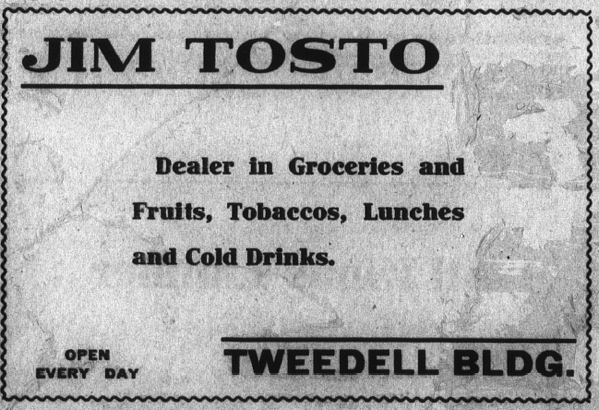 Benjamin H. Pherigo left no known mark on Homestead area history other than working in a packing house in Naranja before March 15, 1911, when he sent this postcard to his sister in Kissimmee. He was born on November 24, 1889 in Kissimmee and worked as a migratory farm worker. In 1916, he and three other Kissimmee men left for Fort Valley, Georgia, to pick peaches for the Hale Georgia Orchard Co.23 In 1918, he worked for James A. O’Berry in Rockdale, near present day Coral Reef Drive. At that time, he was married to Cora and had one child. In 1922, he and his wife called at the home of William T. Roberts, an old resident of Cutler.24 He was still living in the Perrine area in November of 1925, when The Miami Metropolis noted that “Ben Farigo” was visiting E. M. Green. In 1928, he and his wife lived in Mims, Florida.25 In 1935, he lived with his sister, Rhea, who was the postmistress of the Kissimmee post office, and was still a fruit-packer. In 1940, Ben and Cora were still living with his sister Rhea in Kissimmee. In 1960, he and his wife lived in Auburndale.26 Ben and Cora never seemed to have settled down – they moved around a lot, probably following their jobs as migratory farm workers.

Since its beginning, Homestead has been a transient community. People came here to better themselves and sometimes succeeded. Those who didn’t often left and went elsewhere. This reality has made telling the story of Homestead very difficult and biased towards those who owned the media and the businesses. But for every well-known figure in Homestead history, there are one hundred unknowns. Benjamin H. Pherigo was one of them – a hard-working man who never got into trouble, married, raised at least one child and then died in obscurity in Auburndale, Florida on November 15, 1977.

We would like to live as we once lived, but history will not permit it.