In Part I of this article, I provided some of the history of the area that became Detroit before 1910. As can be seen on the relevant portion of the F.E.C. Railway map below, the Model Land Co. owned most of the land in sections 24 and 25 of township 57 south, range 38 east. Its holdings are shown with diagonal lines: 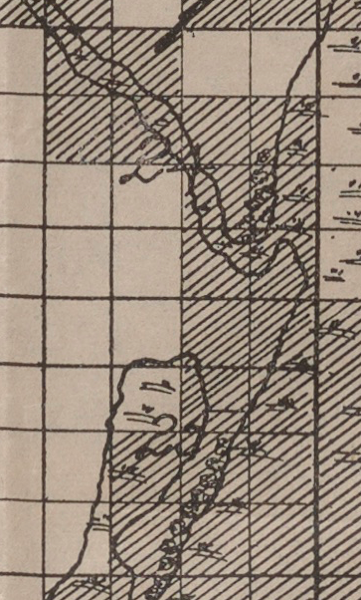 To make this clearer, here is a drawing that shows the holdings of the Model Land Co. in Detroit in light blue with the Brooker and Caves homestead claims in the west halves of sections 24 and 25 also shown: 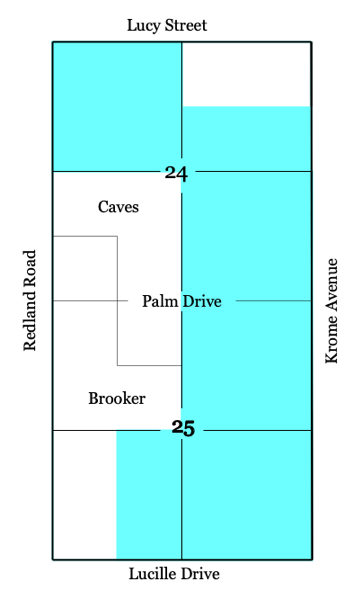 Henry Brooker, who had been in Miami as early as May of 1905,1 was hired by the F.E.C. to help build the telegraph line from Miami to Key Vaca. That line was completed on October 26, 1907.2

Henry Brooker and Jesse Scott Caves filed for homestead claims in the west halves of the northwest quarter of section 25 and the southwest quarter of section 24 of Township 57 South, Range 38 East. The balance of sections 24 and 25 (see diagram above), with the exception of the land claimed by Horace K. Roberts (the north half of the northeast quarter of 24), was owned by the Model Land Co. and was purchased by the Tatum Bros. Real Estate and Development Co. in May of 1910.3 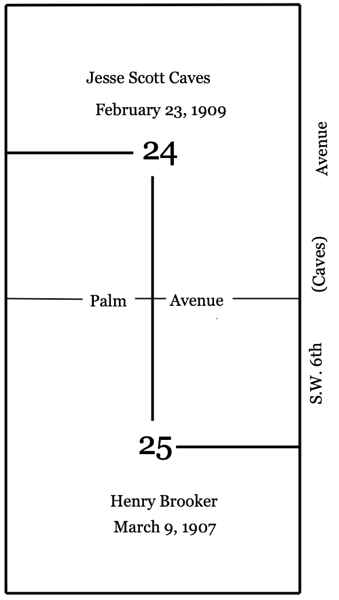 The Model Land Co., following the scheme used in the federal township-range system, subdivided their lands into parcels which started at the northeast corner of each quarter-section and proceeded to the southeast corner of the section in 10-acre blocks instead of the 640 acre blocks used by the federal government: 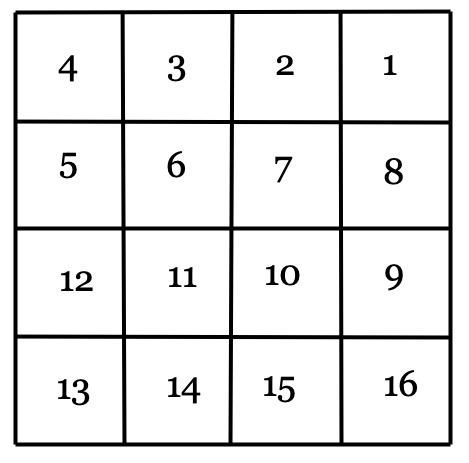 Jean Taylor, in her book The Villages of South Dade, wrote that William H. Hunter purchased a ten-acre plot of land and built a house in 1908 “at what later became the corner of S.E. 5th Avenue and S.E. 5th St. in Florida City.” Taylor meant to write S.W. 5th Avenue and S.W. 5th Street, for she went on to write that “Henry Brooker was their first neighbor, and soon the settlers from Detroit arrived, and the town grew up around them.”4 Hunter purchased lot 12 of the Model Land Company’s holdings in the northeast quarter of section 25, Township 57 South, Range 38 East, adjacent to and east of Henry Brooker’s homestead claim. When the Miami Land & Development Co. purchased the holdings of the Model Land Co. in what would become Detroit, that land became Blocks 36 and 40 on the plat of the Town of Detroit.

The plat of the Town of Detroit was recorded on November 19, 1913, about 5 years after Mr. Hunter purchased his land from the Model Land Co. 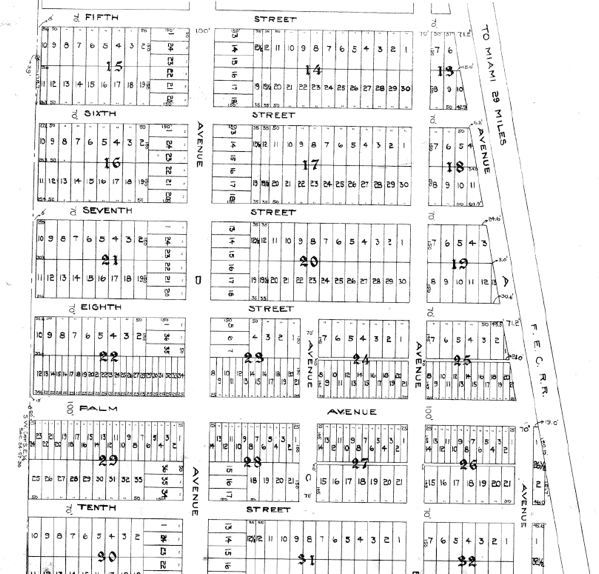 Plat of the Town of Detroit

Taylor went on to write that Hunter’s grove on his 10-acre plot of land was a failure but that he “was successful in growing tomatoes on the railroad land.”5 It is unlikely that Hunter farmed tomatoes in 1908 on his land. Instead, he grew truck crops on the marl lands east of the depot in Homestead, where he farmed 5 acres, along with A. T. Duval (15 acres), W. D. Horne (2 acres), T. A. Campbell (2 acres), Henry Brooker (10 acres), Leonard Mowry (10 acres) and Barney Waldin (5 acres).6 He also farmed “south of Homestead”7 during that season but the specific location was not noted.

On June 9, 1909, Hunter’s daughter, Ida, was married to Thomas F. Cochran of Miami at her father’s home in Homestead.8

Homestead claims west of what was to become Detroit were filed as early as 1905 and by 1909, there were 10 claims on both sides of the future Palm Drive west of the Model Land Co. property that became Detroit.

In February of 1910, Henry Brooker and William Hunter filed a report with the Dade County Commission that laid out the route of a public road from Homestead to Detroit. It ran from the south end of Homestead Avenue, one block east of Railroad Avenue, crossed the railroad at an unstated point,9 and ran between the railroad and the Everglades across the Long Prairie, between Homestead and Detroit. When it reached the section line that is now Palm Drive, it ran west to the Camp Jackson Road near S.W. 197 Avenue.10 This rough road opened up the country for the existing homesteaders and made it accessible to a large number of new homesteaders who filed claims in 1910 and later.

On September 15, 1910, the Homestead correspondent for the Miami Morning News-Record reported that “Harry Hunter, eldest son of Mr. W. H. Hunter of Homestead and his bride, formerly Miss Clara Bates, daughter of T. J. Bates of Miami,” had gotten off the train in Homestead and “were bound for the home of the groom’s parents, where a bountiful dinner awaited them.”11 Shortly after this time, Hunter moved to his new house in the settlement of Detroit, for on November 15, 1910, he told a reporter for the Miami Metropolis that he lived there and stated that there were “over one hundred citizens there now … and that within a few months, three hundred will make their home there.”12
While Hunter was claiming credit for being the first resident and also stating that there were more people living there than the 30 pioneers that Edward Stiling had brought on October 28, 1910, another man, Joseph L. “Lafe” Ishmael, had actually built a house there. In a letter dated December 24, 1910 to his home-town newspaper in Arkansas City, Kansas, Ishmael wrote:

“We were the first family in Detroit. We came August 18. I began to build September 15. Now there are 200 people here. There are eighteen small houses and about twenty tents. There are two grocery stores, one is in a tent. A hotel is going up and there is a contract for a packing house 40 x 100. There is a sawmill on the town site. We have a nice little house two nice porches, 10 x 28. We hold church services and Sunday school on our front porch and will until there is a church built. We are raising money now to build one.”13

Since Lafe made a point of mentioning that his was the first family in Detroit, it appears that other later arrivals, including Hunter, were claiming to be first. Lafe’s contemporary letter, dated December 24, 1910, sought to disprove those claims.

Joseph L. “Lafe” Ishmael was born in October of 1856 in Montgomery County, Illinois. There, he married Nancy S. Ford in April of 1877 and started a family. By 1889, he had moved his family to Arkansas City, Kansas.14 Arkansas City was a commercial hub in southeastern Kansas, 60 miles south of Wichita and 100 miles north of Guthrie, Oklahoma. Lafe held a variety of jobs, apparently working for the Atchison, Topeka and Santa Fe Railroad in Guthrie, Oklahoma, briefly owning a grocery store in Arkansas City in 1890,15 being a policeman for Arkansas City for several years,16 being a janitor, the sexton of the City cemetery and then returning to being a grocer again in 1905, when he partnered with Tom Tyler to open a grocery store named Tyler & Ishmael.17 In March of 1906, he bought out his partner and continued to run the business by himself.18

By December of 1911, William Hunter was reported to be in poor health.23 He died on May 20, 1913 at his home in Miami.24 His widow, who had married James K. Scott, died in 1942 in Florida City but her son Herbert stayed there after marrying Lola Nixon, a niece of Lilburn R. Nixon. A son, Herbert Milton Hunter, was born to them in 1925. In the 1970s, he operated Milton’s Hair Salon in Homestead.

Lafe Ishmael worked for the Miami Land & Development Co. supervising the development of the drainage canal network in the East Glade and also as a carpenter who helped build Rev. Joseph A. Kahl’s house.25 He moved to Homestead before 1916, where his wife was a nurse and a friend of the Kromes.26 In June of 1918, the Ishmaels moved to Miami,27 where Lafe operated a grocery store.28 In later years, Lafe Ishmael ran a hotel in downtown Miami. He died in 1936 and is buried in Woodlawn Cemetery in Miami.