Bryan Hastie Edwards,1 the third mayor of the Town of Florida City, served from 1922 until his death in August of 1934. In 1945, a municipal park was established on land the Town had acquired through tax certificates and named for him – the Bryan H. Edwards Municipal Park. It was located at the northeast corner of Arthur Vining Davis Parkway and the original Dixie Highway, then known as Flagler Avenue and now simply known as N.W. 3rd Avenue. 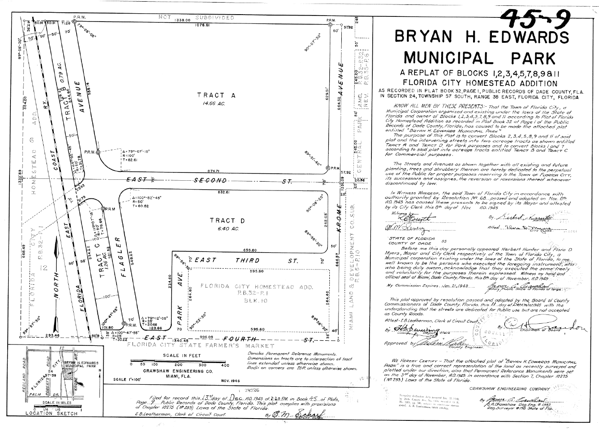 Sometime in the late 1970s, the park was converted to a campground for travel trailers and it continues to be used for that purpose to this day. The Capri Restaurant now occupies the building just right of center at the top of the photograph. 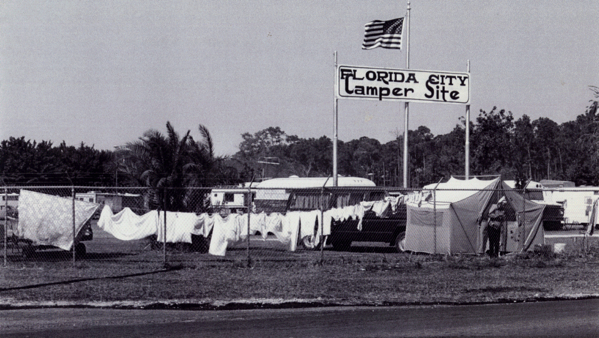 So who was Bryan H. Edwards?

Bryan H. Edwards was born on December 24, 18772 in Macon, Georgia, the son of James Wilson Edwards (1846-1903) and Penelope Bryan. In the 1900 census of Macon, Bibb County, Georgia, Bryan was enumerated with two brothers, James W., Jr. and Richard S. and a sister, Susie W., in the household of his parents.3 His father was the son of James Corson Edwards and Elizabeth Griffing Hunt. James C. Edwards was a cotton-buyer and land agent in Macon. Bryan’s mother, Penelope, was the daughter of William and Penelope Bryan, who were enumerated in the 1860 census of Twiggs County, Georgia. In that census, William Bryan’s real estate holdings were worth $71,040 and his personal estate was valued at $60,770.4 In 1870, after African-American slaves were freed, he was enumerated in Dooly County, Georgia with no assets, either of real estate or personal.5 Bryan’s father worked for the book publishing firm of J. W. Burke & Co. in Macon for 30 years. John W. Burke was a prominent preacher and a wealthy publisher in Macon.

Bryan’s uncle, Harry Stillwell Edwards, born on April 23, 1855 in Macon, Georgia, graduated from the Mercer University School of Law in 1876 and was a journalist and editor of the Macon Telegraph newspaper in Macon.6 7

In 1900, Bryan married Jacqueline Slappey,8 the daughter of Jackson W. Slappey and Fanny Slade Prescott. Jackson’s parents were George H. Slappey and Nancy Ball. In the 1860 census of Macon, Bibb County, Georgia, G. H. Slappey had real estate worth $63,000 and a personal estate valued at $90,000. After the war ended, those values declined to $45,000 and $6,800, reflecting the loss of George’s slaves.9 Bryan’s social connections in Macon enabled him to take a place in high society quickly. In the 1904 Macon City directory, he and his wife, Jacqueline, lived near the intersection of Napier and Holt and he was a clerk at the Acme Brewing Company, the largest brewing company in Macon and one of the largest in the South.10 Bryan and Jacqueline had two children: Constance, born on March 29, 1902 and Jacqueline, born on August 16, 1904, both in Macon.11 In 1905, the family moved into a house at 114 Coleman Avenue. The house has since been demolished for the expansion of Mercer University but it was in a neighborhood where the movers and shakers of Macon society lived.

By 1910, Bryan had moved on to be part of the management team of the Macon branch of the White Provision Company, a large meat packing company with headquarters in Atlanta.12 13 In 1912, Bryan and others applied for a charter for the Georgia Pecan Orchard Company14 and in 1913 applied for a charter for the Southern Package Manufacturing Co., which would manufacture crates, boxes and barrels.15 In 1914, he was the vice-president of the Griffin-Edwards Construction Company and also the secretary of the Southern Package Manufacturing Company, both located in Macon, Georgia. In 1914, he partnered with Walter D. Griffin of Macon to form the Griffin-Edwards Construction Co.16 The 1914 and 1915 Macon City directories show him as the vice-president of the Griffin-Edwards Construction Co. and the secretary of the Southern Package Manufacturing Co. In addition to all of these business activities, he became associated with the Troy-Honduras Co., which was an export-import business with headquarters at 1 Wall Street in New York City that did business in Honduras. The company sold building materials, machinery, automobiles, groceries and general merchandise and imported lumber, hides, coffee and other products from Central America. It had offices in Potrerillos, Amapa Camp and Jaral, Honduras. It was founded by Thomas W. Troy, who was born in Alabama and lived in Macon.

Bryan lived in Potrerillos from December of 1914 and left, for the last time, in September of 1918. His wife had visited him earlier in 1918 and returned to the United States via New Orleans aboard the ship S. S. Quimistan, sailing from Omoa, Honduras on July 7, 1918.17 He was the general superintendent of Troy-Honduras Co. there during that time.18

In February of 1918, he and his wife visited Florida City and purchased 10 acres of land on the prairie.19 They were pleased with the climate in South Florida as it was similar to that of Honduras. That likely was a major factor in their decision to locate in Dade County. After renting a house for a little over a year, Edwards purchased the former Hunt Hospital on the Dixie Highway at 8th St. in 1920. He and his family moved into the house after E. J. Franklin and his family, who were living there, moved to Fort Lauderdale on May 24.20 It was to be his home until his death in 1934. 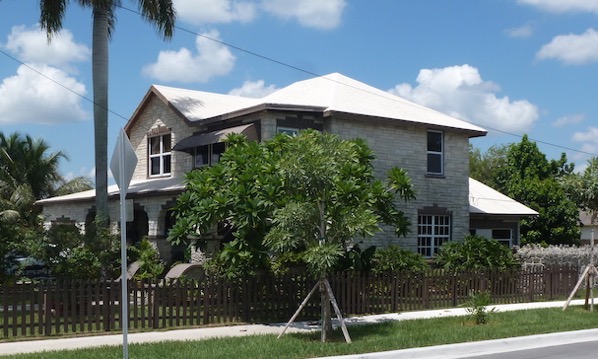 Edwards established the Florida City Lumber Co. in 192021 and the company cut its first log that September.22

Edwards was granted a license to sell real estate in 192123 and he got to work right away, placing advertisements offering his services in each issue of The Homestead Enterprise and, when The Homestead Leader was established in 1923, in that paper also. 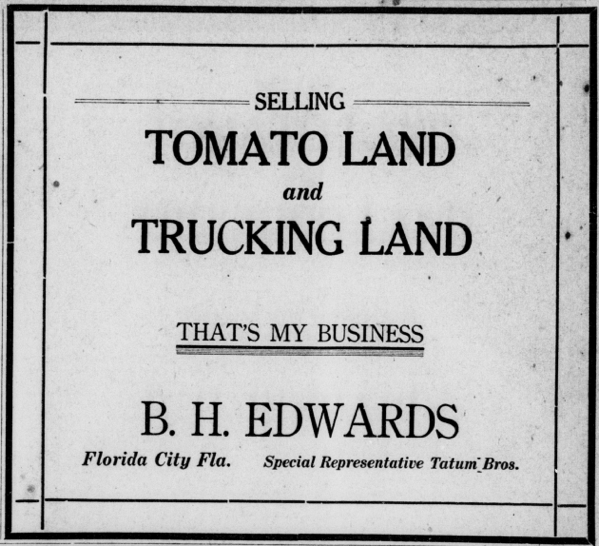 On March 13, 1922, Edwards defeated Edward Stiling, 93 – 20, in the race for mayor of Florida City.26 He was re-elected to his 7th consecutive term as mayor shortly before he died in 1934. As a realtor, he was associated with B. B. Tatum and the Miami Land & Development Co. and promoted their ventures. One, an oil well to be drilled southeast of Florida City on the Key Largo road, was promoted as early as 1922 but actual drilling didn’t begin until 1927, when the well had been drilled down to a depth of 987 feet.27 That well was part of a real estate promotion scheme on the part of the Tatums to sell more of their land in the East Glade.28 In 1924, he promoted a plan to grow banana plants between rows of citrus in the East Glade, mimicking a practice that he had seen in Honduras. In 1925, he extensively remodeled the house he had purchased in 1920. It had formerly been the Hunt Hospital and was a rather modest home. Edwards built a larger house, wrapping the new construction around the old shell and adding the rock wall that surrounds the house and that is still there. The construction was supervised by Andy Terburg.29 Edwards was involved in a number of civic affairs and was active in agricultural circles as well as in the Redland District Chamber of Commerce, where he was elected to a director position in 1926, along with Annie Roberts, wife of Daniel M. Roberts, the first woman to serve on the Board.30 In 1931, he was elected president of the Redland District Fair Association, which put on the annual fruit festivals and he helped form the South Dade Grower’s Association, a co-operative for farmers who weren’t happy with the services they were getting from other co-ops in the area.31

Edwards suffered from heart disease, which seems to have been genetic, as several male ancestors in his direct line died in their 50s. After 1931, newspaper mentions of Edwards dropped off significantly, perhaps because he was not able to be as active as he once was. Bryan H. Edwards died of heart disease in a hotel room in Miami while on a business trip on August 13, 1934. His funeral, conducted from his home in Florida City, was attended by hundreds. The hearse bearing his body received a motorcycle escort composed of representatives from Homestead, Miami and Coral Gables on its journey from Florida City to Miami, where he was buried in Woodlawn Cemetery